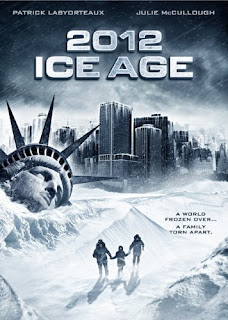 This brief exchange of dialogue neatly sums up the brain-numbed stupefaction I felt after watching 2012: Ice Age, a typically poor ‘mockbuster’ from those masters of the art, The Asylum.

The film owes a huge debt – not least for copyright infringement – to Roland Emmerich. Having pinched the title to his end is nigh blockbuster 2012, the film then shamelessly ransacks the plot of his earlier disaster opus The Day After Tomorrow.

The apocalyptic storyline involves volcanic activity in the Arctic, which causes colossal glaciers to head towards America at 200mph. Yes, 200mph. I just wish the film had moved at a similar speed rather than its interminable, endurance sapping crawl.

Unlike Emmerich’s films, 2012: Ice Age forsakes awe-inspiring special effects in favour of human drama – not least because that’s infinitely cheaper than expensive CGI wizardry. Its doomsday scenario revolves around the Hart family’s efforts to rescue their daughter from New York, which is slap bang in the path of the ominous, oncoming glacier. 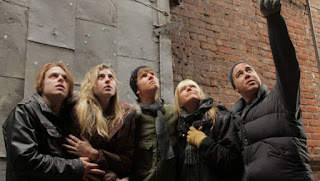 Such is their overwhelming love for their progeny, Dad, mum and irritating teenage son are compelled to jump in a car and drive eight hours to the Big Apple, telling their daughter to wait for them at her apartment. They then risk life and limb making a cross-country dash as violent arctic storms and plunging temperatures precede the glacier’s advance.

Fortunately for the Harts, however, the success of their journey appears preordained, as they seem unable to encounter the merest difficulty without finding yet another car with the keys conveniently left in the ignition. Such acts of good fortune are mere trifles though, compared to the biblical miracle that occurs later.

The Hart’s receive a garbled phone call from their daughter, who tells them she can’t stay at her apartment. With no information as to where their daughter could now be, the Harts push on regardless to the disaster-struck city of 20 million people. “We’ll find some sort of clue,” Papa Hart assures his brood. 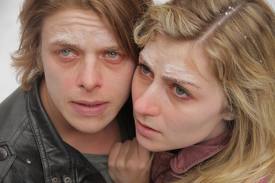 After arriving in New York, reality momentarily intrudes on the plot, and they temporarily fail to find any clues. Without a plan worthy of the name, they fall back on a disaster movie failsafe and simply run around shouting their daughter’s name.

With icy Armageddon enveloping New York and the streets of the sprawling metropolis filled with panicking citizens, one might be sceptical about the potential for success with this strategy. Oh, cynical you. Naturally, their daughter happens to be within earshot and the family are happily reunited in minutes. Just to re-cap: the Harts enter the equivalent of three Londons during a world-ending panic and finding someone in two minutes. By shouting. Nice. 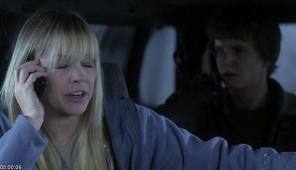 Now, as distracting as this preposterous sequence of events is, a nagging thought may be troubling you. And it’s this: why didn’t the Harts just tell their daughter to leave New York, and use all that time she spent twiddling her thumbs to get safely away from the forthcoming disaster zone? I don’t know either, and I’ve bloody watched this rubbish.

Anyway, while all this is playing out, the US military declares war on the glacier. The newly christened ‘war on ice’ sees the super-power’s entire arsenal mobilised to halt the icy advance. Never in the field of human conflict has so much firepower been used against a giant ice cube. I almost wanted to chant “U.S.A, U.S.A...”

The military response gives the filmmakers the perfect excuse to add a chopper fireball to the ‘end of days’ action, when a military helicopter is hit by icy debris following another bombing run on the glacier.

Low. If you’re familiar with The Asylum’s film output you’ll know what kind of CGI quality to expect – broadly akin to an child‘s crayoned drawing that‘s been crudely animated.

The chopper pilot makes the all-too-familiar error of hovering too close to the blast zone. Realising his fate, he meets his doom with a heroic, impassive stoicism. Either that, or he can’t act.

First known destruction of a helicopter by flying ice cubes.

There’s one hugely enjoyable scene in the film, albeit for the wrong reasons. The Harts encounter a family stuck by the roadside, who will freeze to death unless they’re picked up.

Papa Hart compassionately argues they should let the family come with them, even if it means being diverted from the task of reaching their daughter.

Mama Hart selfishly insists they can’t afford to be distracted from their goal, even if it means a chilly demise for the poor unfortunates. This fascinating moral quandary is unexpectedly ended when, as they continue to bicker, a giant chunk of ice falls from the sky, squashing the family to death.

The Harts drive on. The incident isn’t mentioned again.

But for some bungled directing, there could well have been two exploding helicopters in this film.

As the volcanic activity rips the arctic ice shelf apart, a scientist idiotically hovers too close to the sulphurous emissions and appears to lose control of the chopper.

Just as you’re expecting to discover the grisly fate of the pilot and the helicopter, the action cuts away, never to return.

“So, you’ve declared war on the glacier?”
“That’s right.”

Review by: Jafo
Posted by Exploding Helicopter at 07:02