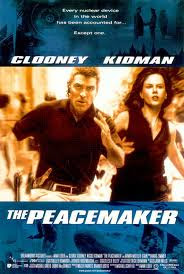 Who remembers The Peacemaker (1997)? It was, as you’ve doubtless forgotten the first offering from DreamWorks – the new Hollywood studio founded by Steven Spielberg, Jeffrey Katzenberg and David Geffen.
They were three of the biggest names in the entertainment firmament. They were going to tear up the old, stale, Hollywood production system and create multimedia entertainment fit for the new millennium. Then they gave us The Peacemaker (1997). A beige little film that was a triumph only of blandness. Oh dear.
Opening in a church in war-torn Bosnia we witness a mysterious assassination. Next, we see a rogue Russian general stealing a train loaded with nuclear warheads. He plans to use them to obliterate the UN building in New York. The only people that can stop him are nuclear scientist (Nicole Kidman) and a maverick, special forces soldier (George Clooney).
All of which sounds like familiar thriller territory and not the new dawn in entertainment DreamWorks had promised. Aside from the cooker-cutter storyline, it’s the protagonists - poorly constructed plastic characters - that really grate here. The two leads are textbook ‘chalk and cheese’ characters who struggle to relate to each other before predictably realising that they hold the same values underneath.
That would be fine, but the problem is that both leads fail even to make the grade of functional stereotypes. Clooney, supposedly a roguish, maverick army lieutenant (as if such a thing exists) simply comes across as a solid, dependable, military man. More John Major than John Rambo.
Kidman’s character is just as poorly constructed. After witnessing Clooney kill a bad guy, she is initially shocked and traumatised. Minutes later, she's gazing moodily out of a car window, wearing her best ‘Am I bovvered’ expression as George mechanically mows down a vehicle full of terrorists.
In fact, Clooney and Kidman appear to be acting in totally different films – neither of them particularly good.
Anyway, to the main business at hand: the exploding helicopter. Chasing the rogue General, Clooney and his special forces extras, sorry I mean team, have to illegally enter Russian airspace in three helicopters. The Russkies activate their air defences and fire a surface-to-air missile that neatly catches the middle chopper plum on the nose. “Instant chopper fireball,” as Alan Partridge would say.
Artistic merit

It’s a good explosion, with the chopper clinically picked off before plummeting out of sight. Disappointingly though, the camera doesn’t linger on the devastation and simply moves on. Director Mimi Leder clearly isn’t an exploding helicopter enthusiast.

None. I think it’s fair to say surface-to-air missiles have knocked out many a rotor blade, probably quite a few over Russian airspace.

The Peacemaker is a monument to the fact that no-one is perfect. It’s nice to know that, like the bottom drawer of my bedside cabinet, Clooney and Kidman also have things they are probably ashamed of.

In one scene we get to see Clooney in shapeless cream slacks and a baggy polo shirt. Even an action star like Sir Roger Moore in his prime 007 pomp would have baulked at that.
Posted by Exploding Helicopter at 22:34