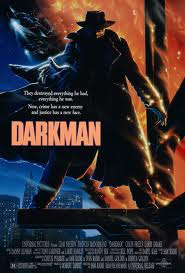 I never read comics as a kid, so I’ve always felt at a disadvantage when watching the latest big screen adaptation. Shorn of any background knowledge, it was as if a level of enjoyment was always going to be denied to me.

So, in that respect, Darkman should be perfect for me. Unable to secure the rights to The Shadow, director Sam Raimi created his own tragic hero hell bent on vengeance. In every respect it’s a comic book adaptation, just without being actually based on one.

Westlake is confronted by Durant and his goons. He’s tortured and left for dead when his laboratory is blown up. Only Westlake survives, horribly disfigured and unable to feel pain.

With the world thinking him dead, Westlake vows vengeance. Using his knowledge of synthetic skin, he creates lifelike masks of Durant’s henchmen allowing him to infiltrate Durant’s gang, and search for the mastermind behind the conspiracy.

The story arc could be drawn from any classic DC Comic series, and is given some dramatic ballast by Westlake’s attempt to re-establish his relationship with Julie. But while the plot has all the right ingredients, it always feels somewhat less than the sum of its parts. 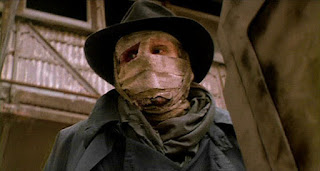 Maybe it’s because, aside from Westlake’s personal revenge, all that is at stake is the success of a property deal. And really, it’s too hard to care much about that.

Still there’s other things for us to care about, in this case the small matter of two exploding helicopters.

As the film moves towards the climax Westlake is hunted by Durant who, armed with a grenade launcher is buzzing around in a helicopter. Westlake tries to board the chopper, but is beaten off. It looks as if he’s going to plunge to his death, but he grabs onto a rope hanging from the helicopter. 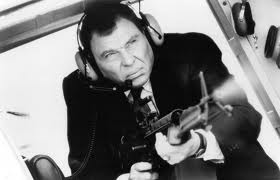 Durant starts firing the grenade launcher indiscriminately at Westlake who’s continuing to dangle from the rope. A police helicopter spots the carnage and gives chase, only for Durant to take care of it with his heavy weaponry.

This leaves Durant free to finish off Westlake. They try to drop him in front of some oncoming traffic, but this only allows Westlake to attach the rope to the top a truck that‘s conveniently about to enter a tunnel. Unable to gain altitude the helicopter smashes into the entrance of the tunnel.

We always like to see a lengthy helicopter sequence at the finale of a film, and this is a doozy. The coup de grace comes with two excellent pre-CGI helicopter explosions.

I particularly enjoyed how the wreckage of the second helicopter is towed into the tunnel by the lorry as it’s still attached to the line which dragged it to it’s doom.

You have to admire Westlake’s improvisation in a tight spot when he attaches the line on the helicopter to the lorry. There’s a similar scene in Tomorrow Never Dies and Derailed, however, Darkman is the earliest example we’ve seen yet of downing a chopper by securing it to another vehicle.

There’s some actors I always think of as being old, so the surprise here is getting to see a youthful Liam Neeson in the film‘s lead role. Yet oddly he still looks kind of middle-aged.

Regardless, Neeson brings his usual bored solemnity to the role. Quite how he has managed to maintain a career as a Hollywood leading man eludes me.

Frances McDormand cuts an unsympathetic love interest in this one. Apparently Julie Roberts and Bridget Fonda were both lined up for the role at various points. McDormand was only drafted in at the last minute and was apparently a pain in the balls to work with. It shows.

Sam Raimi regular Bruce Campbell appears briefly in a cameo at the end of the film.

Review by: Jafo
Posted by Exploding Helicopter at 18:31