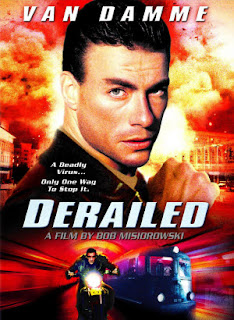 If ever you want to understand how an action star’s lustre has dimmed just look at the number of “euro-thrillers” on their CV.

Around the turn of the millennium, a whole generation of 80s action movie stars were deported on mass to Eastern Europe.

Unable to trouble the American box office, they were first forced into DTV exile, and then condemned to ply their trade in the Europe’s far flung corners - where the cheaper production costs made it possible to eke out a living.

Derailed (2002) marks Jean Claude Van Damme’s first foray into this twilight existence. Filmed in Bulgaria but set in Slovakia, Van Damme plays Jack Christoff an intelligence agent who has to escort a spy (Laura Harring) carrying a biological weapon across the border.

With the airports watched, Van Damme and Harring have to let the train take the strain in order to escape the country. Unfortunately, along for the ride are a group of terrorists who want to snatch the deadly bio-weapon, and Van Damme’s family who have, with ill-timed spontaneity, turned up to surprise Daddy.

A promising enough premise, you may think. Indeed so promising we’ve already seen it filmed as Under Siege 2. But quibbles over originality aside, with a half decent cast and script Derailed could still have made an entertaining film.

Unfortunately, the euro-thriller is characterised by poor direction, leaden scripts and casts populated by third rate actors. Just one of these traits is usually enough to sabotage a film’s potential. Fatally, Derailed has all three. 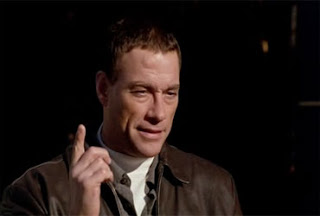 The other irritant – also typical of the euro-thriller – is the bizarre geopolitical conception the writers seem to have of the continent. In their world, European countries have dispensed with national identity, and handed all responsibility for their affairs to international bodies.

“Get me NATO command!”, someone barks in a risible moment of convoluted drama. Later, someone tries to inject some faux urgency into the line: “We need to call the World Health Organisation…. Now!”

Clearly, the writers of this rubbish seem oblivious to the fact that Europe has individual countries with their own national governments - though curiously JCVD’s native Belgium went nearly two years without one - who don’t run to the first supra-national organisation whenever a crisis arises.

Still, while the scriptwriters feel free to take political liberties at whim, their bravery doesn’t extend to deviating from conventions of the DTV action film - and a helicopter explosion is duly included.

The terrorists plan to escape with the bio-weapon, involves being evacuated from the train by helicopter. As their leader tries to shimmy up the ladder that’s been lowered from the chopper, Van Damme stops their getaway by securing the ladder to the train - preventing the helicopter from flying off.

With predictable misfortune for the pilot, a tunnel is fast approaching. Unable to gain altitude, the pilot fights a desperate battle with his controls. To no avail, and the chopper smashes into the side of the rocky outcrop with predictable fiery consequences.

This report card has to be marked - could have tried harder. A little crafty editing means we don’t actually see the helicopter explode - too expensive no doubt - and our mind’s eye is left to fill in the blanks the camera has left. Instead, we’re left with an unsatisfying fireball - all whites and yellows, no dirty, oily reds and oranges.

The director, in a moment of artistic license, has Van Damme - who was still on the train roof - showered with wreckage from the explosion. However, If you think about the physics of the situation - trust me, I have - that’s completely illogical. 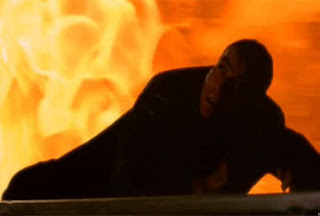 Tying helicopters down to prevent their flight, is a method of destruction we’ve seen before. Derailed is almost an action replay of Darkman except with a lorry, instead of a train, pulling the chopper towards its tunnel wall demise.

There’s a dumbly enjoyable sequence where Van Damme rides a scramble bike along the roof of the train to avoid the terrorists. It’s shoddily executed, but closer to the type of entertainment I’m looking for.

The entire film – which is surely the nadir of Van Damme’s career. If he’s made a worse film, I’d like to know what it is - if only so I can make sure I can avoid it.

Tellingly, director Bob Misiorowski never helmed another film after Derailed. However, there does seem to be one interesting detail amidst an otherwise unexceptional CV – a writing credit on Mrs Columbo.

This TV series was a short-lived and ill-fated spin-off from the detective show of the same name, where the running joke was we never meet Mrs Columbo, despite hearing about her in each episode.

This sacrilege was received with utterly predictable fury by Columbo’s dedicated fans. Such was the opprobrium heaped on the series, it was hastily renamed as Kate Loves A Mystery and all references to Columbo were excised before it died an unlamented death after one series.

Review by: Jafo
Posted by Exploding Helicopter at 21:48