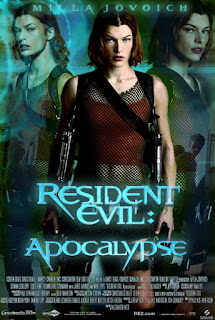 In the all-boys school of action cinema Milla Jovovich will always be the Prom Queen.

Her sanctified position in the minds of teenage boys - and *cough* some men who really are old enough to know better - a consequence of the shortage of ass-kicking heroines.

This, the second in the Resident Evil franchise, was probably intended to be her coronation. Unfortunately, the crown is nearly stolen from her with the introduction of Jill Valentine played by Sienna Guillory.

So, while Guillory is coolly ass-kicking zombies in a mini-skirt and neon blue boob tube – searing herself into the impressionable minds of male viewers – Jovovich spends the first act wandering around ineffectually in a shapeless bed sheet. Later, it gets worse as Jovovich is required to run round in a dirty string-vest, looking like a female Rab C Nesbitt – if you can conjure such an image.

One wonders if such sacrilege would have been allowed had franchise honcho, and Jovovich’s husband, Paul WS Anderson been on directorial duties again. However, he was off directing his ‘dream’ project Alien Vs Predator. Yes, that’s right ‘dream’. Well, at least someone enjoyed it.

Anyway, let’s put these feminine rivalries aside for a moment. The plot - such as it is - is commendably simple. Resident Evil: Apocalypse picks up directly from where the first film finished, when a group of hapless, unarmed scientists simply release the zombies from the underground bunker where they were neatly incarcerated.

Mind-boggling idiocy this may be, but it does at least get the film going. The liberated zombies soon overrun Raccoon City, which is sealed off ahead of a nuclear strike which will, in delicious diplomatic double-speak, “contain” the situation.

This leaves Jovovich, Guillory and company, to fight their way across the city to rendezvous with the last evacuation flight. Once away from the city, they aim to expose the Umbrella Corporation’s disastrous T-virus experiments.


Now, I’ve not mentioned Nemesis - a kind of super zombie - until this point. And that’s because I’m not entirely sure how he fits into all this. He’s been ordered to kill Jovovich, only it’s complicated by the fact he was her friend before he got turned into a lumbering, mutated member of the undead.

Anyway, our heroes and Nemesis wind up on top of a building for the inevitable showdown. It looks like curtains for Jovovich when a couple of Umbrella choppers fly in to finish everyone off.

But with wearying predictability Nemesis ‘remembers‘ Jovovich and, rather than try to kill her, bazookas one of the helicopters. It explodes, causing the other helicopter to detonate as well.

Above average. The method of destruction is unimaginative, and the reason the second helicopter ignites is unclear. However, an impressive amount of wreckage hurls itself towards the camera and our heroes - conveniently killing off Nemesis whose usefulness to the plot has now ended.

First known destruction of a helicopter by a genetically mutated zombie?

Sienna Guillory is returning to the franchise - this time in a red boob tube - in Resident Evil: Retribution, set for release in September. I’m in the queue already.

In the film’s epilogue, it looks like we might get to see a third chopper fireball when the nuclear strike on Raccoon City causes the helicopter, which Jovovich and friends are escaping in, to crash.

But with one eye clearly set on franchise sustaining possibilities, the helicopter isn’t allowed to explode as everyone needs to survive.

In the audio commentary for Resident Evil, Jovovich tells Anderson that it was only her “commitment” to the role and the film which meant she was prepared to allow one of her nipples to be seen onscreen.

Anderson challenges her, saying if she was really “committed” to the role she’d have allowed both to be shown.

Now, I don’t think I’ve ever been under any illusions as to how cynically these films attempt to manipulate the baser instincts of their audiences, but when Jovovich displays her *ahem* full commitment to Resident Evil: Apocalypse, I couldn’t help feeling just a little bit dirty and used.