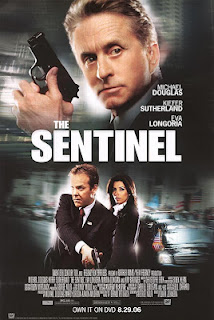 He’s now tasked with protecting President Ballatine (David Rasche) from a multitude of nutcases who see the US president as the Great Satan.

Despite being, in real life, a recovering sex addict – literally hundreds of women have apparently been traumatised by the nightmarish sight of his jowly, slightly dead-eyed features grimacing at the moment of release – Douglas still insists all his films must include gratuitous rumpy scenes.

And so, naturally, his character ends up having an affair with the First Lady (Kim Basinger). Well, he is part of the President’s close protection team. Anyway, this leads to a compromised Douglas being manipulated and framed for an assassination attempt by an ex-KGB ‘mole’ within the Secret Service.

The guardian now becomes the quarry, as Douglas tries to prove his innocence by finding the rogue agent while being pursued by squinty-eyed protégé David Breckinridge (Kiefer Sutherland). To add an extra frisson to proceedings, Sutherland is letting a personal beef cloud his judgement.

What might that be, you ask? Well, I was as surprised as you’ll no doubt be to learn that, not content with dipping his wick in the White House, Shagger Mike’s been boffing Sutherland’s wife as well. Chances are he’s also slipped one to the wife of the mole trying to frame him, but sadly the film doesn’t include that plot strand.

Indeed, in what is a deeply implausible film, by far the greatest stretch of imagination is being asked to believe that Pensioner Mike – with his pot belly and legs so bony dogs would try to bury him if he wore shorts – is a human shag-magnet.

Director Clark Johnson has impeccable small screen credentials, having been at the helm on Homicide, The Shield and The Wire, but is sadly let down by a script with more holes then a slice of Emmental.

No amount of obtuse camera angles and kinetic direction can hide the confused plot (Sutherland is supposed to hate Douglas but just suddenly forgets that and becomes his best friend again), implausible behaviour (immediately after the President has been attacked by machine-gun welding maniacs, the First Lady strolls innocently into the middle of the shoot-out and is captured) and poorly fleshed-out characters (Eva Longoria’s rookie Jill Marin could have been played with equal gusto by a Topshop mannequin. But, presumably, Big Mike would still have shagged it.).

Despite passable performances by Douglas and Sutherland, the film is a major disappointment. When the mole is uncovered, the results are as thrilling as a rainy weekend in Margate. Think of it as a poor man’s The Fugitive meets an equally poverty stricken episode of 24.

Here at EHHQ we have reviewed many turkeys which have been redeemed - at least in part - by a decent helicopter explosion.  Here we’re given a double kick in the balls: an underwhelming film combined with a lacklustre chopper fireball.

So what happens? El Presidente flies to Camp David to press the flesh with foreign dignitaries, arriving stylishly in Presidential chopper - a huge VH-3D Sea King, which is excitingly named Marine One.

As it leaves Camp David, we see a panoramic shot of the helicopter in the distance. Then, without any warning or preamble, a missile snakes up from the tree line and hits it.

It appears to explode in slow motion and break into two. We don’t see anything but the briefest of close-ups and we do not see the wreckage hit the floor. The whole thing is over in a flash.

This is a spectacularly poor effort with a bodged, distant, explosion rendered in disappointingly obvious CGI. The confusing preamble only serves to make the scene feel like it was stitched into the movie at the wrong point.

We’re struggling to see any in this one.  We’ve seen Marine One destroyed before in Independence Day. I think we’ll consider this particular explosion an ‘unnovation’.

We don’t know for sure, but seeing as no major characters were onboard, no doubt everyone died a fiery and unpleasant death.

Without doubt, Michael Douglas has the finest head of hair in the Secret Service. Period.

It feels as if a key scene was cut out in the build-up to the downing of Marine One. Perhaps it was a misguided attempt to make explosion have more of an impact on the audience. Unfortunately, the lack of exposition only adds to the general confusion and half-arsed nature of the story.

David Breckinridge: “Pete Garrison was my best friend. Until he slept with my wife.”

Apparently George Nolfi’s script had done the rounds in Hollywood for quite some time before being green lit and distributed in 2006. This might go some way to explaining the use of Russian baddies. Sooooooo 80’s.

Review by: Neon Messiah
Posted by Exploding Helicopter at 20:08