It may seem hard to credit now, but Ice Cube was actually something of a hot ticket in 2005.

Having starred in surprise hit comedies Barbershop and, er, Barbershop 2: Back In Business he looked like he had the potential to be a break-out star.

So when bullet-headed lunk Vin Diesel declined the opportunity to reprise his role of Xander Cage, Cube was given a shot at A-List stardom. Unfortunately, he should‘ve aimed more carefully, because he instead fired his blubbery arse straight back to b-list comedies. 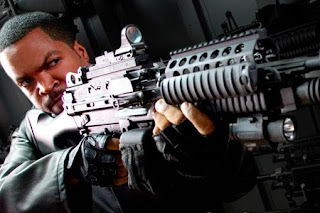 Suspecting that the attack came from rogue forces inside their own government, Jackson and Cube inevitably have to work ‘outside official channels’ to uncover the conspiracy.

In a startling break from his usual schtick in mainstream movies, Willem Dafoe here plays a creepy, sinister cartoon baddie. Who’d have thunk? So when his duplicitous Secretary of Defence suddenly attempts to take over the Presidency with a military coup, you can imagine I was as surprised as anyone. 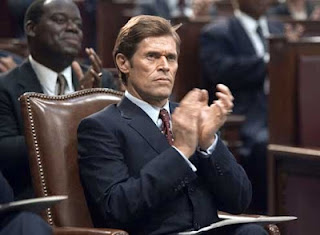 Part of the problem is the great petroleum-named one’s replacement, Ice Cube. He just doesn’t have the acting chops for a leading man, and his one-note ‘gangsta’ attitude begins to grind long before he and his ‘homies’ save the day.

The second issue is, ahem, how shall I put it, Cube’s well upholstered physique. Unquestionably, the boy can eat. This lends an unintentionally comic air to any scene where the rotund rapper is required to acquit himself athletically.

The film expects us to believe that the paunchy playa is able to leap across rooftops and out-sprint pursuers, while maintaining the blubbery frame of someone who looks like they’d be hard pushed to outrun a sweet trolley. 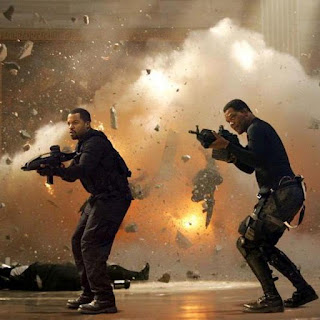 Ironically, there’s a running joke throughout film about the tubby tunesmith’s ongoing, frustrated attempts to get some fries and a shake. Which is odd, given it doesn’t look like he’s ever struggled to get hold of them before.

Suspending your disbelief for a film of this nature is obviously essential. But watching the bulky beatmaster labour his way through action sequences put a strain on my credulity only exceeded by the obvious strain on his own belt. It must be the only time in cinema history where the title of an action film refers to the star’s underpants size.

Add to the mix a misfiring comic sidekick (Michael Roof), the bland Scott Speedman (as a Government agent pursuing Cube), and an utterly wasted Samuel L Jackson, and you have a sequel which, as the poet Notorious BIG observed, has “mo money, mo problems”. Still, such cynical barbs aside, this isn’t all bad. Director Lee Tamahori gives the action sequences a superior gloss, and as mindless, undemanding entertainment goes it’s not a complete waste of time. Lukewarm praise, but it’s as much as I can summon.

Sadly, I can muster little more enthusiasm for the exploding helicopter action. To stop the conspiracy, Cube sneaks aboard an aircraft carrier where Willem Dafoe is planning his military coup.

Unfortunately, Cube’s portly profile doesn’t lend itself to covert infiltration and he‘s quickly discovered. In need of a rapid getaway, he jumps into a tank parked in the carrier’s below deck hangar.

To prevent his escape, another tank gives chase and fires on Cube, who deftly swerves out the way. Natch, the shell hits a helicopter that just happens to be sitting around unused. Ka-boom.

Blink and you’ll miss it. The chopper-consuming fireball is impressive, but it’s briefness is very disappointing. I had to rewind a couple of times to confirm that, yes, it was a helicopter.

You don’t see many helicopters destroyed by a tank. There’s famously one in Rambo III, where Stallone rams a Mil-24 Hind with one, but you don’t often see them taken out with cannon fire. This is the first one we’ve recorded.

Certainly, it’s the first known helicopter destroyed below deck on an aircraft carrier. 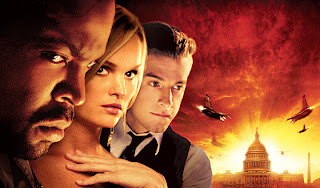 The high point of the film is the over-the-top action sequence aboard the aircraft carrier, where Cube engages in a tank chase aboard the vessel.

It climaxes when Cube, with his tank crippled, eludes his pursuers by attaching his tank to a catapult on the ship’s deck and firing the armoured vehicle at his opponent.

It’s every bit as preposterous as it sounds and perhaps it’s best not to wonder why there are so many tanks onboard an aircraft carrier. Just accept that logic and reason were barred from the set on this project.

Willem Dafoe sleepwalks his way through his role as the film’s villain. You can only assume he took this gig as one of his regular mainstream assignments designed to bankroll his artier offerings.

Still his appearance does give you a chance to again ponder what an extraordinarily flat face he has, rather like one of Zelda’s cubes in Terrahawks. 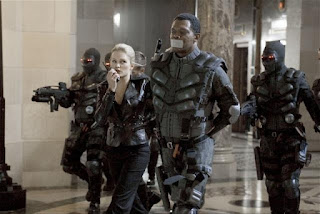 “By my count, you boys broke about ten federal laws back there: aiding and abetting, harbouring a fugitive, and my personal favourite - grand theft chopper.”

Review by: Jafo
Posted by Exploding Helicopter at 07:23