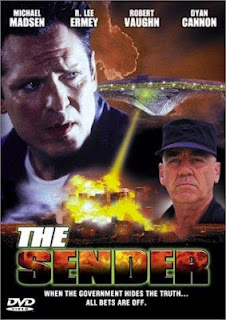 To crudely paraphrase Kipling: “If you can stay cool when everyone else is losing the plot, then you‘ll be one hell of a man.”

This piece of doggerel came to my mind while watching Michael Madsen in The Sender (1998), in which the slouching star meets a succession of preposterous disasters with a phlegmatic languidness that Kipling himself would have marvelled at.

Madsen plays Dallas Grayson, an army intelligence officer investigating the mysterious death of his father 30 years ago. But, as is so often the case in straight-to-DVD thrillers, his search for answers is about to uncover a far more incredible truth about his family.

Big Mike discovers that his father, an air force pilot, was shot down by aliens who are now in contact with his young daughter. It seems the wee scamp has something called the ‘Sender’ gene, which gives her unworldly powers and the ability to “open gateways to other worlds”.

Unfortunately, a secret Government unit dedicated to hunting extraterrestrials – led by grizzly R Lee Ermey (Full Metal Jacket) – has got wind of all this, and they snatch Madsen’s daughter so they can learn the source of her powers.

Half an hour in, the film – exhausted by such plot detail – simply turns into an extended chase sequence, as Madsen teams up with Angel (the friendly female alien his daughter had befriended) to rescue his wee bairn from the nefarious clutches of the Government. 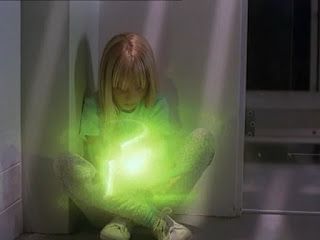 But how’s Big Mike coping? Facing such a distressing sequence of events, surely even a man possessed of the stiffest of constitutions might find themselves reduced to a jibbering wreck?

Madsen, though, is no ordinary man. Having found out in quick succession that extraterrestrials exist, that they butchered his father, and that his daughter is now some kind of genetic freak who’s been kidnapped by the Government, he adopts the expression of someone just told they’re all out of bacon so he’ll have to have the cheeseburger.

The boy is made of stern stuff. Surprise, shock, anger, fear – emotions which might trouble lesser mortals – are unknown to the man. His only reaction to each increasingly fantastical development is to slightly furrow his brow or, if it’s really bad news, tilt his head.

Indeed, so impassive is Madsen before unfolding events, not even the actual event of his own death can garner an observable reaction.

Yes, you read that right – not even his own death. In one corker of a scene, Madsen is shot dead by R Lee Emry, only to be brought back to life shortly thereafter by Angel. And yet, even after having his life miraculously saved by an alien dressed as a Seventies disco dancer, Big Mike is unable to muster any sign of relief, nor even mild curiosity.

Where lesser men might be hysterically exclaiming: “Who are you?”, “Why aren’t I dead?”, or “Why are you dressed in tin foil and wearing a silver wig?“ Madsen just drolly gazes into the middle distance. Perhaps this sort of thing happens to him all the time. 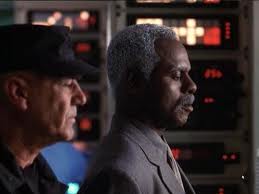 Given such imperturbable implacability, you begin to wonder what it might take to wring an emotional response from Madsen? Sadly, we never get to find out. Because even when reunited with his supposedly dead father, our Mike still doesn’t bat an eyelid. Instead, he casually suggests to his long-missing dad that they go and get some ice cream. Now that really is cool.

Given this laidback approach to the drama of life, it’s no surprise to find Madsen remains equally nonplussed by a near fatal run-in with a couple of military helicopters.

Having teamed up with Angel, Mike is aboard her spacecraft when they are pursued by two heavily armed choppers. Badly damaged, the spacecraft is unable to return fire, so dodges and weaves amid skyscrapers to evade their pursuers. 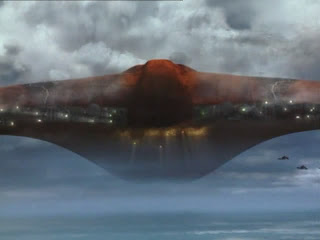 Our heroes are in a tight spot – not that you’d know it from the way Madsen lounges around in the spacecraft’s cockpit. Fortunately, the helicopter pilots are two of the dumbest fools ever to have taken to the skies.

Given a clear shot of the spacecraft, one chopper pilot unleashes a volley of machine gunfire, only for the spacecraft to niftily dodge out the way. The bullets hit the other chopper which has obligingly come round the other side and boom! Scratch one helicopter.

The remaining whirlybird continues the pursuit, as Madsen and Angel fly under a bridge. Despite it being clearly observable and entirely avoidable, the pilot – perhaps overwhelmed by the number of safe options he could take to avoid an imminent death – chooses to fly straight into it. Kaboom. End of chase.
Artistic merit

The sequence is rendered in low budget CGI, so wisely director Richard Pepin doesn’t linger on any of the explosions too long. Unfortunately, as a connoisseur of helicopter explosions, we like to linger over them. Overall, unsatisfying.

No great innovation, unless we’re prepared to count idiocy, and the new level of dunderheaded stupidity we witness in this scene. The chopper crash into the bridge heralds a new nadir in failing to avoid the bleeding obvious.

Michael Madsen is perhaps the greatest sunglasses actor of all time, rarely, if ever, appearing on-screen without a pair of Ray-Bans.

He takes them off, he puts them on – often several times within the same scene. Yes, it is hard to think how Madsen would function on-screen without this convenient prop.

And with Big Mike generally loathe to actually do any demonstrable ‘acting’, his sunglasses adjustments are about the only evidence that he hasn‘t just fallen asleep with his eyes open.

My favourite sunglasses moment in The Sender though, is one astonishing scene in which Madsen engages in a fist fight on the top of a moving lorry still wearing his Ray-Bans.

Despite taking numerous punches to the head, Mike’s sunglasses remain undamaged and perfectly balanced on his face.

While it may seem a little churlish in a film with aliens, kidnap, miraculous resurrections and reappearances, this was the most unrealistic moment in the entire film.

The former Mrs Cary Grant, Dyan Cannon, appears in the film as Michael Madsen’s double-crossing mother-in-law. Clearly she’s been no stranger to the plastic surgeon’s knife as her face looks like a melted marshmallow.

In an act of kindness, director Richard Pepin never shows her face in close-up. Either that, or he was worried that the close proximity of strong lighting would cause her face to drip completely off her skull.

I particularly liked this perplexing line: “All great discoveries are violent - like volcanoes.”

Review by: Jafo
Posted by Exploding Helicopter at 21:00