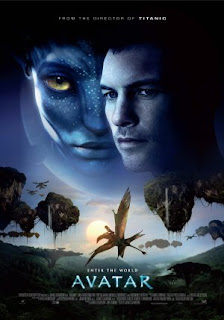 James Cameron is a man who doesn't like to do things by halves. His recent penchant for leviathan movies makes early output such as The Terminator look like twee Arts Council small fry by comparison. Not content with breaking box office records with Titanic, Cameron embarked on Avatar his most ambitious project to date. A concept he'd had to keep on ice since 1994 until the technology caught up with his expansive vision.

It might be the most expensive movie ever made, clocking in at a wallet busting $280 million, but wrapped up in all that beautiful CGI lies the heart of a bog standard outsider redemption story. A very, very expensive Dances With Wolves starring lanky blue alien hippies if you will.

In the future, mankind is running out of natural resources so nasty corporations have begun mining valuable minerals from the distant planet of Pandora - a lush jungle covered planet that has a very rare and valuable material called Unobtainium (Jesus, really!?).

In order to persuade the native Na'vi that raping their planet is in their best interests, scientists try to ingratiate themselves with the locals by creating Na'vi-human hybrids called Avatars. This allows them to blend in with the population and show them that we're not really greedy bastards, whose only interest is taking advantage of their planet for financial gain. 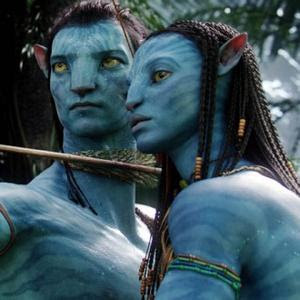 When the locals sensibly refuse to be bullied or bribed the troops are sent in to change their minds with some good old fashioned "shock and awe". Seriously, as an allegory for the Iraq war Avatar is about a subtle as a stiletto through the ball bag.

So when the brown stuff eventually hits the fan, Cameron goes absolutely bananas on the exploding helicopter front. I'm talking record territory here. As befits the most expensive movie ever made it contains no fewer than six chopper fireballs, of all of which are obliterated in the space of five hectic minutes.

I can see why over at EHHQ there who was much discussion as to who was man enough to review this behemoth. Lucky for you dear readers, I have big enough brass cojones to deliver on a payload of this magnitude.

Towards the end of the film the massed ranks of the Marines launch an all-out assault on the Tree of Souls, the spiritual home of the Na'vi. In their way is Sully (Sam Worthington), a paraplegic marine, who has gone rogue and thrown his lot in with the tree huggers.

He and his new buddies face a squadron of heavily armoured attack helicopters on nothing more than a bunch of emaciated pterodactyls armed only with bows and arrows. Despite these unfavourable odds they manage to achieve one of the greatest ever feats of helicopter destruction committed to film. Who needs Stinger missiles eh?

The first, sees Sully flying a huge dragon called Toruk (the Bentley of dragons) into the melee of choppers and space ships that have arrived to dispatch a six pack of whoop-ass on the natives. He grabs hold of the chopper in the dragon's talons and swings it around like a hammer thrower, launching it into a floating island where it goes up in delicious ball of flame. 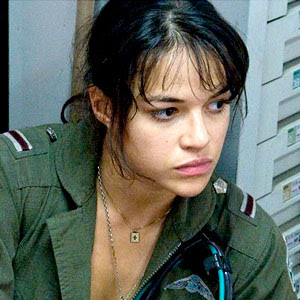 The second flicks across the screen so fast you almost miss it, but gets similar rock/flame treatment at the hands of another, smaller, Ikran.

The third and fourth are destroyed by what when they are flung into each other by an Ikran. Using a similar technique, one of the Ikrans grabs another chopper and flings it into the path of the other, making it split apart and fall to the ground in a plume of flame.

Lastly Hispanic-hardass turned deserter Chacon (Michelle Rodriguez from Lost) plays cat and mouse with Colonel Quartich's (Stephen Lang) spaceship behind a huge floating island. She manages to dodge and weave wave after wave of missiles and gunfire before inevitable succumbing to the colonel's fury. The stricken chopper is finished off with a missile that sends the machine to chopper-heaven in a rich tangerine burst of flame.

I remember watching this at the cinema in 3D and, for the first time in a long time (and maybe not since Cameron's other groundbreaker Terminator 2), felt truly blown away by a film's special effects.

Part way through this film, I distinctly remember realising that my mouth had been open for the last 45 minutes. That is how immersive it felt at the cinema. Yes, much of the plot is hackneyed feel-good fluff with a lot of clunky dialogue thrown in for good measure, but boy is it presented with panache.

3D movies are almost always gimmicky cash-ins designed to squeeze another £3 out of the punter whilst forcing them to do their best Buddy Holly impersonation but this one really is worth the money. The CGI blends seamlessly with the live action and you have to look very, very carefully to spot any glitches.

All the helicopter explosions are richly textured and authentically realised even though they all started life on a computer. The nine Oscars it won in 2011 including awards for Best Cinematography, Best Visual Effects and Best Art Direction show a lot of care, skill an attention was taken to realising this alternate universe

Six, putting it level with Charlie Wilson's War as the film with the most helicopter explosions ever.

Even the good guys die here. Chacon is sacrificed in the name of pathos and the rest of the anonymous pilots will surely not have survived the flames and impact of falling thousands of feet into the jungle canopy. This isn't Air America. 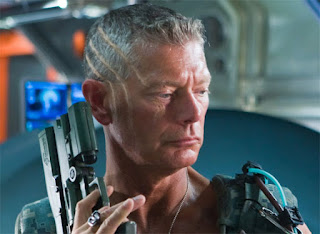 The two performances that really caught my eye were amongst the supporting roles. Giovanni Ribisi's hilarious performance as Parker Selfridge has echoes of Paul Reiser's corporate scumbag Carter Burke in Aliens.

As is the norm with amoral corporate money men he really is only interested in the company's bottom line, no matter how many lives he has to ruin. His comic interludes inject some much needed humour in a script that does stray into cliché territory from time to time.

Sample line: "You throw a stick in the air and its gonna land on some sacred fern"

The other is Stephen Lang as Colonel Quartich a caricatured d*ck-swinging bullet-headed Marine who must be a distant cousin to Robert Duvall is Apocalypse Now such is his passion for "The Core" and his desire to blow stuff up. He is an irredeemably nasty piece of work with a nice line in military hard-arsery.

"You let me down son! So, you find yourself some local tail, and you just completely forget what team you're playin' for?"

Col. Quaritch: This low gravity'll make you soft. When you get soft Pandora'll sh*t you out dead with zero warning.

On average each CGI frame of the movie, equivalent to1/24 of a second, took 47 hours to render. With a running time of 178 minutes and with 60% of the film shot using CGI you start to see why the film had such a high price tag.

Posted by Exploding Helicopter at 16:54