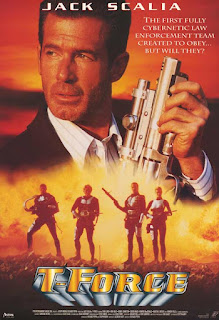 Roger Corman has just three rules for agreeing to produce a film.

So, had T-Force (1994) been pitched to the legendary filmmaker, I’ve no doubt the king of schlock would have whipped out his cheque book immediately – and might even have been momentarily tempted to break his golden rules. For not only does T-Force have the necessary strip club scene, it’s also got an exploding helicopter.

Yes, it’s fair to say T-Force doesn’t really try to rewrite the rules of exploitation cinema. In fact, it scarcely even makes an effort to rewrite the films it’s so obviously, ahem, inspired by.

In the near future, the police have a special unit of kick-ass killer robots called the Terminal Force – or T-Force – who are used to deal with the most dangerous situations.

Sent in to a skyscraper to end a hostage situation (think Die Hard), the robots (think Terminator) end up killing some innocent civilians. With a public relations disaster on her hands, the Mayor (Erin Gray) orders the T-Force programme to be shut down. Unfortunately, the robots find out they’re about to have their batteries yanked, and through some crazy circuit board logic decide that the Mayor must die (think Blade Runner).

The only man standing in the way of all this cybernetic silliness is Jack Scalia, an old-school, robot-loathing cop (think I, Robot). He’s joined by ‘Adam’, the only tinny member of the T-Force who rejected the Mayor-murdering plan, thinking it clashed a bit with his programme to ‘protect and serve’ (think I, Robot. Again).

In the finest tradition of mis-matched buddy cop movies, Scalia and Adam team up and stop the rogue T-Force members before they whack the Mayor. That’s assuming, of course, they can stop irritating and arguing with each other for three consecutive minutes. 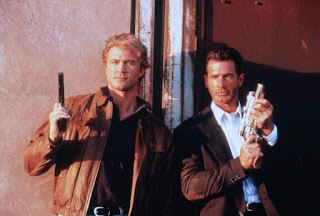 In typical PM Entertainment fashion, what follows is a riotously explosive 90 minutes of near non-stop action. Scalia is great as the grouchy, hard boiled, ‘shoot-first ask questions later’ cop, aghast at a future where the fun bits of his job – essentially, beating up punks and shooting people – are now done by robots.

Unlike Scalia though, we at EH headquarters aren’t fussed whether the real fun bits of films – exploding helicopters – are brought about by humans or cyborgs. Which is fortunate, as this is definitely what experts would term a robot-initiated chopper fireball.

And we don’t have to wait long for some ‘copter mayhem either, as the movie obligingly serves it up in the opening minutes. When the T-Force go in to deal with that initial, hostage-bothering skyscraper situation, the terrorists attempt to escape by fleeing to the roof where a helicopter is waiting to whisk them away.

They make it onboard, but the T-Force – having arrived on the job with enough weapons for a small war – fire a bazooka at the disappearing chopper. “Mission accomplished,” quips their leader as he surveys the whirlybird explosion.

Unexceptional. The helicopter explodes, completely and thoroughly. No wreckage falls dramatically from the sky. Rotor blades don’t shear off and spectacularly spin away. There’s just a big, screen-filling explosion, and it’s gone.

None. The method of destruction certainly isn’t new, and we’ve seen robots destroy helicopters in Terminator 2.

The great Vernon Wells has a juicy little cameo as the terrorist who seizes control of the skyscraper at the beginning of the film.

A hulking, imposing figure, Wells has a nice line in flamboyant villainy, with memorable turns as a mohawked, S&M biker punk in Mad Max 2, and as the chain-mail vest wearing Bennett in Commando.

Here, somehow squeezed into a grey double-breasted suit, Big Vern looks rather ill at ease while trying to impersonate a suave criminal mastermind. Still, he retains the inimitable mad glint in his eye that’s the hallmark of his best work. 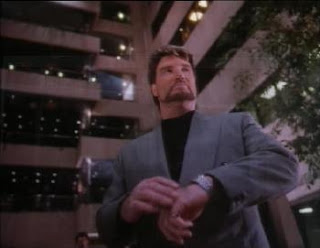 Director Richard Pepin falls into the all too common trap of having the robots act like emotionless automatons. One of the reasons Blade Runner remains so eminently watchable is that Rutger Hauer and his cohorts get to act like real people, rather than flatly intoning their dialogue while maintaining a blank expression. If I wanted that from a movie, I’d just watch Keanu Reeves in The Matrix series over and over again.

Unfortunately, actors portraying the T-Force are required to give stilted performances, like lurching Frankenstein’s. Watching them act is almost as painful as having the old monster’s bolt shoved though your neck.

“Get me six hostages into the chopper and then blow the rest to hell.”

Still want more? Then check out a reviews by our buddies over at Comeuppance Reviews and DTV Connoisseur or have a listen to our podcast episode on the film. Listen via iTunes, Acast, Stitcher, Spotify or right here.

Posted by Exploding Helicopter at 08:53