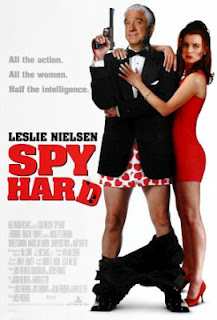 Formerly a stolid, patrician screen presence, Nielsen’s reinvention as dead-pan comic genius kicked off in 1980 with a film-stealing cameo in Airplane. It then followed a rather circuitous route – via the short-lived Police Squad TV series (now hailed as a classic) – to the box office bonanza of The Naked Gun trilogy.

Bizarrely, Nielsen found his greatest success by making a virtue of his inherent woodenness as an actor. With fame bestowed on him seemingly by accident, Nielsen understandably didn’t want to rock the money boat, and thus gamely churned out increasingly middling genre-spoofs for the next 20 years.

Of course, the trouble with any joke is that there’s only so many times you can hear the punchline before it stops being funny. Unfortunately, that’s precisely the point we reach with this lamentable secret agent parody. 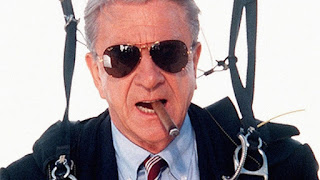 The notional plot sees Nielsen recalled to service when his old foe General Rancor (ho, ho) threatens to destroy the world unless he gets one of those new-fangled, all-powerful computer chips that villainous megalomaniacs always seem to covet. Naturally, it’s a wee gizmo that – by some never-explained mechanism – will allow the owner to control the world. Or something.

Anyway, with the world facing destruction or enslavement, Nielsen’s job is to stop the crazed General’s wicked scheme.

None of it makes much sense. The ‘plot’ – such as it is – is merely a vehicle for a conveyer belt of sight gags, dumb puns and slapstick. And if some of the jokes leave you with a sense of déjà vu, it’s probably because they’re thinly rewritten variants on ones you’d previously enjoyed in the Airplane or Naked Gun films.

Curiously, given the title, the film scarcely even attempts to parody the spy genre. Apart from lamely mimicking True Lies and the 007 films, the film relies on haphazardly spoofing contemporaneous films of whatever ilk. This results in a series of feeble skits based on scenes in Speed, Pulp Fiction, Home Alone, Sister Act, In The Line Of Fire and that well known spy classic Jurassic Park.

Quite why the scriptwriters adopted this scattergun approach is bemusing. As Mike Myers’ Austin Powers movie hilariously demonstrated, just a year after Spy Hard, there’s plenty of laughs to be had sending up the spy genre.

Hardly sophisticated fare, Austin Powers comes across as a comedy Citizen Kane, a work of rare comedic subtlety, in comparison with Spy Hard. The way in which it repeatedly and brutally clubs the viewer with a succession of crass and arse-clenchingly dreary gags quickly becomes unbearable.

This is never more true than in the film’s only stand-out sequence – one which is memorable for all the wrong reasons. 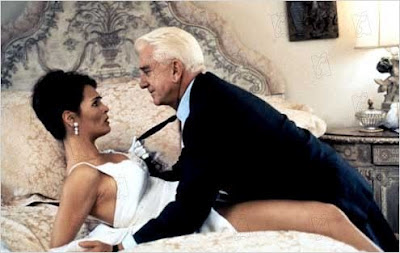 It’s a jaw-dropping comic misjudgement: one that makes the very marrow of your bones turn cold, leaving you with the kind of deadpan expression Nielsen wears throughout the film.

Anyway, let us turn away from such uncomfortable moments to the good, clean, uncontroversial fun of a helicopter explosion.

In flashback, we see when Nielsen and General Rancor first locked horns. Rancor tries to make a getaway from his hideout in a helicopter, but Nielsen secretly plants an explosive on its side, before detonating it with a remote control device.

When he spots Neilsen waving benignly at him from the ground, Rancor realises – in one of those karmic moments cinema so often treats us to – what’s about to happen. Boom! It’s a chopper villain fireball.

Much like the rest of the film, it’s a middling spectacle. Very brief, and the explosion looks like it was done with model work rather than CGI. 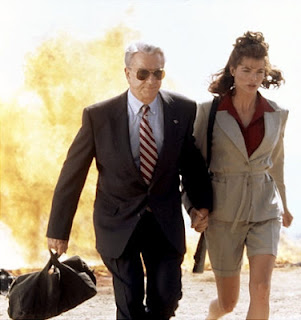 One. Or maybe two. Yes, in keeping with the half-arsed nature of this film, there may in fact be a second chopper fireball but we’re not sure. An explanation is needed, methinks.

At the very start of the film, we see Nielsen being flown in a helicopter by Mr T, where he receives a Mission Impossible-style briefing via an explosive tape recorded message.

Having accepted the mission, Nielsen skydives out the helicopter. Unfortunately for Mr T, Nielsen leaves behind the tape recording, which in the time-honoured fashion self destructs. We see a close-up of Mr T yelling, but we never find out if the explosion was enough to destroy the helicopter. Budgetry constraints, presumably.

Yes. General Rancor miraculously survives, albeit minus both his arms.

Spy Hard actually opens quite promisingly with a funny pastiche of a Bond film title sequence.
Sung by Weird Al Yankovic, and with a classic brassy orchestra-score, the visuals send-up the expensively produced sequences which are a hallmark of the 007 franchise.

It’s never a good sign when the best joke occurs before the film has even actually begun.
Negatives

During a lame parody of In The Line Of Fire, we witness Nielsen running down a road in slow motion. While watching the sequence you can’t but help but notice the unsightly flapping of Nielsen’s unusually large ear lobes.

They bounce around much like I’d imagine a startled elephant’s. It’s quite one of the most extraordinary sequences ever committed to celluloid.

“General Rancor wants the world, but he wants to kill you first. That may give us valuable time.”

Review by: Jafo
Posted by Exploding Helicopter at 20:09