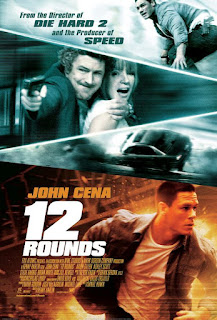 12 Rounds (2009) could have been a contender. After all, it’s a high concept thriller with relentless action sequences that are kinetically propelled along. With a top heavyweight in the cast, we could have maybe had a contender for minor classic status. Unfortunately, with bantam weight John Cena in the leading role, this remains a strictly amateur affair.

Cena plays Danny Fisher, a New Orleans cop whose life is turned upside down when a ghost from his past returns. Miles Jackson (Aidan Gillen), a dangerous terrorist Cena once arrested, busts out of prison intent on exacting an elaborate revenge.

So it’s gloves off, and Gillen kidnaps our hero’s girlfriend (Ashley Scott) before un-sportingly setting him 12 death-defying tasks (or ‘rounds’, geddit?) to complete if he wants to save her life. So much for Queensbury rules.

If the plot rings a distant bell in the punch-drunk recesses of your mind, it’s probably because it’s largely a reprise of Die Hard With A Vengeance. This comparison comes into even sharper focus when 12 Rounds inevitably delivers the same it’s-all-a-big-diversion-for-a-bank-heist plot ‘twist’ in the final round.

Now, it’s below the belt to criticise a film just for being unoriginal – I love too many formulaic films to even dream of doing that. But if you aren’t going to deliver a knockout blow with your plot, then the acting ring-craft on display needs to be first rate. 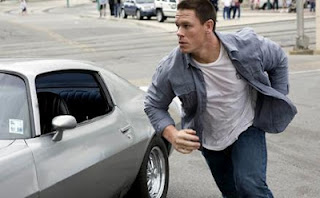 Unfortunately, 12 Rounds stars wrestler-turned-actor John Cena, a charisma-free presence whose performance makes you ache for a someone with real acting chops, such as The Rock. He utterly fails to sell the jeopardy or urgency of the film’s premise to the viewer. Other significant roles are equally ill-cast, with acting lightweights struggling to punch above their weight.

Aidan Gillen, left as the only decent actor in the ring, swings at his role in a half-hearted manner, seemingly unable to remember whether he’s meant to be attempting an Irish or American accent. ‘Hey, yoose guys, so it is, begorrah…’ etc. He also literally phones in his performance, since his role maroons him on the end of a mobile phone dishing out the instructions for each task. 12 Rounds, two accents.

In fairness, none of the actors are helped by a horrendous script which, when it isn’t jabbing you with cliché, pins you against the ropes and pummels you with ‘hurt bombs’ of exposition until you‘re almost begging to throw in the towel. 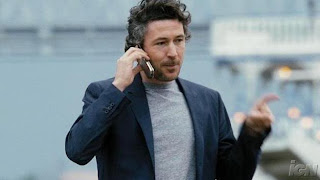 In one clunking early scene, we’re introduced to Gillen’s character as he’s being covertly tracked by the FBI. Despite being mid-operation, the FBI commander suddenly decides to explain to everyone, for no earthly reason, exactly who Gillen is. Presumably no-one involved in this massive, sophisticated surveillance operation quite knew who they were following until this point. D’oh.

That said, 12 Rounds does earn some points on this judge’s scorecard. Director Renny Harlin – a favourite bête noire of this blog – comes out swinging and doesn’t let the pace drop throughout. This is crucial, since in terms of logic the entire movie has a glass jaw.

Commendably, the film also doesn’t pull any punches with its stunt work. Genuinely exciting, its thrills, spills, crashes and smashes seem to have been shot for real, without the use of CGI.

All told, though, 12 Rounds ultimately blows its shot at the title. It’s a shame since, if they’d given the script more of a work-out and put a better class of fighter in the cinematic ring, we might have had a worthy (albeit unoriginal) champion.

Still, that’s enough blethering on about the under-card – let’s have a blow-by-blow account of the main bout: the helicopter explosion. 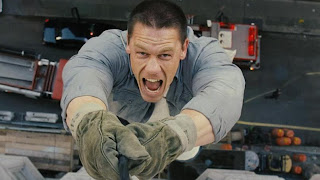 Still holding Scott hostage, Gillen attempts to make his getaway in a helicopter. Earlier in the film, it was revealed Scott earns her living as an air ambulance pilot. Hands up if you didn’t think that was going to turn out to be significant later on?

Having made it to the hospital’s roof where the helicopter is parked, Gillen and Scott are about to take off. Cena, in hot pursuit, only manages to board the chopper by making a daring leap onto one of its skid rails. I say daring, but given how frequently people in films successfully make this jump, it may actually be quite easy to pull off.

A struggle for control of the helicopter follows, during which a gun is fired several times into the chopper’s engine, causing Scott to lose control as Cena finally prevails in his brawl with Gillen.

Slumped at the back of the chopper seemingly down for the count, Gillen activates the timer on a bomb he‘s hidden away. With only a few seconds left before it explodes, and no hope of landing the chopper in time, our heroes appear doomed. 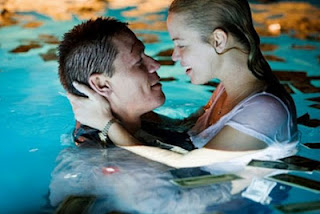 Until, that is, Cena spots a roof-top swimming pool. With only moments to spare, the pair jump to safety, landing with the dead-eyed accuracy of an Olympic high-diver in the centre of the swimming pool.
Meanwhile, Gillen the villain has a brief moment to wonder why he didn’t come up with an altogether simpler plan – or pick a film with a better script and co-stars –before the helicopter explodes.

What’s not to love about a film that builds its entire climax around an extended helicopter sequence?

Having commended the film for it’s commitment to CGI-free stunts, one must concede computer chicanery is used to render the helicopter explosion. It’s not a particularly fine example of the art, as the chopper unconvincing splits in half.

No great innovation in the detonation but, ludicrous as it was, I enjoyed the aquatic escape from the helicopter. I’ve not seen that done before – though surely, someone, somewhere, has.

Yes, the bland John Cena and anonymous auto-moppet Ashley Scott both survive – though the viewer is half hoping they’ll miss the pool and smack into hard, unforgiving, concrete.

During 12 Rounds denouement, there’s one superb moment of unintended hilarity.

At the start of the film, the scriptwriters establish that Cena and Scott’s relationship isn’t one of happy domestic bliss. “I’ve got to know I can trust you!” demands Scott, in what would’ve been a moment of high drama had she been talking about anything other than the fact Cena has forgotten to phone the plumber.

Having set-up this ‘trust issues’ story arc, we duly get the pay-off in the final reel. With Scott reluctant to jump from the helicopter, Cena barks: “Do you trust me?” We can only guess at the thoughts rushing through Scott’s mind at this moment: “Well, he did remember to pick up some milk last night, but then he did forget to pay the gas bill. Oh, and there was that time he left his wallet in the car.”

Fortunately, Scott decides that her certain and imminent death in a helicopter explosion trump any residual doubts she has about whether Cena is the kind of guy who always remembers to switch the iron off at the plug. She jumps.

Just in case Harlin was in danger of giving his film a puncher’s chance, he shoots the film in that jerky, hand-held, camera style so beloved of directors who want to add an edgy, pseudo-documentary style.

This is fine during the action sequences – it adds to the sense of fast-moving chaos. But when, for instance, you’re simply watching two people talking it just starts to feel like the cameraman must have Parkinson’s.

The whole effect is intrusive and leaves the viewer feeling nauseous, almost like they’ve taken a couple of haymakers to the chin.

The ball-achingly obvious: “Knockout, Danny! This time you’re not going to be saved by the bell.” I know, that really was the best they could come up with.

Posted by Exploding Helicopter at 21:24