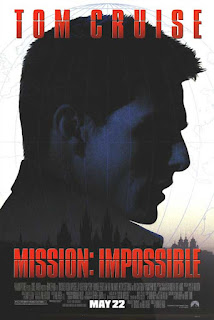 Given that the Cruiser, now half a century old, recently creaked his weary bones back into gear one last time for MI4: Ghost Protocol, now seems an apt time to look at the movie that started the whole wire-dangling, face-swapping franchise.

This original revamp of the Sixties telly series sees Tiny Tom playing Ethan Hunt, agent of the top secret Impossible Missions Force. Just how impossible these missions can be is amply demonstrated in the first ten minutes, when the team’s opening jaunt in Prague goes absolutely tits up.

Plainly, it’s not a good day at the office.

Almost everyone gets killed, a secret list naming covert agents is nicked and Tom gets blamed for everything. Going underground, he recruits two blacklisted, ‘disavowed’ agents (Ving Rhames and Jean Reno) to help discover the truth.

Surrounded by a parade of esoteric characters – grumpy Ving, creepy Jon Voight, pouty Emanuelle Beart, the inexcusably French Reno – Tom as ever plays the straight man. (Hey, no laughing at the back there).


Stern-jawed and po-faced, he bounces through the movie like a superhuman over-achiever. Multi-lingual, computer expert, impossibly tough and endlessly resourceful, it often seems there’s nothing he can’t do. Except act, obviously.


Still, it’s an entertaining rollercoaster of a movie. The justly-famous scene where Tom dangles horizontally on wires inches above an alarmed floor is wonderfully executed. In the space of ten minutes, it steadily builds tension and throws everything into the mix: scary rats, slipped wires, dripping sweat on touch-sensitive floors and even dropped knives. So expertly does it cause one’s buttocks to be clenched, they could market it as a sit-down aerobics exercise.

Shockingly, it turns out that Tom’s boss, the-slippery-lizard-made-man Jon Voight, is in fact a double dealing traitor. I know, who would have thunk? Finally revealed as an utter git while on a speeding train, Voight shoots his own girlfriend (for kicks, apparently) then – following the Golden Hollywood Rulebook of Questionable Baddie Behaviour – doesn’t just shoot the defenceless Tom square in the forehead.

No, instead he escapes to the train’s roof, where Tom’s supposed colleague Jean Reno is waiting for him in a hovering helicopter, snickering away like a garlic-scented Mutley. (Note: I did not pass out with shock at this point. As a French person in an American movie made in the Nineties, the odds that Jean was going to end up being a back-stabbing, nasty, cheese-eating surrender monkey were always fairly high. And so it turned out.)

What happens next is sublime. Ethan follows Voight and uses a dangling winch-line to tether the chopper to the train as it speeds into the Channel Tunnel. Somehow, both the chopper and Reno’s massive conk squeeze into the tunnel as Ethan – after two hours of almost superhuman prowess – suddenly struggles to land a punch on an overweight sexagenarian. The climactic ‘fight’ is on.

It all comes thick and fast. Voight untethers the chopper and jumps onto one of its landing skids: Ethan jumps onto the other one then sticks explosive gum to the windshield. Bam! Inevitably, the blast kills the baddies but just propels Ethan onto the slanted back of the slowing train. The blazing chopper crashes on behind him and its sharp rotor blades stop just short of his neck. Phew.

This is pretty much top drawer stuff: innovative, original and well executed. Over and above the special effects, the whole scenario is simply a very good idea.

This is stomping good fun, with some classic set-pieces and more twists than Beyonce’s weave. For some reason, exploding helicopters often seem to reside in the lower quality, straight to DVD end of the market (I’m looking at you, Steven Seagal) so it’s good to see a chopper fireball in such good company.

Clearly, there’s no arguing with his 30-year stellar status, but I’ve always found Tom a very limited actor capable of only two expressions: ‘shit-eating grin’ and ‘worried’. Obviously, the grin is regularly wheeled out (you don’t spend so much on a new set of gnashers without wanting to flash them on occasion) but the Cruise ‘worried’ look has become his hallmark, seemingly applicable to any situation.

Confronted by deadly aliens? Sacked from dream job? Faced with estranged paedophile dad? Whatever the scenario, Tom will – without exception – furrow his brow, tighten his mouth and dart his eyes about in a confused manner. There really is something of the Zoolander about him.

More worryingly, I saw the Cruiser being interviewed by Wossy a couple of years back and realised he can’t even really act being himself. The meaningful pauses, the cloying sincerity, the sudden, barking laughs: it all spoke of someone playing a role. Badly.

“This message will self-destruct…”

Can't get enough of our thoughts on Mission Impossible? Then check out our Exploding Helicopter podcast on the film. Listen on iTunes, Podomatic, Stitcher or YourListen.


Posted by Exploding Helicopter at 14:22