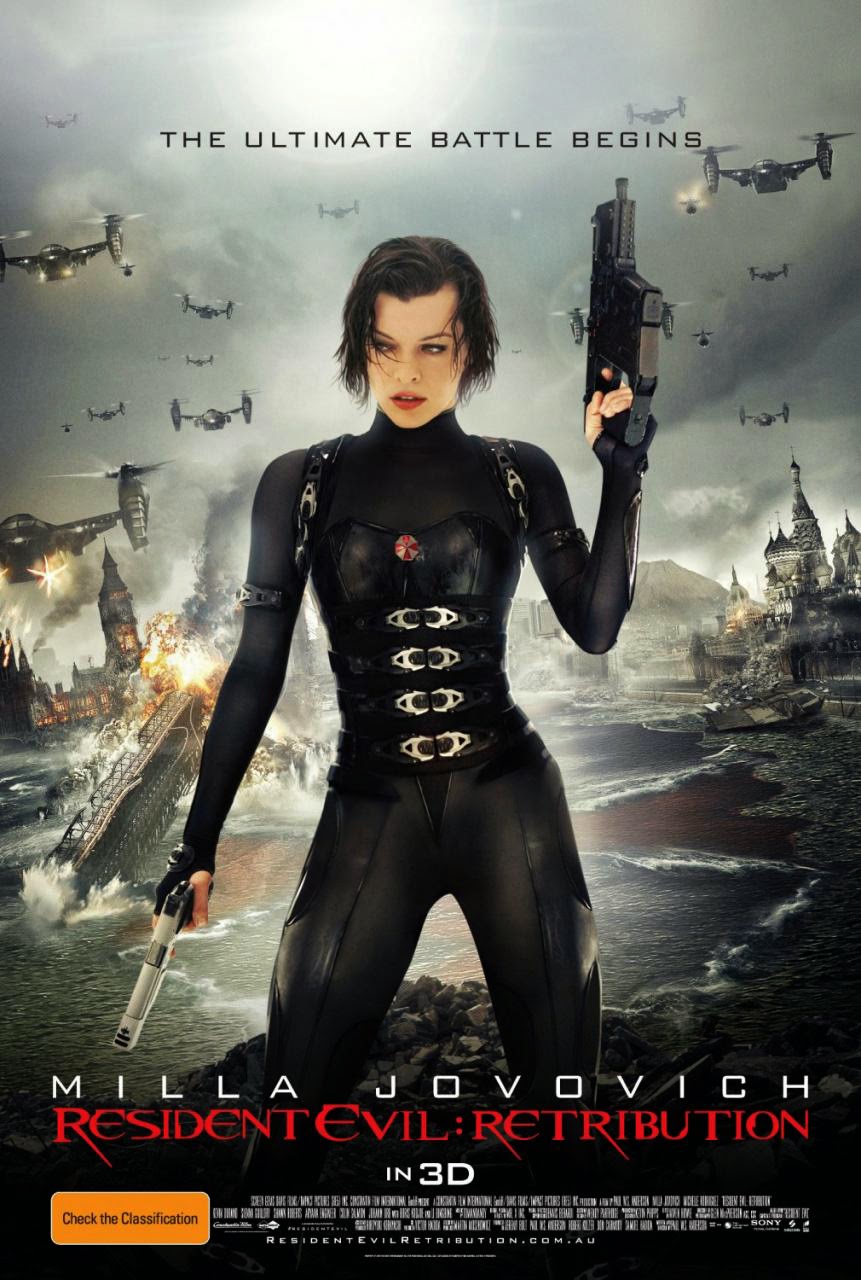 Impervious to criticism, immune to public opinion, and seemingly impossible to stop, the Resident Evil franchise lumbers relentlessly onwards in a manner uncannily similar to the zombies which populate its films.

Staggering into cinemas in 2002, the first instalment was met by near universal indifference. Since then, each successive film has received the kind of critical clobbering that would normally kill off anything living and breathing. Yet, like the undead, sequels have continued to rise from the grave with chilling regularity.

So, why won’t this series just lie down and die? Hard as it is to believe, the Resident Evil films have raked in a mind-boggling $1bn in global box office. No wonder instalment number six is set to lurch into cinemas later this year.

Here, we’re interested in outing number five, Resident Evil: Retribution (2012). The story picks up from the end of ResEvil: Afterlife, with Alice (Milla Jovovich) a prisoner of the evil Umbrella Corporation - the rogue bio-weapons company responsible for the zombie plague. Held in a secret underground facility, Jovovich must escape from the complex if she‘s to defeat Umbrella, save the human race, and star in the upcoming sixth film.

Given there’s no mystery in whether Jovovich will succeed in her task, the only puzzle worth pondering is how to explain the franchise’s continuing appeal? Well, Exploding Helicopter has thought long and hard on these matters and can explain in just two words: Milla Jovovich.

Yup, there’s really only one reason to watch these films and it’s to see the reigning Queen of kick-butt. Action cinema is seriously short of ass-kicking heroines and Milla’s films are about the only place you can watch a scantily-clad former supermodel wreak havoc with John Woo gunplay and Matrix-inspired martial arts. 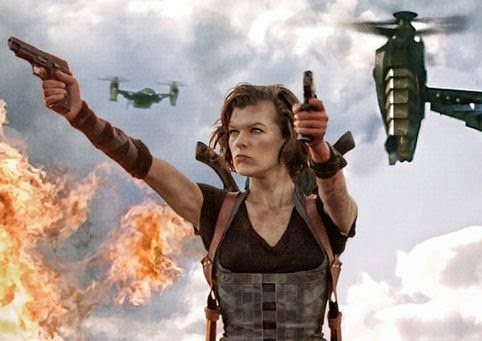 As a screen presence, she rather reminds me of Clint Eastwood. They both confront danger with the same intense impassivity, and Jovovich’s low, husky, croak is reminiscent of squinty-eyed Clint’s gravelly whisper in Dirty Harry. We’re just waiting for MJ to announce a ‘hilarious’ comedy with a pet orang-utan to complete the impression.

Now, one of the undisputed pleasures of franchise films is seeing how characters from previous films will be incorporated into the story. You only need look at the casting in the Fast & Furious series which operates like a greatest hits album with the most popular actors from previous entries packaged together for another money-spinning outing. However, ResEvil: Retribution takes this getting-the-gang-back together ethos to a new mind-mangling level.

Jill Valentine (Sienna Guillory), Rain (Michelle Rodriguez), Shade (Colin Salmon) and Carlos (Oded Fahr) - who all appeared in previous films as good guys - are confusingly resurrected as villains. Meanwhile Albert Wesker (Shawn Roberts) the villain of Resident Evil: Afterlife is - in a barely explained plot twist - now a goodie. For an idea of how ridiculous that all is, imagine sitting down to watch a new Avengers movie only to find Iron Man battling the Hulk, Captain America and Hawkeye for no discernible reason.

Even for a hardened ResEvil veteran it’s hard not to feel anything other than utterly lost. And it’s a feeling that isn’t helped by the fact nothing resembling an actual plot occurs until half an hour into the film. Still, while we wait for the story proper to begin, there is at least an exploding helicopter to keep us entertained.

In a flashback to the events which led to her imprisonment, Milla is aboard a freighter which comes under attack from a fleet of Umbrella helicopters. Returning fire with her machine guns, Milla shoots the pilot of one chopper as it heads straight towards her. With the pilot dead, the helicopter careens towards the deck of the ship, crashes and explodes.

No complaints about the actual helicopter explosions. The Resident Evil films always have a decent budget so the special effects are up to scratch.

What I will grumble about is that we only get to see one chopper explode. During this sequence the sky is thick with Umbrella whirlybirds and an excellent opportunity for a record breaking display of chopper conflagrations is lamentably missed.

Given this is sci-fi, the helicopters in Resident Evil universe are suitably futuristic with two distinctive rotor blades on the end of short wings. However, whilst you get to see a unique looking helicopter blow-up the method and style is yawn-inducingly familiar.

Milla Jovovich memorably announced herself in film by falling butt naked into Bruce Willis’ taxi in The Fifth Element. Since then she’s made frequent costume-less appearances in her films. It’s no different here, where in one scene she appears to be wearing a small tea-towel with no visible means of support.

The first 30 minutes are - in hindsight - entirely pointless. Essentially a drug induced dream experienced by Milla Jovovich’s character, they have absolutely no relationship to the rest of the film. Bizarre.

Milla summarises the plot for this, and perhaps every zombie movie ever made: “A lot of people died. Trouble was they didn’t stay dead.”

Apparently this is the first film in the series to not feature zombie dogs. I know, I was disappointed too.

Posted by Exploding Helicopter at 08:59