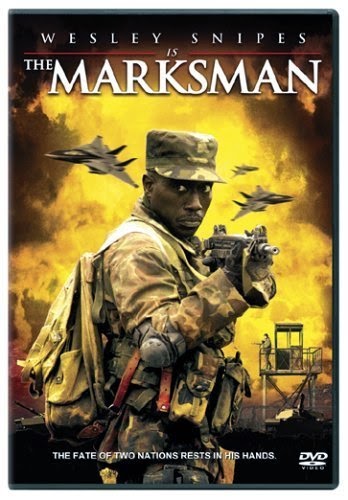 As a child of the eighties, Wesley Snipes has been an oddly curious presence in my life. He’s always been there, but only ever on the margin of things. In many ways, Snipes is like an estranged uncle, one who makes random appearances at birthdays and weddings, before vanishing for years without explanation.

Perhaps the reason for this peripheral existence is that despite a near 30-year career he’s never made an era-defining or life-changing film. Sure, there have been some very good ones (White Men Can’t Jump, Blade, Rising Sun), but never one for which he’ll always be famous. Today, sadly, Wee Wes is probably best known for his sudden bouts of amnesia when his tax bills were due, and for dire DTV fodder like The Marksman (2005).

The plot is straightforward. Snipes plays an out of work actor who has squandered his income and is now facing an upcoming tax bill that he cannot afford to pay. That’s not really the plot, but if it were it would be a darn sight more enjoyable than this tripe.

The actual story is thinner than wet Rizla. After Chechen terrorists take over a nuclear power station and threaten to blow it up, Snipes has to lead a team of special ops soldiers on a mission to infiltrate the complex and stop radioactive Armageddon. But before Wezzer can complete his mission, he must overcome a series of deadly action movie clichés.

First, there’s Snipes himself: a mysterious, but brilliant operative who is haunted by a mission that went tragically wrong. Then there’s the cardboard cut-out villain, a crazed Chechen warlord, who ruthlessly kills without compunction – except when he captures Snipes and his team (at which point he just ties them up so they can escape later and instigate his demise).

And finally there’s the obligatory double-cross. It turns out that the suspiciously helpful Russians are still bitter about losing the Cold War, and have been feeding the Americans false intelligence. It’s all a plot to trick Snipes and his men into blowing up the nuclear power plant. Oh! The Commie swines!

Of course, our Wes is the only one who figures this out. Not through a deep understanding of post-Cold War geopolitics, but by repeatedly muttering, “This is too easy” whilst wandering through a forest.

Now, most films would be embarrassed about blatantly pilfering plot devices. Not so The Marksman which, having tired of copying other films, decides to dispense with the charade and just reuse bits from those actual films.

Yes, in one shameless sequence a complete section of DVD actioner Active Stealth is inserted into the film. Together with the liberal use of stock footage of jets, tanks and other heavy weaponry, The Marksman begins to resemble a badly stitched patchwork quilt. Something that roughly resembles a film, but one made of up pieces that clearly don’t go together.

And, so to the reason I endured this film for ninety, retina damaging, minutes: the exploding helicopter. Thinking they have completed the mission, our heroes head to their extraction point where they are to be choppered away to safety.

Snipes realises it’s a double cross, but too late. One of the evacuation team, who is secretly working for the Russians, drops a grenade into the waiting chopper. With only a few seconds to spare, the marines run for cover as the chopper behind them erupts into a dirty black and orange fireball.

It’s a decent enough explosion. I guess it was a choice between a screenplay and a pyrotechnics expert.

None at all. We’ve seen helicopters destroyed by grenades as far back From Russia With Love in 1963.

There is one absolutely priceless moment in the film when the senior General tasked with leading the military response asks: “Do we have any guys with real combat experience?” which is followed by an awkward silence.

Now, you might think that the world’s only military superpower would have no shortage of such experienced veterans. Incredibly, it seems Uncle Sam’s armed forces are a straw man filled with pimply faced teens who’ve never fired a shot in anger and only Wesley Snipes is qualified for the job.

Several sequences are shot in the jerky handheld style used so effectively in the Bourne films and NYPD Blue. Unfortunately, director Marcus Adams’ efforts resemble less an edgy, cinema verite than simply a drunk dad trying to film the family barbecue on a cheap camcorder.

You can read other reviews on this film by friends of this website DTV Connoisseur and Comeuppance Reviews.
Posted by Exploding Helicopter at 11:11