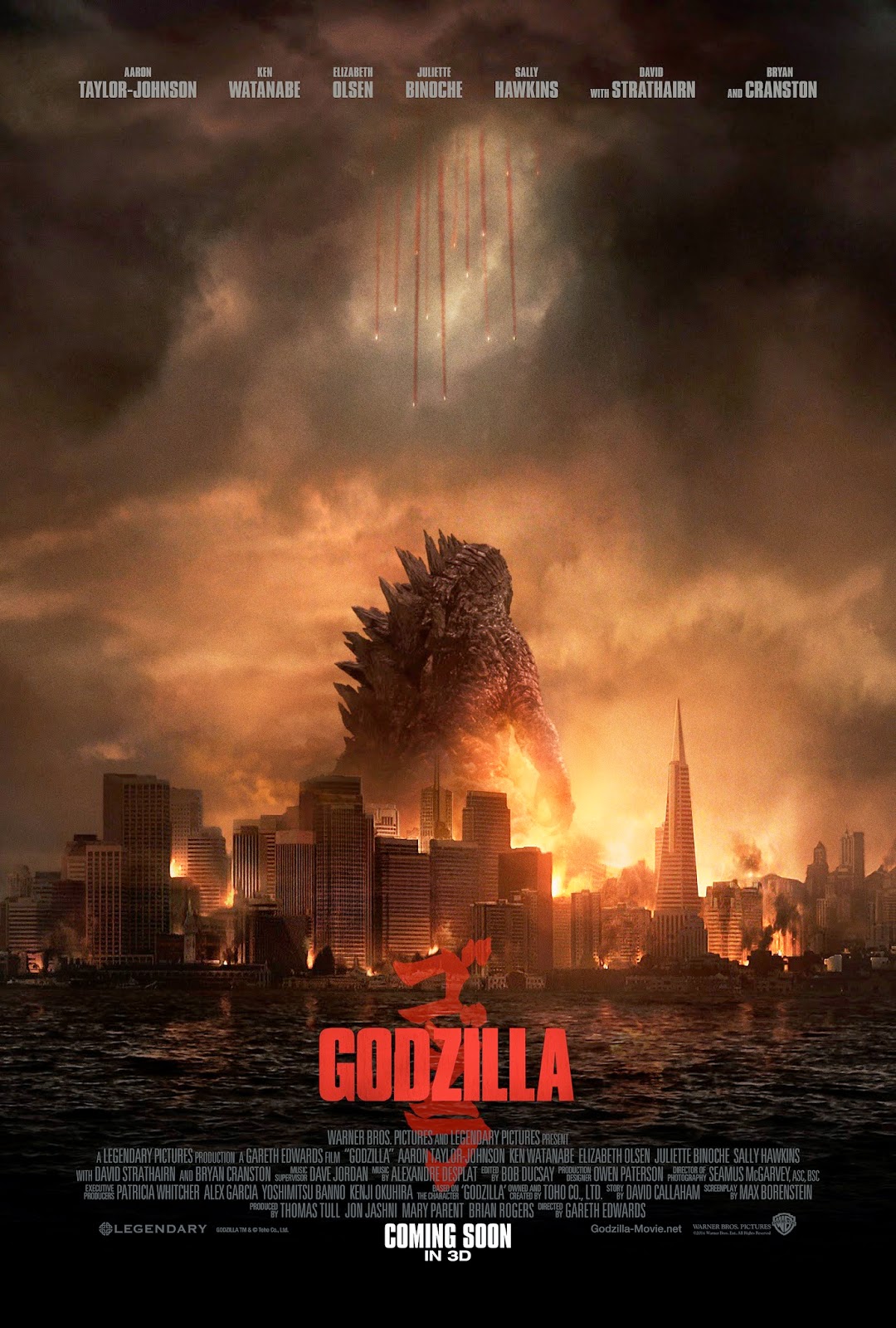 Who would have guessed that, in a movie featuring 300-foot tall, fire-breathing monsters, the most unbelievable characters would all be human?

Oh, dear. When promising newcomer Gareth Edwards was handed a £160 million budget for only his second movie – on the strength of his lo-fi (and low budget) debut hit, Monsters – hopes were high. But sadly, the Wunderkind has produced a steaming great pile of dino-plop.

Still, there is at least some good news: the monsters themselves are fabulous. They look sinister, they move convincingly and their guttural, ear-bending shrieks send a shiver down the spine. Besides Big G himself, there’s a couple of black, spindly, bird-like giants (called Mutos) who entertainingly go on a monster-sized ASBO rampage across the globe.

As for the director’s much-criticised decision to do a very slow reveal of the beasts (for the first hour, all you get are snatched half-glimpses or blurred images on TV screens), it actually works a treat. The gradual build-up of tension makes for a spectacular visual treat when the monsters are finally revealed in their full glory.

Equally, much of the disaster-style footage is spot on. A succession of images – ruined, tottering skyscrapers; battleships tossed about like bath toys; wrecked urban landscapes – really stick in the brain.

But then the actors have to go and ruin it all by speaking.

It’s true. The monsters may be levelling entire cities, but the film itself is ultimately brought down by a hokey plot, terrible dialogue and ropey acting. No-one emerges unscathed.

Bryan Cranston, afforded almost demi-god status after his turn in Breaking Bad, looks like a man who’s just realised how terrible the film is. He croaks and whines ineffectually for a bit, then wisely decides to die half an hour in.

Leading buff-boy Aaron Taylor-Johnson utters not a single memorable line, and merely bounces around from one action scene to another.

But it’s in the ‘war room’ that things really take a tumble. David Strathairn joins a bevy of lantern-jawed military types to bark out the usual guff about ‘having a visual’ and ‘needing situational awareness’.

Such scenes are rarely inspiring, but in Godzilla they are comically poor. Even the basic walking-and-talking choreography is noticeably bad. You can actually see actors stepping three paces to the left to find their mark before delivering a line. It’s desperately hammy stuff.

And it gets worse. Ken Watanabe, brought in to be the ‘Japanese’ guy, is little more than a cartoon. Every line he utters is a wise proverb, delivered with a pained look suggestive of constipation worries. His performance makes Cato from the Pink Panther films look nuanced.

By the time he ponderously pulls out an old time-piece (‘It…was…my father’s’) that supposedly froze at the moment Hiroshima struck, you haven’t the heart to point out a wind-up watch wouldn’t actually have stopped.

But, in a crowded field, poor Sally Hawkins carries off the worst actor accolade. Constantly fretting, worrying and semi-sobbing, she’s resembles nothing more than a modern-day Stan Laurel.

The piss-awful weakness of the human story here is strange, because the strength of the central characters’ relationship in Edwards’ Monsters was its defining quality. It all strongly suggests the studio leaned heavily on the young director to make a bland and accessible piece of pap.

All of which begs the question: why does Hollywood keep on giving blockbuster movies to auteurs? Suppose, say, someone was really skilled at flying a model airplane; you wouldn’t sit them in the cockpit of a commercial airliner and tell them to hit the thruster. But Hollywood does this all the time.

The very skills that make Edwards a good small movie-maker – strong personal vision, an ability to improvise, skilful handling of a small cast – make him a terrible fit for a baggy, committee-led blockbuster.

This point was demonstrated last year when the hugely talented visionary Guillermo del Toro managed to make the $190million Pacific Rim one of the most unwatchable films in recent memory.

The problem is simple. A blockbuster director is a particular kind of beast – usually a high-functioning sociopath – who’s generally mad enough to take on a studio, loudly threaten to resign, Fed-Ex their own doo-doo to the company president etc. Auteurs just can’t achieve such giddy heights.

Put it this way: you probably won’t see a lo-fi indie film about disenchanted shop clerks directed by Michael Bay coming to a cinema anywhere near you soon. So why are the sensitive types taking on such huge projects, especially when the results are so consistently dire?

And be assured, no cliché is left un-mined in this tosh. Cute kid noticing the monster first? Of course. (Twice.) Loved one trapped fatally behind glass door and sharing final moments with lover? Oh, yes. Hero improbably finding himself eye-to-massive-eye with the giant monster? Yes, about five times – it’s almost like they’re dating.

Ultimately, beset by demands to make a film anyone can like, Edwards has produced something that very likely no-one will give a toss about. Ironically, he is gobbled up by his own monster movie.

It’ll be no surprise to learn the chopper scene is poorly handled. Facing a monster with a reach of around 400-feet, the chopper pilot goes in shooting and flies right under its left nipple. Unsurprisingly, said beastie immediately swats chopper. Duh. What did the pilot think was going to happen?

This scene takes place at an airport, and there’s a nice shot of the nervy airport crowd watching from behind a huge glass wall as the chopper hits a few airplanes and triggers a series of explosions.

The short-lived monster and helicopter encounter has zero tension, and makes even less sense. Expensive, pointless, confusing: it could be a metaphor for the film as a whole.

Ken Watanabe is clearly in the movie purely for the moment when he stagily turns round, panto-style, and declaims: “They call him…GOR-ZIYYA!”

Despite the galumphing bad reviews for Godzilla, Gareth Edwards has just been handed the reins for the next Star Wars movie. Given the previous Star Wars trilogy featured some of the wonkiest acting on record (Hayden Christensen’s love scene with Natalie Portman regularly tops Worst Scene of All Time lists), they’ve clearly got the right man for the job.

Still want more? Then check out Jafo discussing Godzilla with a bunch of other cool folk on The Large Association of Movie Blogs podcast on the film.
Posted by Exploding Helicopter at 18:11