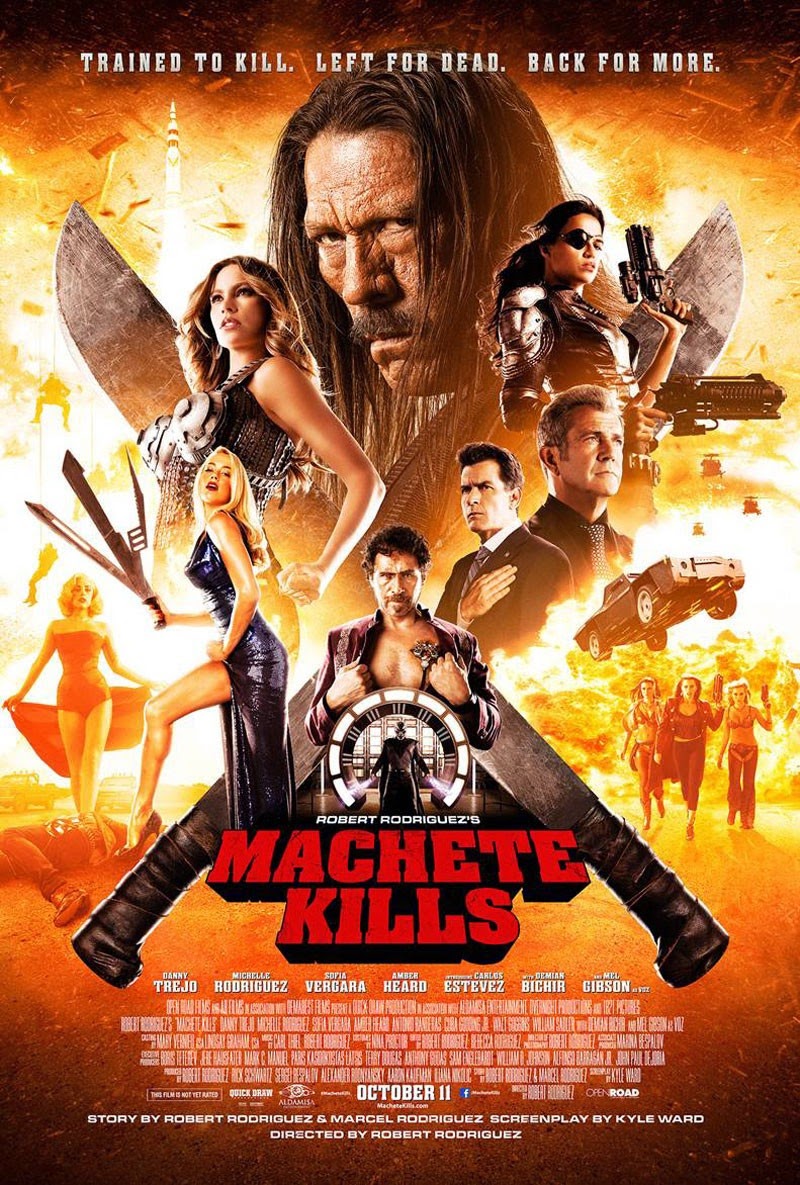 Is there a more unlikely action hero than Danny Trejo?

At the coffin-dodging age of 70, the hopes of most actors run no further than a warm cocoa and a nicely paid ‘exposition cameo’. But not our Danny, who’s instead decided to spend his pensionable years carving out (literally in his machete wielding case) a new career in action cinema.

It’s an improbable development, with an incredible story behind it. The two Machete films – Machete (2010) and Machete Kills (2013) – which have catapulted Trejo from bit-part status to leading man fame actually had their as a spoof (yes, spoof) trailer for Quentin Tarantino’s Grindhouse project. It’s now a fully blown franchise.

The story begins with a gang of Mexican revolutionaries threatening to nuke the United States. With the fate of the nation at stake, American President Charlie Sheen (taking a rare day off from getting ‘crack’ed up to the eyeballs and going on TV to talk gibberish) calls in everyone’s favourite oversized-knife-wielding Mexican to save the day. Dangling the prize of a US green card before him (because what else would any Mexican want?), the Prez hires Trejo to infiltrate the gang and stop the plot. But as our crater-faced curmudgeon cuts a steel-edged swathe through the villains, he learns that the nuke threat is just a diversion from another, much more deadly, conspiracy. Yikes.

So, having just celebrated his seventieth birthday, how does Trejo – the only man who can consider Arnold Schwarzenegger and Sylvester Stallone up-and-coming young pretenders - fare as an action movie hero?  For the most part, commendably well. Trejo has an undeniable screen presence, even if it’s in large part due the fact he looks like a tattooed Easter Island statue (only with less emotional range).

Here, that stoicism (or inability to act, take your pick) becomes a useful trait. With an intentionally preposterous plot, and the violence played for laughs (the inventive use of intestines is a series trademark), it’s important that somebody appears to be taking matters seriously and Trejo provides a poker-faced calm at the eye of the storm.

In many ways he’s like an action movie version of Leslie Nielsen who successfully dead-panned his way through 20 years of genre spoof silliness. Just don’t expect Trejo to warn someone not to call him Shirley, when brutally disembowelling them is so much quicker.

Still, it’s not all good. Despite the muscly Mexican’s best endeavours, Machete Kills is an uneven watch, jack-knifing from moments of inspired gonzoid invention to self-indulgent onanism. And there’s only one culprit: Robert Rodriguez.

Not content with writing and directing the film, Rodriguez also edits, photographs, produces and writes the music. Between takes he probably shoved a broom up his arse and swept the floor as well.

While you can’t fault this hands-on enthusiasm, the absence of collaborators or critical voices means the film frequently stalls, as Rodriguez amuses himself with another redundant scene. 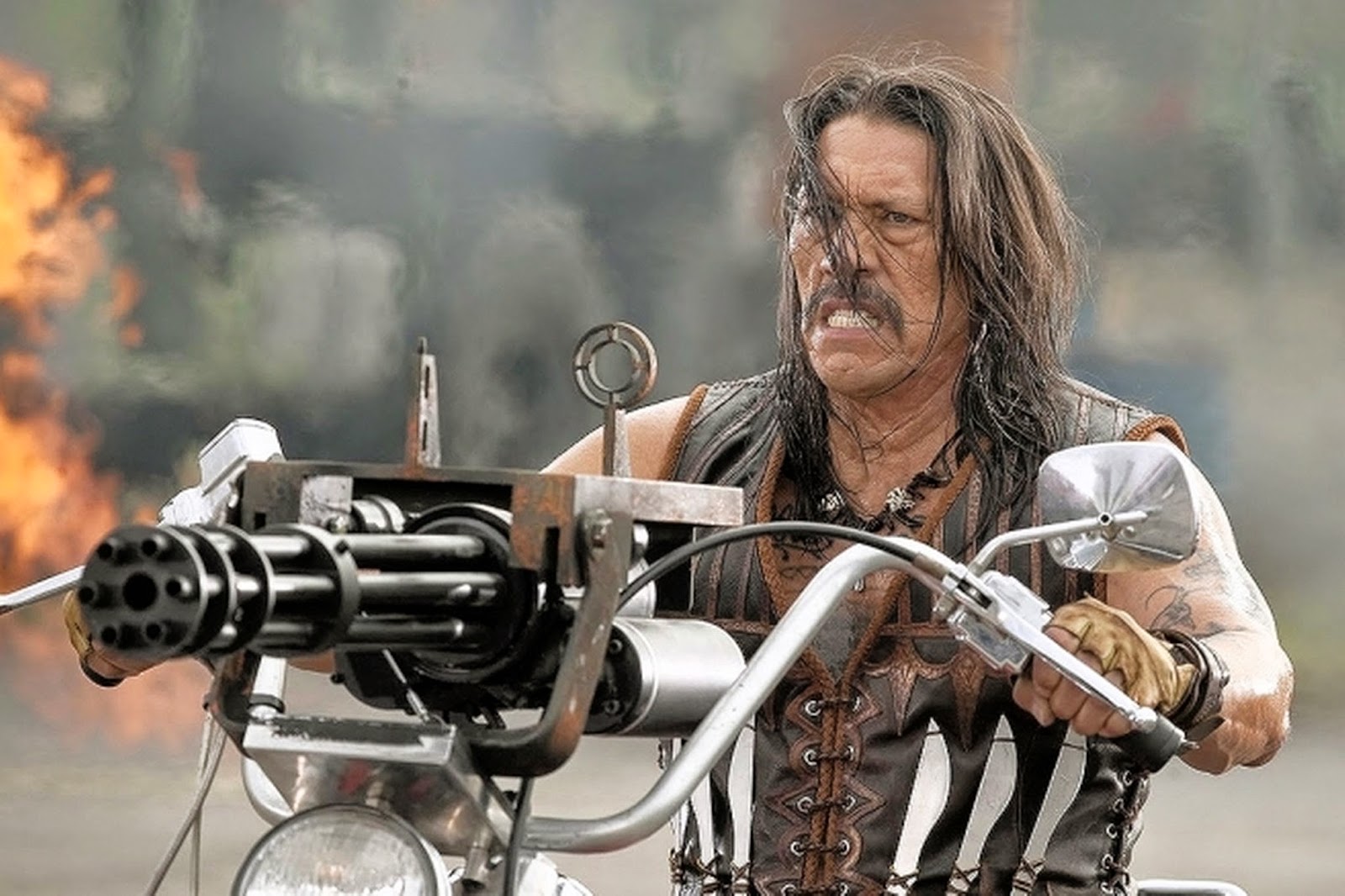 Exploding Helicopter couldn’t help thinking the film would’ve benefitted from the involvement of an old-school cigar-chomping Hollywood producer. The film badly needed the kind of artistic philistine who’d happily rip 20 pages out of the script without troubling himself about the integrity of the director’s artistic vision.

Still, there’s one happy by-product of Rodriguez giving full reign to his imagination: a truly inspired and unique exploding helicopter.

After kidnapping Mendes – the Mexican revolutionary holding the USA to ransom – Trejo tries to make his escape in a chopper, but is pursued by machine-gun-firing goons in a speedboat. Simply flying away would be much too straightforward for this film, so Trejo leaps from the helicopter into the speedboat and starts doffing up the henchmen. Having dispatched two of the goons in double-quick fashion, Danny Boy deals with the final baddie in virtuoso fashion.

With the pilot-less chopper still weaving about in the sky, Our pock-marked pensioner grabs hold of a fishing rod that’s handily lying around. He casts the line and hooks the helicopter on the end like it was a prize marlin. Attaching the rod to the troublesome villain, he triggers the spring-loaded reel causing him to be violently wrenched out of the boat. Whizzed towards the chopper, the hapless henchman smashes into the whirlybird which, of course, explodes.

Creative, inventive, entertaining, this is the very best kind of exploding helicopter. Watching this scene, celebrating it, it’s why we run this website.

Only known use of a fishing rod to destroy a helicopter.

Yes, Trejo and Mendes survive having made a highly improbable leap from the helicopter.

Rodriguez provides one of Exploding Helicopter’s favourite supporting artists, William Sadler (Die Hard 2, The Shawshank Redemption), with a juicy little part as a redneck Sheriff out to lynch Machete.

Always a classy presence, Sadler has largely spent his career in middling films and TV work. If you were to draw up a list of actors who deserves to be better used then Sadler would surely have to be on there.

Unfortunately, not every casting decision is as good. Lady Gaga appears briefly as ‘La Chameleon’, an assassin whose nickname comes from her mastery of disguise. The character actually serves little purpose in the film, other than to chew up screen time and provide Rodriguez with the opportunity to crowbar in pointless cameos from all his Hollywood chums, such as Cuba Gooding Jr, Walton Goggins and Antonio Banderas. (Though in fairness, this is probably the biggest acting gig Cuba Gooding Jr has had in about a decade.)

Apparently this is the eleventh time Danny Trejo has appeared in a Robert Rodriguez film. And with the film dangling the prospect of a further sequel - Machete Kills Again – it looks like the partnership isn’t going to end here.

Posted by Exploding Helicopter at 12:38