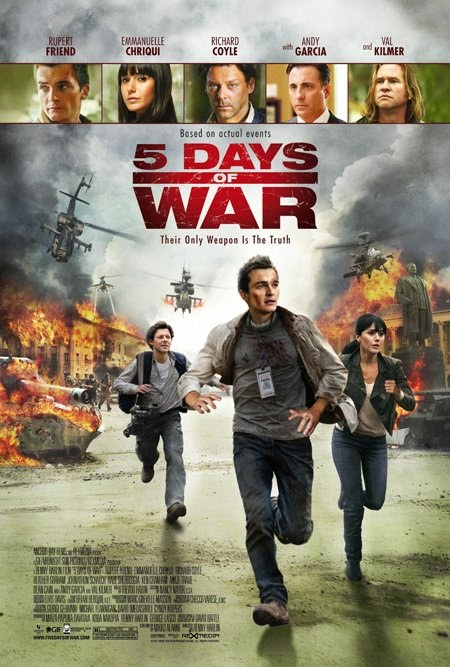 “The first casualty of war is truth,” reads the sombre quotation at the start of this ridiculous movie.

Well, they said it. In 5 Days Of War (2011), truth isn’t just a casualty – it’s punched in the nuts, water-boarded then blasted by a firing-squad before the opening credits have even finished.

Supposedly ‘based on real events’, this war drama tells the tale of plucky Georgia’s heroic resistance in 2008 against a Russian invasion. Most independent commentators reckon the blame for this messy conflict needs to be shared – but you’ll find no such namby-pamby even-handedness here.

The reason why is simple: the film was part-financed by the Georgian government. (Bizarrely, one of its ministers is even listed as a producer.)

The result, unsurprisingly enough, is a gallumphing piece of pro-Georgian propaganda. Swivel-eyed and angry, the movie ramps up the anti-Russian rhetoric so much it’d bring a blush to the cheek of a Fox News presenter.

The ‘story’ centres on Thomas Anders (Rupert Friend), an American journalist in Georgia to report on the war. While helping a Georgian family flee the fighting, he films Russian soldiers cold-bloodedly executing civilians – then has to daringly escape through the frontlines with this damning evidence of evil Russkie war crimes.

Will he make it? Could the truth finally be revealed to the world? Does anyone remotely care? No.

There’s another odd, even schizophrenic, aspect to this movie. Clearly, the Georgian tourist ministry – fearful that two hours of watching the country being reduced to rubble might discourage potential holidaymakers – has insisted on the inclusion of lots of idyllic ‘travelogue’ imagery showing off the region’s beautiful old towns and balmy countryside. In some scenes, you half-expect Judith Chalmers to wander into shot and start extolling the virtues of the unspoilt beaches.

But then the action will suddenly lurch back to a graphic depiction of war-time horror (a wedding celebration ending in a bombed bloodbath, for example). Back and forth it goes, between sunny vistas and blasted buildings, cute pavement cafes and corpse-littered streets. It’s like watching Machete Kills and Wish You Were Here having noisy, confused sex. And not in a good way.

Misfortune seems to be heaped onto this movie. Already staggering under the weight of Georgian governmental expectation, its credibility is further lumbered by two titanically over-the-top performances from a couple of has-been stars: Andy Garcia and Val Kilmer (of which, more later). And then there’s the ultimate death-knell for any film: Renny Harlin.

Ah, Renny. Over the years, the scarecrow-coiffured Finn – a favourite bete noire of this website – has been accused of many things, but subtlety and sophistication are not among them.

The dead hand behind such clunking high-concept fare as Die Hard 2, Deep Blue Sea and Cliffhanger, our Renny deals pretty much exclusively in explosions, car chases and gunfights. Indeed, his Nordic disposition seems almost offended by such quaint cinematic conventions as plot and character development.

Harlin’s stylistic peccadilloes are most readily apparent here during a scene in which senior government figures anxiously discuss the country’s fate. Confronted with people doing nothing more than actually speaking to each other, Harlin’s unease is palpable. You can almost sense his panic: ‘What is this? Two people, in a room, talking? Oh my god – there’s pages of this stuff’.

Realising the potential for cinematic catastrophe (ie. three straight minutes without an explosion) Renny solves the problem with admirable simplicity: he just presses the directorial fast-forward button. Suddenly the actors – who’d previously been speaking in measured and actorly tones – start rattling through their dialogue at machine-gun pace. It’s like they’re taking on bets at Ascot.

Complex plot points – whole swathes of story – are hurled back and forth like hand-grenades, just so the Renny-nator can get back to blowing some shit up.

Still, such pyromaniacal intent was always going to pay dividends for readers of this blog. And when a big Russkie Mil-Hind 24 hooves into view, shooting up heroic Georgian soldiers, you can be sure Renny isn’t about to cut away to a quiet scene of contemplative dialogue. Oh, no. It’s chopper fire-ball time.

With his comrades under fire, one of the Georgian grunts whips out a rocket launcher and blasts the helicopter. Damaged, the whirlybird spins into the top of a building, before tumbling to the ground and providing our exploding helicopter ‘money shot’.

As already mentioned, if there’s one thing old Renny knows about (and we’ve checked: there is only ‘one thing’ he does know about) it’s how to blow things up. Thus, the audience gets to really relish the ailing chopper’s death throes before seeing its final demise – all in lustrous, fiery, CGI.

Nothing to report, sadly. This is a little disappointing, as the Nordic numpty has provided plenty of quirky helicopter explosions in previous films – see Cliffhanger, Deep Blue Sea, or 12 Rounds for examples.

For schadenfreude enthusiasts, the undoubted highlights of the film are the eccentric cameos from Andy Garcia and Val Kilmer.

Garcia has the juicier role as Georgian President Mikheil Saakashvili. Cast because of his physical resemblance to the great man (and, let’s be frank, because he’s generally ‘available’ these days), his performance comes crashing to the ground as soon he opens his mouth.

Try as he might, our perma-brylcreemed smoothie is simply unable to maintain a Russian growl, and his weird Cuban lilt keeps leaking through. No true film buff has really lived till they’ve witnessed his ‘Nyet! Nyet! What-a are ya doin-a, senor comgrim rade?’ schtick for themselves.

Along with Dick Van Dyke in Mary Poppins and Ray Winstone’s catastrophic ‘American’ in Fool’s Gold, this is one of the worst accents committed to film.

Val Kilmer has a smaller role as a maverick, slightly unhinged journalist: though, in fairness, his role is the only thing about him that is small. The striking, blonde hunk of Top Gun has long since been subsumed into layers of celebrity blubber. Big Val’s famously hearty appetite for drink, drugs and however many burgers are on offer is, in a sense, now literally written all over him in rubbery bands of flesh.

His entrance to the film is spectacular. With little warning, the shocked viewer is confronted with a paunchy, long-haired Val, luxuriating naked in a bubble bath. It’s like Jabba the Hutt’s bigger brother has slithered into the wrong film. It’s a truly magnificent sight.

In his (successful) day, Val was famous for on-set strops, minion-bullying and ridiculous ‘remove all the red M&Ms’-style diva behaviour, so there’s a certain grim satisfaction in watching the old fool get his gut out for a few paltry shekls. It can comfortably be assumed that the Big Man is these days administering to his own M&M compartmentalisation needs.

The movie spends 15 minutes establishing a traumatic back-story for Anders, involving a friend and fellow reporter dying in his arms while in Iraq. Throughout the film, various characters tell Anders he needs to move on from this trauma in a manner that strongly suggests a looming moment of dramatic catharsis. However, nothing ever happens.

One can only guess that Harlin, petrified by the prospect of shooting scenes featuring actual emotions, quietly ripped those pages out of everyone’s script.

“Everything is easy when you wear a mini-skirt.” Thankfully, this line is not uttered by Val Kilmer.

Review by: Jafo
Posted by Exploding Helicopter at 13:44