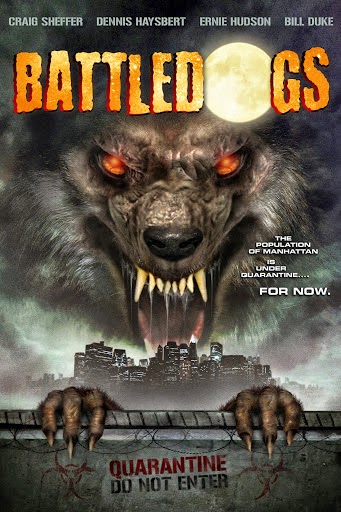 …or World War Werewolf, as this film - for very important legal reasons – is assiduously not called.

That’s because Battledogs (2013) is a ‘mockbuster’, one of those not-so-thinly veiled (but just veiled enough) rip-offs of a mega-budget blockbuster.

So, after zombie extravaganza World War Z staggered into cinemas in the summer of 2013, those masters of the cheap knock-off at The Asylum quickly bashed out Battledogs.

The basic plot of the two films is uncannily similar, with both featuring a world imperilled by a mystery virus that turns people into murderous savages. But to ensure there’s no payday for the copyright lawyers, Battledogs cheekily swaps World War Z’s human-chewing zombies for werewolves. A sort of werewolf in zombie clothing, if you will.

So while World War Z saw A-list Hollywood hunk Brad Pitt literally scour the world (and bizarrely Wales) looking for a zombie cure, the made-for-cable Battledogs has acting no-mark Craig Sheffer (who he?) skulking round the inside of a few deserted buildings. Jerusalem, Korea and packed USA city centres are notable by their absence.

The low grade vibe also extends to the supporting cast, a random assortment of semi-familiar faces who are clearly as bored by the film as the viewer. A near-comatose Bill Duke (Predator, Commando) briefly appears as the President of the United States. All good leaders should display a quiet stoicism, but this performance borders on catatonic depression.

Elsewhere, Ernie Hudson (Ghostbusters) can barely contain the sense of ennui as he ticks off the minutes before his character is gnawed to death. And Ariana Richards (who you’ll dimly remember as the teenage girl terrorised by dinosaurs in Jurassic Park) offers a stark reminder of why it’s been six years since she last appeared in TV or film.

Alone among the cast, Dennis Haysbert (24, Heat) valiantly tries to add a touch of class. Fighting against the ropey dialogue, he delivers his lines with all the pained seriousness of a Shakespearean soliloquy, but the poor lad shouldn’t have bothered. This film is Much Ado About Nothing.

Battledogs is like the suspiciously cheap Gucci bag you bought on holiday, which fell apart the moment the plane landed back home. You knew all along it was a cheap knock-off that would quickly disappoint, but went ahead anyway on the off-chance it might actually pass for the real thing. You really should have known better.

Luckily for this blog, the one authentic pleasure in this film is the helicopter explosion. It occurs when the military are sent in to ‘reclaim the streets’ of New York from the fuzzy (and not at all zombie-like, lawyers!) fiends. A squadron of helicopter gunships flies in to pursue the rampaging werewolves down the streets.

As one whirlybird hovers next to a skyscraper, a werewolf suddenly smashes through one of the building’s upper windows and straight at it. Stunned by the assault, the pilot loses control of the chopper and crashes into the side of the building. Ba-doom!

The werewolf’s daring assault on the helicopter is filmed in slow motion so we can fully enjoy the improbability of what we’re witnessing. Gloriously, the pilot gets to perform an obligatory “What the...” line, before losing control of his chopper and crashing it.

The classic “What the…” exclamation in films is an interesting phenomena. No matter what the scenario, any expendable extra will always have just enough time to utter those fabled two words, yet never sufficient time to actually complete their sentence.

Deep down, all of us must surely long to meet our maker in a similarly poetic way.

Sometimes, all you can do is laugh. Hopeless as the stuff of nightmares, the crap werewolves are capable of raising the odd titter.

As the film’s hero, Craig Sheffer is blandly anonymous. Cutting it neither as an action figure nor a top boffin, he has zero screen presence. In his scenes with the Atari-style CGI werewolves, you start to admire their method.

A better actor (and it’s hard at this point to think of a worse one) could perhaps have built an interesting conflict with Dennis Haysbert, the only decent actor in the movie.

This isn’t the first time Sheffer has come up against werewolves. In the late Eighties, he was involved in a cartoon series spin-off from Teen Wolf.

Review by: Jafo
Posted by Exploding Helicopter at 19:10