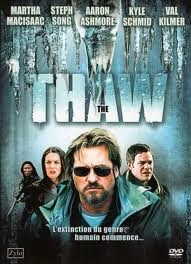 It’s ironic that, having made his name playing Iceman in Top Gun, Hollywood quickly went very cold on Val Kilmer.

First there was the frosty reception for his lumpen turn in Batman Forever. And when his lame reboot of 60s spy caper The Saint met with an equally chilly response, Tinseltown promptly shoved Kilmer’s career into the deep freeze and forgot about him.

Since then, Val’s attempts to once more bask in the warm glow of cinematic success have resulted only in lukewarm DTV slush. So, could this low budget chiller be the one to finally bring Val Kilmer in from the cold? In a word: no.

The Thaw (2009) sees Kilmer play Dr Kruipen, a scientist investigating the global warming crisis. While working in the Arctic, he’s made a momentous discovery with global implications. So naturally, this being a schlock-horror movie, the first thing he does – before calling the World Health Organisation or the UN – is invite four nubile teen students along to, like, check it out.

And then, after a few early scenes, he pulls a Yeti-like vanishing trick and simply disappears for most of the film. At first you hardly notice. But after a while, as you stifle yet another yawn at the panto-horror antics of the teen-bots, you’ll start questioning whether you really saw Val Kilmer at all.

Was he even in this movie? Have you perhaps confused this with another movie? After all, the only evidence for his existence lies in a few brief, blurred sightings, uncertain third-hand accounts and opening credits that state ‘Starring Val Kilmer’. It’s all a mystery. Truly, Big Val has become the Abominable Actor of Hollywood.

But what is the chilling terror that our young clichés are pitted against? The answer, dear reader, is flesh-eating bugs.

Our weirdo doctor has discovered an ancient, deadly parasite while defrosting the remains of a prehistoric woolly mammoth. And once thawed, these pesky critters like nothing more than burrowing under human skin, where they quickly multiply and start feasting on the flesh.

And, horror of horrors, it turns out the doc isn’t quite as nice as he doesn’t seem. Oh, no. Our boffin’s view of humanity has soured after being ignored for years (perhaps this is where Kilmer identified with the role).

His dastardly plan is to deliberately infect the naïve teens and send them back to civilisation, thus unleashing the buggy threat on the world. Although given the sex-ploits of the teens, venereal disease might well kill everyone off long before the bugs get a chance to.

As a way of getting the world’s population to listen to his message about melting ice-caps, it’s unconventional to say the least. Let’s just hope Al Gore doesn’t catch on to this one.

Matters come to a head in the final act, when Big Val finally wanders in from the snow to find his cunning plan has been rumbled.

Not to be foiled, he infects himself with the dangerous parasite and hops into a helicopter to fly back and infect the world. With all the other teens rendered into bug-food, it falls to the frigid nerd (typically the last surviving genre type in cheesy horror films) to stop the deranged doctor.

Grabbing a rifle, she fires inexpertly at the helicopter and ‘luckily’ hits the pilot in the neck, killing him. The chopper spirals out of control and whirlybirds into the Arctic base station. Boom! Both building and helicopter blow up in a massive fireball. Someone get the marshmallows.

Given this is a low budget film with few frills – or thrills, for that matter – this is a commendable chopper fireball. Having the helicopter crash into the building gives the pyrotechnics boys and girls a perfect excuse to create an impressively large fireball.

Little to report, sadly. Helicopters have been destroyed in similar circumstances countless times before. Perhaps surprisingly, even the polar location of the explosion is fairly common. For previous examples see: John Carpenter’s The Thing (and its remake), TV disaster movie 2012: Ice Age, and the lamentable creature-feature Arctic Predator.

A gory, improvised, amputation has long been a staple of the horror film, and dismemberment fans will are in for a treat with The Thaw.

After being bitten on the arm, one hapless teen agree to have their arm unceremoniously chopped off to stop the infection spreading. Fortunately, there’s a big meat cleaver handy.

Unfortunately, the wimpy teen wielding it is afraid of blood. They initially bungle the amputation necessitating repeated, gruesome, blows to finally sever the limb. Given a choice, they should probably have left his arm to the bugs. They’d have made a cleaner job.

Talking of plot standbys, where would these films be without the scene where one character realises they’ve left something crucial behind? Sure enough, this hoary old plot device here is creaked into dishonourable service once again here.

After trapping the parasites in a laboratory, the gang realise they’ve left vital evidence of the conspiracy in the room. Cue a predictably frantic escapade into the room to retrieve said device.

The somewhat meaningless: “Extinction will find you.”

William B Davis, better known as the ‘smoking man’ from The X-Files, briefly pops up as a talking head in a TV clip.

The truth is out there, but the entertainment certainly isn’t in here.

Posted by Exploding Helicopter at 18:06