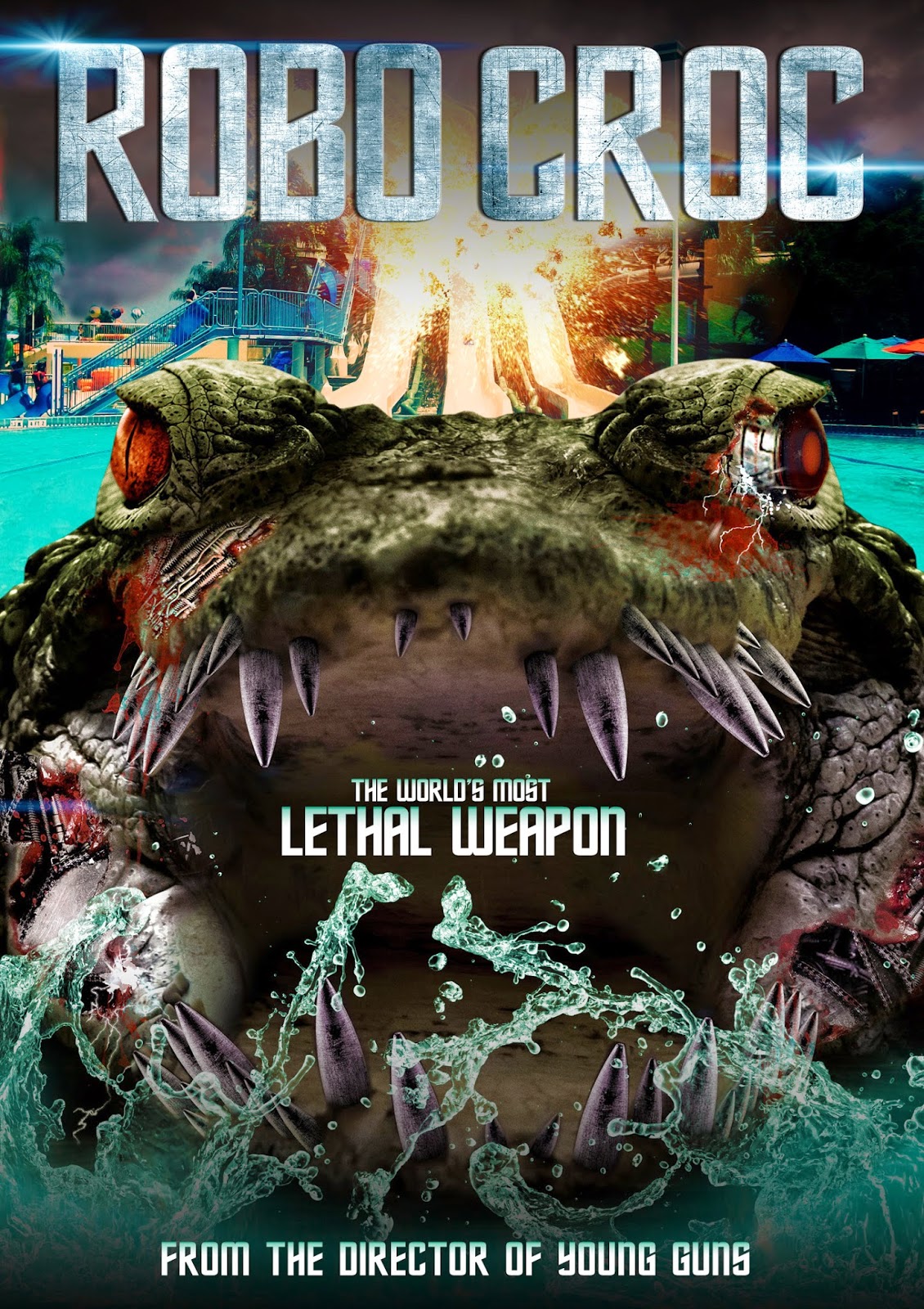 Sometimes the title spells out exactly what you’re going to get.

101 Dalmatians gave us spotted dogs, and lots of them. Three Men and a Baby gave us, well, three men and a baby. And certainly, as far as Exploding Helicopter was concerned, Nude Nuns With Big Guns delivered on every aspect of its promise.

So, when a military rocket containing top secret nanotechnology crash lands in a zoo, we’re just one implausible plot twist away from the creation of a homicidal, robotic crocodile. Namely, Robocroc (2013)

What follows is, broadly speaking, about as imaginative as the title. The newly spawned cyber reptile quickly goes on the rampage, chewing up hapless extras and chomping an army unit into mincemeat.

It then falls to two zookeepers to save the world from this pointy-toothed terror. But for all their best efforts, the hapless duo is powerless to save the audience from the crushing boredom of the plot.

Given this is a low budget creature feature, Exploding Helicopter always expected Robocroc to be a cheap and shoddy affair. However, even for a hardened viewer of genre cliche, this was a whole new order of bad.

The whole film is beset by a depressing lethargy. In scene after endless scene, it half-heartedly trudges through the usual genre tropes with all the enthusiasm of a sulky teenager press-ganged into a family holiday.

Worse, in a film about a murderous 20 foot-long crocodile, all the truly terrifying butchery appears to have taken place in the editing suite. Clearly embarrassed by the shonky CGI appearance of its notional star - presumably generated on a ZX Spectrum - the movie-makers limit Robocroc's appearance to just a few fleeting glimpses.

Which leaves a terrible monster movie without even the virtue of a monster. Several promising scenes - for example, the death of a swimming pool filled with nubile teens - are rendered utterly toothless, as all the limb-tearing carnage takes place off-screen. When a splatter movie refuses to show either the villain or the victims, you have to wonder what the point is.

(In fairness, Jaws was famously 'the shark movie without a shark' for the first two acts. But it had a cracking script, visionary director, top acting chops and an unforgettable score to take up the slack. Here it looks like the cameraman's got pissed and fallen into the camera at the vital moment.)

The cumulative effect of all this inaction soon becomes mind-numbing. For long stretches nothing happens. Then finally, something does happen, but it's all off-screen. Then nothing happens again. Few creature-features can lay claim to having a Beckettian quality, but this is such a film. It should have been called Waiting for Robocroc.

Still few films are without any reward and Robocroc does at least serve up one unlikely treat: Keith from Boyzone. Oh, yes. Cast as a Steve Irwin-style croc hunter, the former chart topping lip-syncer is called in to help stop the beast. (If only he'd crooned out a couple of his lamentable ballads at the monster, the movie might well have been over a lot sooner.)

After watching Robocroc turn a bunch of heavily armed elite soldiers into hamburger, the Irish lunk bizarrely decides to get all Tarzan on the techno-reptile's ass and wrestle it into submission like Johnny Weissmuller did all those years ago.

(In perhaps a movie first, the CGI wrestling on display here is actually less convincing than Weissmuller's famously histrionic thrashings about with a large piece of reptile-shaped rubber.)

Sadly, such giddy novelty is in scarce supply elsewhere - and particularly with the exploding helicopter scene.

Following a possible sighting, the military predictably bring in a helicopter to search for the murderous croc by swooping very, very low over the water. You'll never guess what happens next. Oh, you already have.

Yup, registering 9.9 on the cliche-ometer, our dependable monster leaps 'suddenly' from the water and smashes into the whirlybird, causing it to explode. Call it a chopper croc-flagration.

Dismal. The helicopter explosion is only briefly glimpsed. Presumably the special effects budget couldn’t stretch to showing anything more.

Better. This is the first known destruction of a helicopter by a robotic crocodile.

It was a struggle to find any, but the least-worst aspect of the point of view photography which allows us to see the world through Robocroc's eyes. This means we get Robocop or Terminator style computer graphics overlaid on the real world with flashing “target locked” messages popping up onscreen. Conveniently, it also means the director doesn't have to show us the dreadful computer croc.

We're pretty much stuck for choice here, but perhaps the most galling thing is that there never seems to be enough of anything.

The military don’t have enough soldiers, the zoo doesn't have enough animals, the splatter scenes don't have nearly enough splatter. However, what's really missing is drama, tension and entertainment.

Dee Wallace (who you may remember from E.T: the Extra Terrestrial) faced a similar threat in the equally low budget Alligator 2: The Mutation.

Review by: Jafo
Posted by Exploding Helicopter at 21:04