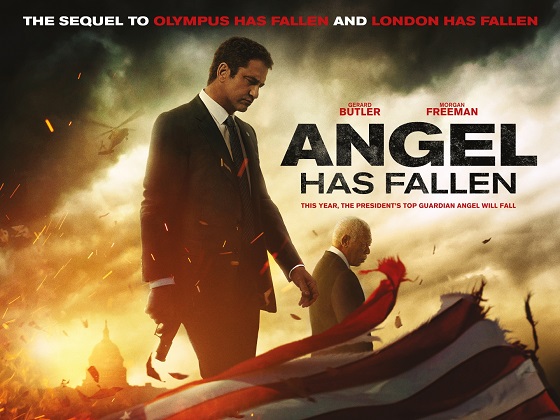 Admit it: you were expecting something more like ‘Standards Have Fallen’.

After the grim uber-violence of Olympus Has Fallen, and the queasy xenophobia of London Has Fallen, it’s fair to say hopes weren’t high for instalment three in Gerard Butler’s presidential protection franchise.

The film looked for all the world like a last desperate cash-grab before the series was consigned to the scrapheap (or even worse, the dingy netherworld of DTV sequels). This impression was only heightened by news of a slimmed down budget and scaled down cast (series stalwarts Angela Bassett, Aaron Eckhart, and Melissa Leo are all notably absent).

So, imagine Exploding Helicopter’s surprise when Angel Has Fallen (2019) turned out to be a rollickingly good action romp.

How on earth did that happen? And please can we have some more?

Gerard Butler once again finds himself in the centre of bullet-strewn bedlam after an assassination attempt on the President. After waking in a hospital, Jowly Gerry quickly learns that his entire team is dead, POTUS is in a coma, and he’s the FBI’s chief suspect in the attempted hit. Zoiks!

Naturally, it’s not long before Big Gez escapes and goes on the run in an effort to clear his name. Along the way, he must work out who’s masterminding the conspiracy, avoid the mercenaries hunting him down and reconnect with his estranged father. All while trying to decide if he wants to take a desk job at work. Apparently, the dental package is very attractive...

You’d be forgiven for thinking all this makes Angel Has Fallen sound remarkably like its knuckleheaded predecessors. But watching the film, it becomes clear there’s been a deliberate tonal reset.

While the grisly violence of past entries remains intact, the unpleasant strand of quasi-racism – “Why don’t you go back to Fuckheadistan?” bellows Butler in the London entry – has been quietly expunged from the formula. (Viewers wanting to see that unsavoury combination should instead check out Stallone’s thoroughly nasty Rambo: Last Blood.)

In addition, the stakes for our hero are made more personal. Not only must Gezza prove his innocence and defend his family, he’s also thrown together with his absentee father (Nick Nolte) – a PTSD-addled Vietnam veteran who’s now living off-grid like a crazed doomsday prepper. Or, as Butler observes: “One step down from the Unabomber.”

This move allows the film to make some surprisingly thoughtful nods towards the mental toll taken by a life of violence. There’s even an emotional reunion between these two grizzled warriors as they weigh the personal cost of the sacrifices they’ve made for their country.

Admittedly, the pair then seal their reconciliation by bloodily butchering a team of military contractors who’ve been sent to kill them. But hey, this is a ‘Has Fallen’ film, not a Bergman-esque reckoning of the human condition.

So, while Exploding Helicopter can enjoy having a little fun at Angel Has Fallen’s expense, the film absolutely succeeds on its own terms. You get muscular set pieces, a well-rounded story and meaningful character beats. What more could you ask for? To which the obvious answer is….

….an exploding helicopter. Or, in this case, four. The first occurs during the attempted coup d’etat. While relaxing on a fishing trip, the president and his protection team are attacked by a flock(?) of exploding drones. (Answers on a postcard as to what the collective noun for these murderous machines should be.)

Packed with explosives, the miniature aircraft dive straight at their targets like robotic kamikaze pilots. They wipe out a few Secret Service agents and then smash into the presidential helicopter, Marine One, and two accompanying Osprey V-22, blowing them up.

But wait: that’s not all.

At the end of the film Danny Huston - the scenery-chomping villain of the piece - tries to make his getaway in a helicopter that’s about to lift-off. But before he can make his escape, Butler detonates the whirlybird using the grenade launcher under his machine gun. Perhaps they should have called this one Aircraft Has Fallen.

We give top marks to the chopper fireball staged at the end of the film as part of the film’s big finale. Its burning carcass acts as a haunting backdrop for the climatic mano-a-mano knife fight between Huston and Butler.

Sadly, the earlier scene is a bit of a disappointment. While it’s hard to fault the scene overall, the chopper fireballs are a little blink-and-you’ll-miss-them.

Together with Independence Day and The Sentinel, Angel Has Fallen can be added to a small but perfectly formed group of films that boast the fiery destruction of a presidential helicopter. Impressively, the film also features the first use of a drone to blow up a chopper.

Readers with long memories may have noticed that Angel Has Fallen’s story bares no relation to the one trailed in much of the advance publicity. That’s because it was originally meant to feature terrorists hijacking Air Force One.

But with Butler unhappy with the script, veteran screenwriter Robert Mark Kamen (Taken, The Transporter) was called in to fix things. And ultimately, this ‘repair job’ involved junking the entire thing and coming up with a completely new story.

Only one problem remained: how to explain the title they were now stuck with? Cue a newscaster on the Exposition News Network droning the improbable line: “Tonight, the President’s guardian angel has fallen…”

Why not check out our review of Angel Has Fallen on the Exploding Helicopter podcast. Listen on iTunes, Acast, Stitcher, Spotify and wherever you get your podcasts.

Posted by Exploding Helicopter at 11:51