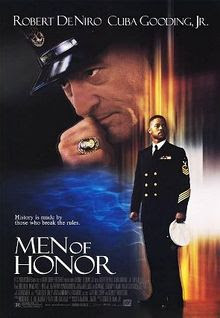 Cuba Gooding Jr. overcomes racism and disability to become the first black Navy diver in this inspirational or, depending on your level of cynicism, nauseatingly saccharin biopic.

Mercifully, amid all the heart string tugging and treacly homilies to the human spirit there's an exploding helicopter to pep up proceedings.

In an early scene, Gooding is aboard ship when a delivery of mail arrives by helicopter. We see the chopper lower a mail sack to the ship via a winch. Gooding goes below deck, but just as he does we suddenly hear a loud crash.

Gooding hurries topside to find helicopter wreckage scattered across the ocean. Some unseen event has conspired to cause the copter to crash.

This is one of worst exploding helicopter sequences ever committed to film, and director George Tillman Jr should be prosecuted for crimes against chopper fireballs.

Despite having the perfect opportunity to stage a dramatic chopper fireball, Tillman opts to stage the explosion off-screen.

It's a technique that some directors have cleverly used to increase the power of a scene. However, Tillman is deluded if he thinks he has added any extra drama here. It is an appalling misjudgement.

Confronted with the challenge of staging a helicopter explosion, Tillman has bottled it. Such cinematic cowardice raises serious questions as to whether he should ever be allowed to direct another film.

As this film is based on true events, the helicopter’s presence is presumably historically accurate.

Rather than complicate his shooting schedule, Tillman allows the explosion to happen off-screen. Pathetic.

The only positive is that an otherwise utterly unpromising film about Navy divers delivers a briefly interesting moment for exploding helicopter fanatics.

The first rule of exploding helicopters is show the helicopter exploding.

Still want more? Then check out the Exploding Helicopter podcast episode on Men Of Honor. Listen to the show on iTunes, Podomatic, Stitcher, YourListen or Acast.

Posted by Exploding Helicopter at 12:21