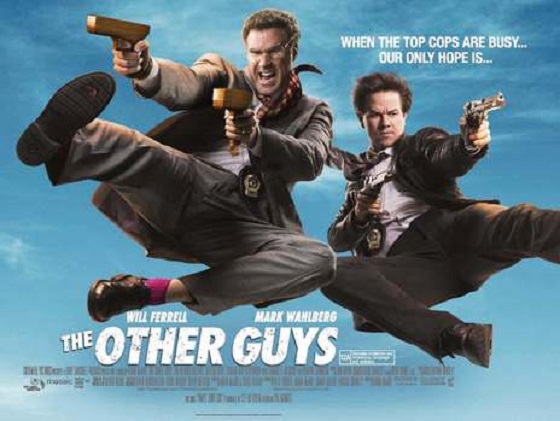 Gamble (William Ferrell) and Hoitz (Mark Wahlberg) are two desk bound cops who seem doomed to a career of pencil pushing and office mockery. Or at least until they get caught up in the investigation of an elaborate Ponzi scheme.

The financial chicanery has been perpetrated by David Ershon (Steve Coogan), a slimy banker whose tentacles seem to stretch into the most unexpected of places.


Co-written by Adam McKay, this got middling reviews from critics, but found much more favour with audiences.

In the course of their investigation, our heroes are driving along in a car when they find themselves pursued by villains in a helicopter. Under heavy fire from a machinegun wielding henchmen on the chopper, Wahlberg and Ferrell try to evade the villains by seeking cover in a golf driving range. The helicopter is then pelted by golf balls and the pilot loses control and tailspins into a nearby bridge.
Artistic merit
For a few seconds the viewer might think that the helicopter might just make it out unscathed. However it slowly spirals and as metal grinds into concrete we get the pay-off as the whirlybird bursts into a frame-filling fireball.
Relevance to Plot


Pretty tenuous. There seems to be a shadowy organization that is backing Coogan’s financial impropriety but would they be able to fly helicopter gunship around a post 9-11 New York City without any comeback? This is a comedy so we will let them off.

A cinematic helicopter explosive first! Death by Titleist. Who thought they'd ever get to see a helicopter destroyed by golf balls?
In a mature niche genre it is nice to know that filmmakers are still taking the time to think of new ways to kill a helicopter. Where else are you going to see a helicopter being taken out by a 3 wood?
Review by: Neon Messiah
Posted by Exploding Helicopter at 12:18

Email ThisBlogThis!Share to TwitterShare to FacebookShare to Pinterest
Labels: Mark Wahlberg, Review by: Neon Messiah, The Other Guys