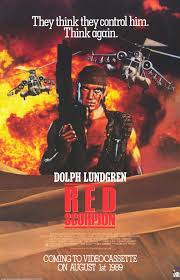 
Lundgren is tasked with killing the rebel leader, Sundata. However, upon witnessing the brutality of the pro-Soviet forces, Dolph decides to fight with the rebels and help their rebellion succeed.


The film opens with some dark, backlit, photographs of Dolph looking mean and moody, while a narrator tells us what a bad-ass the Big Swede is. We then cut to the Russian army HQ in Moscow where Dolph is brought into a room of top Generals for an incredibly long and dull scene of exposition.

In order to carry out his orders, Dolph has to find a way to get close enough to the rebel leader to assassinate him. He arranges for himself to be put in jail with Kallunda (Al White) the right hand man of the rebel leader who the Soviet forces have captured.

Review by: Jafo
Posted by Exploding Helicopter at 12:45