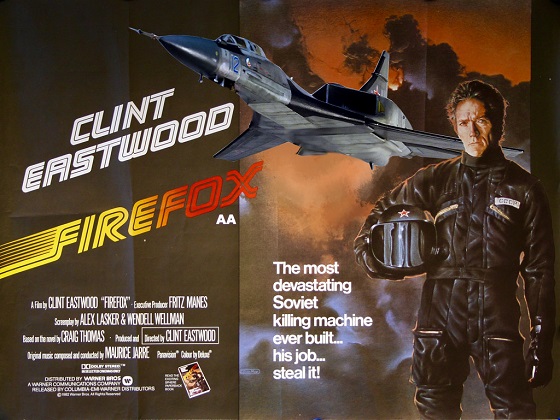 Clint Eastwood plays a top fighter pilot, called out of retirement to steal an experimental Russian plane - the Firefox.
In order to sneak into the Soviet Union, Clint disguises himself as a lingerie salesman. So convincing is Eastwood as a purveyor of ladies smalls, he sails through the Russkies border controls.
Later, he infiltrates the airbase - though sadly not disguised as a lingerie salesman - and steals the fighter. Eastwood then flies the plane out of Soviet airspace - whilst avoiding the Russian airforce and the might of its air defences.

The film climaxes with Old Squint engaged in a dogfight with the only other Firefox fighter - flown by the Soviet's top pilot.

Whilst making his airborne escape, Eastwood has to get past a Soviet naval destroyer which has scrambled two helicopters to destroy the Firefox.

Using the futuristic fighter jet's thought controlled weapons systems Eastwood growls in Russian to deploy a couple of rockets to take out the choppers. The first is a crisp, quick, frontal detonation.

Eastwood, also the film’s director, allows the action to linger a little longer on the second helicopter. This one has just taken off the deck of the ship when its blown-up. It crashes back into the deck of the ship and is consumed by flames. The rotor blades continue to turn in time honoured exploding helicopter fashion.

The whole sequence is handled in a rather depressingly brusque way. The helicopters are destroyed in a perfunctory manner as if they were small flies being simply swatted away.

Given that Firefox is centred around a revolutionary fighter plane, Eastwood probably felt that it would undermine the aim of the film to portray the helicopters in a more commanding manner.

Viewers are left in no doubt about the helicopters inferior position in the air force hierarchy.

Frankly disappointing. Clint doesn’t let the action dwell for long on the exploding helicopters. There’s little imagination in the method or style of destruction.

However, Clint brings his own ineffable cool to the scene by blowing up both helicopters by muttering taciturnly in Russian. Very stylish.

First known destruction of a helicopter with a thought controlled weapons system.

The helicopter explosions liven up a film which has otherwise chosen foolishly to base its plot on a fighter plane.

The helicopters are displayed as inept opponents in the face of the Firefox’s aerial supremacy.
Best line
"Think in Russian."

Review by: Jafo
Posted by Exploding Helicopter at 20:32