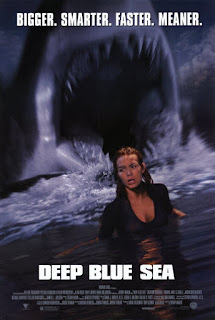 So trumpeted the poster for this Jaws-on-acid yarn, thus raising the audience’s expectations before they’d even entered the cinema. Fortunately, the poster also proclaimed ‘Directed by Renny Harlin’, which brought expectations right down again.

There are so many reasons why this film shouldn’t work. First, it’s a crap idea: mutant brainy sharks swimming amok in a flooded oceanic research centre. Then there’s the cavalcade of rubbish actors, including poor-man’s-Stallone Thomas Jane and the reliably awful Saffron Burrows. Adding to the stink is the inevitable rapper-trying-his-hand-at-acting turn, this time courtesy of portly playa LL Cool J.

Anything else? Yup, the CGI is appalling in places. The basic premise, that a bunch of brainy sharks are deliberately trying to sink the research facility so they can jump to freedom at the surface, is nothing short of risible. (Presumably they sat down first and studied the design plans.) And, of course, holding the whole creaking mass together is the hapless Harlin.

It should be a disaster. So why do I like it so much? The answer, I believe, is that it is earnestly bad. There have been a lot of ‘ironically’ bad movies in recent years (I’m looking at you, Snakes on a Plane), which have given self-reverential nods to their own shitness while actually being shit. Which is just…well, shit.

This movie isn’t one of them. The script has a ripe terribleness that couldn’t be faked, Harlin’s lumpen direction really is THAT BAD, and the same goes for the actors. As ever, Jane is deadly earnest in the ongoing struggle to scowl and say his words in the right order. Burrows also plays it straight, though unquestionably she’s the funniest thing in the whole movie. When I saw this at the cinema, the audience howled at almost her every line.

Only Samuel L Jackson seems to have realised that he’s mired in premium cinematic fromage, and has the chops to act accordingly. He gives an entertainingly hammy performance that always seems to be tipping a sly wink to the audience. 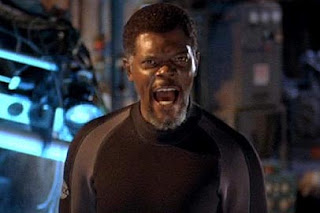 But, before all the submarine carnage can happen, the research facility first has to start sinking. Cue a CGI helicopter approaching the CGI facility during a furious CGI storm. The chopper pilots lower a winch to collect a stretchered casualty who’s suddenly an arm short, thanks to the sharks. As he dangles a few feet above the swirling waves, the winch suddenly breaks for absolutely no reason whatsoever and sends the poor sod back into the briny.

The winch cable is then pulled sharply from underwater by an invisible shark, which drags the chopper into the station’s control tower. Ba-doom.

Non-existent. The whole episode is merely a CGI-heavy plot device to get the facility sunk. Hilariously, when the chopper hits the tower, a long shot shows huge fake explosions ripping apart whole sections of the structure, regardless of their vicinity to the crash site. Remember, this is an ocean-borne facility during a fierce rainstorm, being hit by a single helicopter gas-tank. They’re essentially using a match to blow up a swimming pool.

Do you mean the two extras in helmets who are on-screen for three seconds saying: ‘The winch is stuck.’? No, I don’t think they do but, on the whole, I’ve been surprisingly sanguine about it.

What follows immediately after the helicopter explosion is so majestically bad it borders on genius. The submerged cast are stood before a giant glass screen separating them from hundreds of tonnes of ocean. Suddenly, a big shark approaches fast with the be-stretchered casualty between its jaws and flings the unlucky patient at them.

As huge cracks start to appear across the glass promising immediate death, the cast – instead of running – stand there gawking at it for a full 58 seconds (yes, I counted). When it finally shatters, Samuel is standing less than ten metres away. But he still manages to outrun the ocean. Sublime.

Even someone as dopey as Harlin realised 90 minutes of Burrows droning on about science in a white coat (“membrane integrity’s improving”) would be more than the movie’s teen-male demographic could bear. Much like hungry mutant sharks, they would be baying for cleavage.

That’s why, when cornered by a giant shark, Burrows does the obvious thing and rips off her diving suit. Breasts heaving with far more conviction than any facial expression she can muster, our Saffron stands on her insulated rubber suit then uses an electrical cable to fry the watery fiend.

Result: Baps, 2: Shark, 0. And the worst filmed excuse to get an actress’ nellies out ever committed to celluloid.

“Tell me I did not just see that.” I know exactly what you mean, Samuel…

Some of these people actually managed to get work again.

Want more? Of course you do. So why not listen to Exploding Helicopter discuss Deep Blue Sea on our podcast. You can find us on iTunes, Stitcher, YourListen and Podomatic.

Posted by Exploding Helicopter at 14:28