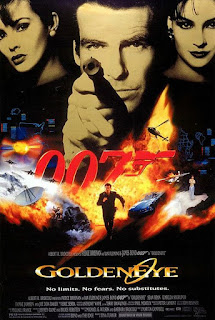 Bullets and surface-to-air missiles are apparently far too mundane for Bond screenplay writers and GoldenEye doesn’t disappoint, with yet another unique combusting chopper. (Oo-er. If Roger Moore were writing this piece, that would be worthy of a cheap double-entendre.)

GoldenEye re-invigorated a franchise that had become stagnant during a six-year legal dispute over licensing rights. During this period, Timothy Dalton quit as Bond having been harshly deemed a failure – mainly due to the poor commercial performance of License To Kill.

Although his first Bond film, Goldeneye also represented the zenith of Pierce Brosnan’s stint as 007 – which soon descended into self-indulgent tripe, culminating in the risible Die Another Day. This movie managed to convey was a tense climate of post-Cold War espionage, with redundant or retired spies using their skills in other pursuits.

But enough cerebral chit-chat. GoldenEye is just a bloody cool film. The opening scene, with a sort of metallic Eastern Bloc soundtrack, was electrifying and quintessential Bond: bungee jumping off an enormous dam into a Russian chemical weapons base, before meeting up with 006 (Sean Bean as Alec Trevelyan) and wiring the place to explode.

During the mission, and throughout the film in fact, there is unintended light relief in the form of Sean Bean’s posh accent. Posh, that is, if you’re from East Yorkshire and Bean is from Harrogate. Just before his faux execution, Bean shouts at Bond: “Do it fer Englund, James. Blow ‘em all t’hell!” If he’d added: “Ecky thump” at the end, you could have sworn you were watching a lively episode of Last of the Summer Wine.

The high-point of the film though, is Robbie Coltrane’s scene-stealing turn as Valentin Zukovsky. It’s easy to imagine Coltrane licking his lips while reading the script for his part as an ex-KGB agent turned arms dealer and gangster.

His lines are delivered with a charisma and venom that make him utterly convincing as a ruthless Russian crime boss, still bitterly nursing a permanent limp after Bond shot him in the leg years ago.

His first scene with Bond has a fantastic exchange that’s worth repeating. After Bond asks for a favour, Zukovsky says: “You want ME to do YOU a favour?” (Ironic Brian Blessed style bellow, then a pause).  “My knee ACHES every day. Twice as bad when it is cold. Tell him how long the winter lasts in this country, Dmitri.”
[Weedy voice of Dmitri off screen[: “Well, it depends on…”
Zukovsky: “SILENCE!!!” 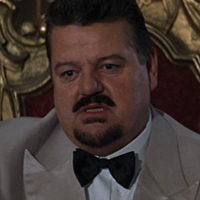 Coltrane, however, only narrowly pips some other inspired pieces of casting in the effort to refresh the Bond brand: Judi Dench brilliantly portraying M; Samantha Bond as a sassy, modern day Miss Moneypenny; and Famke Janssen as sadomasochist assassin, Xenia Onatopp.

Janssen’s Bond girl, in particular, was a brave move. The sadomasochistic elements, including tight leather outfits and crushing a man to death mid-coitus, are quite explicit for what people had come to expect of a Bond film. She even appears to orgasm while laying waste to some innocent civil servants with a machine gun. 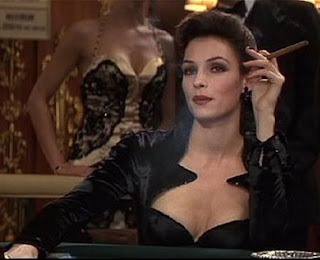 Back to the film though, and its back-to-basics plot. Bond and Alec Trevelyan (Bean’s 006) infiltrate a Russian chemical weapons plant with the intention of blowing it up. It all goes wrong when 006 is captured and seemingly executed by a cruel-looking Russian general.

Bond escapes in magnificent style, motorcycling down a mountain runway and skydiving without parachute into a plummeting Cessna, which he eventually brings under control and flies away as the plant explodes. Several years later, a plot unfurls in which the same renegade general steals a secret Russian space weapon on behalf of a sinister but unseen criminal mastermind, Janus.

This, it turns out, is Yorkshire’s finest secret agent, Alec Trevelyan, who is revealed as the son of Lienz Cossacks. (Who knew the Soviets had colonised Pontefract?). Anyway, via a series of glamorous locations, Bond ends up in Cuba with the attractive but fairly dull Izabella Scorupco - although she’s perhaps unfortunate to appear as a computer programmer in a 007 film where the other main Bond girl is a leather-clad, murdering, sex maniac. 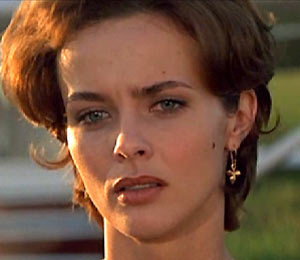 In the process of looking for Trevelyan’s base in the Cuban jungle, a chopper appears of out nowhere. A rope drops down, followed swiftly by randy vixen Onatopp, clearly in the mood for some more murder-sex.

As she squeezes the life out of Bond and screeches with desire, he manages to reattach her to the jump-rope and uses her gun to shoot at the hovering chopper. The panicking pilot loses control, and Onatopp is violently wrenched away only to become anchored to a tree.

She lets out a blood-curdling scream as the chopper vs. tree combination crushes her to death. She remains pinned to the tree, acting as a kind of human anchor for the ‘copter, which plummets to the ground and explodes in a massive fireball.

But we shouldn't forget another equally interesting helicopter explosion. Earlier in the film Bond and Natalya are captured and tied up inside a special stealth helicopter that's been booby-trapped.

Its missiles automatically fire and loop round to come straight back at the vehicle. Luckily, Bond manage to headbutt the ejector seat button and our heroes are shot out of the stationary whirlybird seconds before the missiles hit.

Quite strong. Some thought clearly went into these fireballs. If it were a steak, it would be a nice, meaty sirloin. Not quite a filet mignon, but a luxury cut nonetheless.

Much like our blog on The Spy Who Loved Me’s underwater car-to-chopper rocket and Tomorrow Never Dies’ rusty washing line, I can’t recall another chopper being brought down by being attached to a human anchor. Well done, James.

Also we have never before seen anyone escape from a helicopter via ejector seats. As you can imagine the presence of 20-foot long, whirling metal blades makes ejecting from a helicopter a tad problematic. But in this chopper the blades are first ejected before Bond and Natalya are thrust into the sky inside a self-contained pod from which parachutes eventually emerge.

If none of that sounds terribly plausible, please try and remember this is a Bond film so why would it.

The sheer originality and brutality of what brings the chopper down. No expense is spared on the black and orange fireball either.

Not that interesting and quite well known, but the film was named after Ian Fleming’s estate in Jamaica. The film was also the first in a three-film product placement tie-up with BMW, which saw Bond driving a sky blue Z-3, probably much like the one your mum’s hairdresser has. It was controversial at the time, and still is frankly.

Still want more? Then check out the Exploding Helicopter podcast episode on GoldenEye. Listen to it on iTunes, Stitcher, Podomatic or YourListen.

Posted by Exploding Helicopter at 21:28