Sheena: Queen of the Jungle 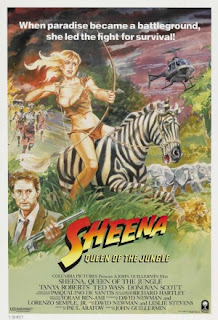 In brief - a witch uses her mental ability of control over animals to ignore due legal process and begin a separatist movement in a nameless African country.

It’s difficult to know where to start with a film of this magnitude. Within moments of it starting you know you're in the presence of something truly special but like all good life lessons, it takes its time to come to its full power.

Sheena: Queen of the Jungle (1984) is essentially a cross between a rejected episode of the A-Team and the film adaptation of George of the Jungle. We open on the tragedy of how Sheena (Tanya Roberts) came to join her isolated tribe. Once orphaned, we get a textbook training montage of Sheena learning to use her mind to control animals under the tuition of a superbly generic shaman.

Unfortunately things don't stay so bucolic - the tribe's sacred mountain is full of valuable minerals and the young prince Otwani wants to get his hands on that cash. Sensing that something is wrong, the shaman makes the journey to the capital to warn the king of this danger. Also making the journey is a pair of American journalists looking to produce a story about King Jabalani.

However not all is as it seems; the evil prince has designs on his brother's throne and arranges a fairly low-key coup at the soiree, intending to frame the shaman for the murder. The reporters discover they have incriminating footage of the murder that implicates the new king and decide to flee the country. Sheena, using her unspecified mental powers, learns of the shaman's imprisonment and sets off to free her.

The prison break scene is the turning point of the film - it is where it becomes obvious that you're not watching a bad film but something special. Sheena attacks the small prison compound with her faithful elephant, some chimps and her 'zebra'.

Chimps versus gunfire goes better than expected and Sheena and her mentor escape into the night. All this is witnessed by the reporters who sense that there's a story in this chimp commander and rush after her into the night.

The rest of the film develops as a protracted chase, with Sheena and Vic Casey always just ahead of the incomprehensibly evil Colonel Jorgenson and King Otwani, before a final dramatic showdown which includes the best helicopter explosion seen so far.

The explosion is nicely built up over time.  Early in the film, the helicopter is attacked by an elephant which bends the blades, teasing the viewer into expecting an early victory for the militant Dr Doolittle.

The explosion scene proper starts with some of the most ominous music ever put to footage of a flock of flamingos taking off as the director teases us with a 'will he, won't he' as he builds up to the attack itself.  He maintains the tension by using footage of what appear to be seagulls menacing the helicopter - the change unsettling the audience more.

Finally the flamingos attack the helicopter, which consists of people waving stuffed flamingos in front of the camera. This continues for much longer than you'd believe before claiming its first casualty: the queen is thrown out of the helicopter by the sheer force of flamingo-wing-buffeting (I assume).

The pilot is slightly distracted by the feathered fury and accidentally swoops low, allowing Sheena to leap to safety in a tree.  The pilot recovers; remembering the noble stoicism of his profession he attempts to resolve the situation by ignoring the flamingos and assuming they'll migrate at some point.

Unfortunately his plan is cut short by what appears to be blood loss causing him to lose control of the helicopter, which plunges in a straight line into the ground.

Surface to Air Flamingos, although with their success I can't see why no one else uses this approach.

1 - although it is mauled by an elephant first.

Sheena is a brilliant film - the sheer variety of things to laugh at, question and debate that are crammed into such a small space is a true achievement. You're never sure which way things will turn next.

You can never be sure whether you're watching something awful, or if the film makers are actually working within some alternative tradition of storytelling and film-making, following rules you just don't know. It has all the usual joy of a bad film, but the flourishes make it something different.

Watch out for some suspected friend of a friend casting with the policeman in the city.

The budget for the film seems to have been over balanced towards getting in a lot of animals as much of the acting is misjudged at best. Even with the apparently limitless lion budget, there wasn't enough left over to spend on make-up on Sheena's best friend, a 'zebra'.

There's also woeful under-use of the many lions on the set and, as an examination of post colonial governments in central Africa, the film lacks historical context or complexity.


Still want more? You can listen to the Exploding Helicopter podcast episode on Sheena on iTunes, Podomatic, YourListen or Stitcher.

Posted by Exploding Helicopter at 17:49

Email ThisBlogThis!Share to TwitterShare to FacebookShare to Pinterest
Labels: Sheena: Queen of the Jungle, Tanya Roberts