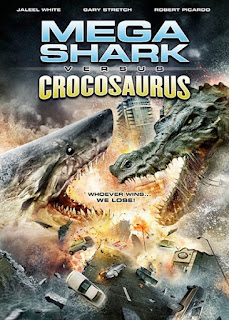 Hollywood used to call them creature features. Over the decades there have been prestigious, big budget affairs like King Kong and Jurassic Park. And there's also been a noble tradition in b-movies with films like Them! Unfortunately, there's also celluloid cack like the subject of this review.

Shark expert Jaleel White and big game hunter Gary Stretch are recruited to a crack military unit - led by Robert Picardo - to slay the two beasts. There’s no explanation as to why either the mega shark or crocosaurus exist. They just lumber into the film as fully formed, homicidal creatures.

Our heroes pursue the beasts which, when they’re not destroying the US Navy or stomping over American coastal towns, are intent on destroying each other.

The film’s been produced on a shoe-string so we only ever briefly glimpse the eponymous creatures. A longer look would have required cash not at the film-makers’ disposal, and only exposed the shoddy CGI further.

Budgets for sets must also have been at a premium, since one all-purpose control room serves as the nerve centre of an aircraft carrier, two submarines and a nuclear power station. 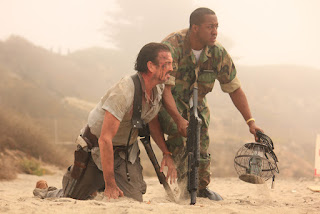 Finally, we end up off the coast of Hawaii where the mega shark and crocosaurus are finally defeated in some kind of underwater volcanic explosion. I’ll confess I wasn’t too sure what was going on at this point as the film was doing little to command my attention.

Still, there were moments of fun along the way, with both monsters gobbling up a fair few extras. They also munch on an impressive amount of the American navy, with the mega shark even swallowing an entire nuclear submarine.

But it’s the crocosaurus who gets to the coup de grace in this film as it stomps around Florida. A TV helicopter, covering the creature’s rampage, hovers too close and is clipped by the tail of the scaly fiend. The chopper spins round wildly and disappears behind a building, before we hear an explosion and see a plume of flame shoot up into the sky.

You’ve got to love the chutzpah of having the chopper disappear behind a building before exploding. It’s such an old trick to avoid special effects work that its blatant and unashamed deployment here can’t help but raise a smile.

We’re talking about a helicopter destroyed by a crocosaurus. Rest assured you are witnessing movie history being made here, people.

You’d be justified in assuming not, but as we don’t witness the actual destruction of the helicopter we can’t be 100 per cent sure. Possible, but highly unlikely.

No-one can fault America’s ability to deal with a crisis. A hare-brained scheme to stop the crocosaurus involves deliberating overloading a nuclear power station to create a massive energy flash.

The captain of a US destroyer phones up the nuclear power station and asks them to overload their circuits. The power station chief doesn’t ask who’s phoning, question the safety, or authority of the request.

Perhaps people phone him to make such requests all the time? 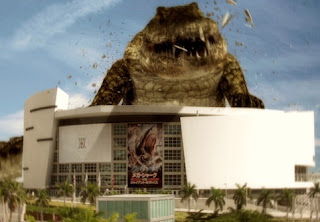 So as not to land itself with an adult certification, the shark and crocosaurus kills are disappointingly gore-free.

“No, no, no. They have to stop shooting at the shark. It’s got a nuclear submarine inside her. She’s a nuclear bomb now!”

He’s clearly a frame off the old celluloid strip though, as his father is Fred Olen Ray – the man behind Hollywood Chainsaw Massacre, The Brain Leeches and Alien Dead.

Review by: Jafo
Posted by Exploding Helicopter at 21:36