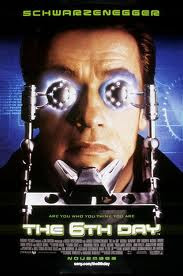 In the wrong film Arnold Schwarzenegger is like a raisin in a bowl of milk.

You may like milk. You may like raisins. But no matter how long you ponder the contents of your bowl you’re only ever going ask yourself what the hell is that doing there?.

Put Arnold Schwarzenegger in the right film, let’s say Predator, Commando, Red Heat or The Terminator, and he’s an effective actor. Put him in the wrong one and he sticks out like a pork sausage at a Jewish buffet.

Sometimes that ‘cock in a hen house’ casting can work. Much of Kindergarten Cop’s comedy comes from the fact Arnie was the world’s most unlikely children’s teacher. Unfortunately as Arnie’s star rose he found himself too often in settings utterly unsuited to his skills.

The 6th Day is one of those films. It requires us to believe Arnie is a normal Joe. A guy with a job, family, and who’s main worry in life is when he’s going to be able to get some hanky panky with his wife (Not something we now know Arnie ever worried about in real life, but hey let’s not go there). 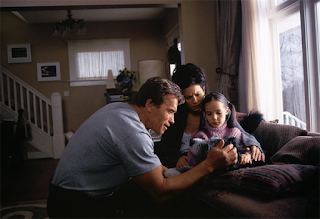 In the finest traditions of Hitchcock, fate and circumstance conspire to put Arnie at the centre of a gigantic conspiracy. Banned technology is being used to clone wealthy and important people effectively offering them the prospect of immortality.

With another actor this film might have worked better. Unfortunately, Arnie come with too much baggage. He spends most of the film being pursued by villains led by Michael Rooker. Arnie though is someone you expect to take the fight to the enemy at the first sign of trouble.

And while the film is essentially an action film it does attempt some commentary on the ethics of genetic cloning. Unfortunately, giving Schwarzenegger great mouthfuls of dialogue about the morality of science is not a good idea. He delivers the lines, but they tumble from his mouth like rubble from a collapsing building.

Fortunately for us, The Governator plays a helicopter pilot. As the film is set in the future this isn’t just an ordinary helicopter. The rotors can be disengaged and jets activated so it can rocket forward like a plane.

But anyway, Rooker and his goons have taken Arnie’s family hostage. Arnie arranges to pick them up by helicopter in exchange for vital information he’s stolen. However, Rooker intends to eliminate all the loose ends in the conspiracy. When the futuristic helicopter comes in to land Rooker shoots it down using a laser weapon.

The chopper explodes and crashes to the ground where it explodes again. Unfortunately for Rooker Arnie isn’t aboard as he suspected a double cross and was flying the chopper by remote control.

I felt a bit sorry for director Roger Spottiswoode. He wants to deliver a decent chopper fireball but is required by the script not to blow the helicopter up to much. That’s because Rooker has to be able to see that Arnie wasn’t aboard and that he’s been double crossed. So there’s lots of flame and explosions but the chopper remains strangely intact despite all the pyrotechnics.

I love Michael Rooker. Maybe I’m watching the wrong type of films, but he seems to have disappeared from view in recent years. Rooker’s got this coiled intensity that he brings to every role. I also love his voice. It sounds a bit choked and emotional. A bit like he’s being strangulated.

As if the casting of Schwarzenegger wasn’t bad enough in this film, the cloning plot requires Arnie to share scenes of dialogue with himself. Double the torture.

Kevin Costner could have been the lead in this film. He turned down the role as it conflicted with other films he was working on.

The 6th Day was originally called The Sixth Day, but was renamed to avoid confusion with The Sixth Sense. I know. They really do think we’re that stupid.

Posted by Exploding Helicopter at 10:31