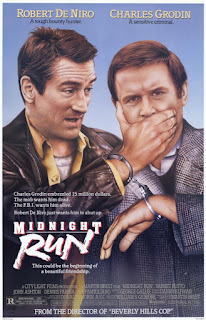 Here at Exploding Helicopter HQ, we sit through a lot of cinematic turkeys in order to catalogue the fiery delights that light up their otherwise turgid bowels. So, imagine our sheer joy at being able to review a film that was enjoyable from start to finish. We almost wept real tears.

Bobby DeNiro plays embittered bounty hunter Jack Walsh out to do one last big money job (it’s always the last job isn’t it?). He has to track down and escort mob accountant Jonathan “The Duke” Mardukas (Charles Grodin) from NY to LA. All whilst avoiding the attentions of the Mafia, FBI and rival bounty hunter (John Ashton). Think of it as Beverly Hills Cop meets Planes, Trains and Automobiles.

Kudos should be given to director Martin Brest for the inspired casting. Despite intense pressure from Paramount to ditch Grodin in favour of a bigger name, he stuck to his guns. And Brest is utterly vindicated in the film, as the chemistry between the emotionally repressed DeNiro, and Grodin’s laconic Mardukas, is a joy.

As with all great actors, the pair are able to say more with a couple of looks than a lesser thespian would with a page of dialogue. As they lurch from disaster to disaster the duo's sparkling turns elevate the film from routine 'road trip' territory to bona fide classic. 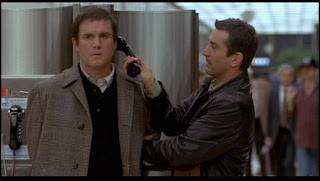 Greatness, though, is no guarantee of entry into the hallowed vaults at Exploding Helicopter. Luckily for cast and crew, the powers at be had the good sense to include a chopper fireball in order for us to allow their admittance to our hallowed hall of fame (or, in our case, hall of flame).

DeNiro, Grodin and Ashton find themselves on the wrong end of machinegun fire, as their car is peppered by trigger happy enforcers in a helicopter. The goons manage to force the car off the road and Grodin winds up in the river, totally exposed to the hovering chopper and its impressive firepower.

Just as the Mob is about to finish off the job, DeNiro takes careful aim at the copter’s rotor arm and with a couple of well placed shots from his pistol causes the chopper to spin wildly out of control like a mechanical bucking bronco set at the wrong. It veers too close to the cliff face and WHAM!  It goes up like a shell-suit on bonfire night.

A pleasingly large, CGI free, explosion with some nice supporting shots of the debris rolling down the cliff side and a lingering pyrotechnical aftermath.

No surprise that Beverly Hills Cop director Martin Brest is at the helm as the film also contains his familiar mix of action and humour.  However he has cut back on the Gorgonzola as the movie has a surprising amount of pathos, morality and sensitivity amongst the normal helping of cheesy one liners, wailing guitar soundtracks, and formulaic car chases that are the staple diet of this genre.

The scene involving Walsh’s daughter and the final goodbye between Walsh and Mardukas are genuinely moving moments.

Nothing of any real note, but the whole set piece is nicely shot and handled with enough skill to satisfy most exploding helicopter enthusiasts.

No of exploding helicopters

Do the Passengers survive?

Unless they are made of asbestos, no. 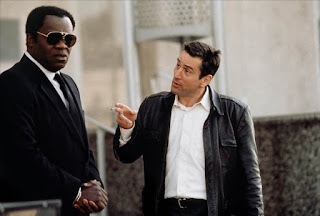 The casting director should be applauded for a fantastic ensemble cast. If the alchemy between DeNiro and Grodin doesn’t wet your whistle then you have Yaphet Kotto chewing up the screen as the menacing Agent Mosely (you might remember him as Parker in Alien), slime-ball loan shark Joe Pantoliano (Eddie Moscone AKA Francis Fratelli in The Goonies), John Ashton (lunk-headed rival bounty hunter Marvin Dorfler AKA Sgt Taggart in Beverly Hills Cop) and Dennis Farina as badda-binging Mob boss Jimmy Serrano. You might not know their names but you definitely know their faces.

If I were hyper-critical I would question the Mob’s decision to use a machine gun and a helicopter as a means of discretely eliminating a missing fugitive. I guess the Mafia isn’t synonymous with subtlety.

Despite being a corker of a film, it was perhaps the catalyst for DeNiro’s subsequent slippery descent into the legacy-threatening light comedy, and the hell that has been Analyze That, A Shark’s Tale and Little Fockers.  Don’t get cocky kid.

Grodin decided to take a 13yr hiatus after starring in Beethoven and eschewed the Hollywood lifestyle to be a stay-at-home dad to his kids. Aaah, what a bloody nice bloke.

Still want more? Then listen to the Exploding Helicopter podcast all about Midnight Run. You can listen or download via iTunes, Podomatic, YourListen, Stitcher or Acast.

Posted by Exploding Helicopter at 17:05