Transformers 2: Revenge Of The Fallen 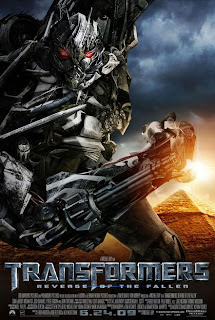 Shia LeBeouf (Sam Witwicky), John Turturro (Seymour Simmons) and Megan Fox (Mikaela Banes) are back in this overblown, protracted, charmless, empty-headed, dogs dinner of a sequel that once again sees the Autobots fighting the Decepticons to protect Witwicky who has accidentally acquired ancient secrets, after touching a shard of the destroyed Allspark, that are key to the survival of the human race and harvesting the sun qtyroihafosihdfaifhdrty3454563....zzzzzzzzzzzzzzzzzz...oh sorry...I fell asleep on my keyboard typing that.  You catch my drift.

If you thought the first film was bad you underestimate the turd producing qualities of Michael Bay, who manages the seemingly impossible feat of dumbing down one of the dumbest films every made.  Someone should tell him sunsets, CGI and slow motion are no substitute for a well written plot, clever direction and genuine drama.

The attempts at comedy are incredibly lame (the introduction of two wisecracking Autobot twins Skids and Mudflap reach Jah Jah Binks levels of misjudgement), the action is just so OTT you begin to zone out in the first half an hour and the plot is so convoluted only a 5 year old could suspend their disbelief. The whole thing is stuck together with CGI and Megan Fox's cleavage. 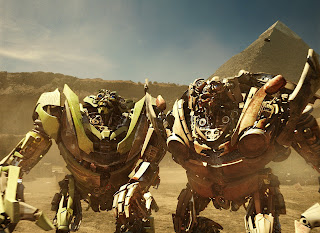 Yet, despite an almost universal critical panning, the film made $836 million worldwide, spawned another sequel, and Bay is in final negotiations to make a fourth. You idiots get the films you deserve.

Why do we put ourselves through the torture of watching this garbage? Exploding helicopters of course, and at least Bay has the good sense to include four.

The first fireball involves the Decepticon Demolisher, a huge construction vehicle that is uncovered in Shanghai. As the military attempt to take him down with a phalanx of weaponry, including two Sikorsky Blackhawks, he manages to catch one of the helicopters on the tail with one of his huge arms as it flies by. It breaks in two and flips out of control and out of shot.

The second and third choppers go down in quick succession at the hands of the Decepticons in the deserts of Petra in a slow motion scene which sees the damaged choppers crash through palm trees and onto the desert floor.  There is not much of a fireball but the rotor blades hack nicely into the sand as they grind to a burning halt.

The last chopper is destroyed so quickly that if you blinked you'd have missed it, in fact, helicopter bible Rotary Action did.  Decepticon leader The Fallen has clambered on top of a huge pyramid that contains a Sun Harvester (don't ask) and uses his telekinetic abilities to attract all the tanks and planes to him. Amongst the collection of vehicles that smash against the pyramid are a Sikorsky Blackhawk that slams against the side of the structure and bursts into flame.

For most directors the inclusion of a chopper fireball is a set piece to be lingered over. The denouement to adrenaline fuelled action sequence. To Bay they are nothing more an afterthought.  For a man who farts out CGI set-pieces in his sleep, including exploding helicopters in proceedings is akin to most directors adding a couple more pretty girls to a crowd scene.

Two of the choppers fireballs happen in a flash with the minimum of fuss or the chance for the viewer to linger over the wreckage. The action is just so busy the explosions become redundant.

First known use of telekinesis to destroy a chopper? To be honest if you haven’t seen a giant robot smash up a helicopter you haven't watched the first film.

No of exploding helicopters

In the double helicopter explosion in the Egyptian desert all four passengers emerge virtually unscathed from the downed Blackhawks despite crashing into the ground from a great height. Sand is very helicopter friendly apparently. 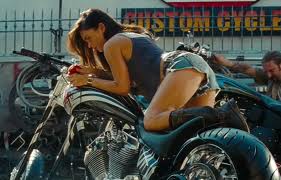 Megan Fox has a nice ass.

If the Transformers are supposed to live unobtrusively amongst us as cars, planes and washing machines they spend a remarkable amount of time casually strolling about in their shiny 30ft high finery loudly fighting each other and blowing things up.

"We got lost. We tried to get bigger. It's what happens to sequels. It's like, how do you top the first one? You've got to go bigger. Michael Bay went so big that it became too big." Shia LaBeouf

"The real fault with Transformers 2 is that it ran into a mystical world. When I look back at it, that was crap." Michael Bay

The writing team of Rovert Orci, Alex Kurtzman and Ehren Kruger were paid $8million dollars to come up with this convoluted boloney. Probably the biggest waste of money since producers shot £75 million making the Affleck-Lopez disaster Gigli.

Review by: Neon Messiah
Posted by Exploding Helicopter at 19:28