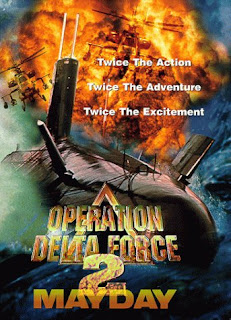 Chuck Norris is not in this film. That’s because the Operation Delta Force series is entirely unrelated to the bearded beat 'em up stars' Delta Force films. As the producers are at pains to point out, any confusion is entirely accidental and was in no way, shape, or form an attempt to trick unwitting viewers into watching these films. Yeah, right.

So what we get here is a strictly routine military action film. A bunch of no-mark actors, led by Skip Lang (Michael McGrady), have to stop international terrorist Lukash (J Kenneth Campbell) who’s hijacked a cruise ship and a Russian submarine.

Unless Lukash gets $25 billion dollars he’s going to fire its nuclear weapons. And if anyone interferes with the plan, he intends to sink the cruise ship with all its passengers.

So, is this any good? Well, despite an impressive amount of action, the film never really gets the blood pumping. The acting is turgid and the script flaccid. Everything, including the script, acting and editing, feels one beat off. And it leaves the film feeling longer than it actually is.

That said, the film isn’t without its compensations. The hijacking of the cruise ship is great fun, as Lukash’s mercenaries infiltrate the ship's crew disguised as waiters. With their burly physiques and identical crew cuts, they're the most unlikely looking catering team Exploding Helicopter has ever seen. Still it’s not often you get to watch a film where all the villains are wearing red velvet dinner jackets.

Additional entertainment is offered by J Kenneth Campbell who puts in a suitably energetic turn as the film's pantomime villain. Unfortunately, there's no one else in the cast for him to bounce off.

So, to the main point of this review: the exploding helicopter action. This occurs during the film's opening as we're introduced to Lang and his team. We meet them as they fly into Iraq to rescue some American soldiers.

As they fight their way into the baddies compound, a helicopter fires on our heroes. However, they rake it with enough machine gun fire that it crashes on top of a building, whereupon it blows up in spectacular fashion.

A great fireball with an impressive scale to the explosion. Although confusingly, after making it look like the chopper and building have been blown to smithereens, in a later scene we can see the semi-intact helicopter on top of the flattened building.

In a film that is the dictionary definition of routine I sadly have to report no exploding helicopter innovation.

While his performance in this is uniformly wooden I was very excited to see Michael McGrady in the lead role. He’s spent most of career in TV and is currently enjoying a higher profile as a character in the series Southland.

However, I know him best as the voice of Rusty Galloway in the computer game LA Noire. If you’ve ever played the game you’ll know what a delight the sardonic, embittered, world weary Galloway is.

The soundtrack to the film is abysmal. It sounds like it’s been farted out in five minutes on a junk shop synthesizer using only the ‘synth trumpet’ setting. Truly horrendous.

The very puzzling: “Time to load and lock, and rock n roll.”

Everyone knows it’s “Lock and load” and flipping it round misses the rhyming scheme of lock and rock.

Operation Delta Force doesn’t seem to have served as much of a career springboard for many involved in it. Except for Danny Lerner who wrote the story. After graduating from the world of DTV he’s gone on to work as a producer on The Mechanic, The Expendables 2 and Conan The Barbarian.

Review by: Jafo
Posted by Exploding Helicopter at 18:18