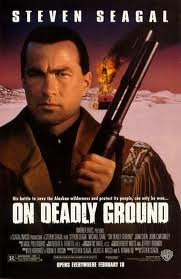 On Deadly Ground (1994) is the film which brought Steven Seagal’s career to a juddering halt. He’d graduated from martial arts thrillers to box office star courtesy of Under Siege. He could have consolidated his new-found status by churning out a few conventional cop thrillers. Instead he chose to save the planet.

It’s easy to mock Seagal for this. But you know what? You can’t knock the cause. We are damaging the planet. And what have any of Seagal’s peers in action cinema – Stallone, Van Damme, Schwarzenegger – done to help?

There is, though, plenty you can mock in this film. For starters there’s Seagal’s bizarre over-identification with Eskimo culture, which sees him wander through the film wearing an eccentrically fringed, animal skin jacket.

This culminates in a surreal dream sequence where Seagal becomes the Eskimos’ spiritual warrior. He uundergoes a hallucinatory rite of passage where topless women gyrate in front of him, before he’s required to kill a bear in hand-to-paw combat, and be ‘reborn’ in a lake.

This is all before the film’s closing scene where Big Steve delivers a five-minute monologue on the evils of the oil industry, and outlines a conspiracy to prevent the development of renewable energy.

Yes, it’s bonkers. But it’s also brave and ballsy, with enough demented energy and over-the-top brio to make it one of my favourite Seagal films.

And while Seagal’s primary concern with this film is protecting the environment, he still finds time to deliver on the conventions of the action film – including a helicopter explosion.

A team of mercenaries fly in to eliminate Seagal and stop him interfering with the oil-drilling operation. However, like a deranged survivalist, Steve keeps a remote cave in the wilderness chock full of explosives and weaponry.

The mercenaries track Seagal to his armoury. But having grabbed the equipment he needs, Whispering Steve blows up the cave – and the helicopter gets caught in the blast.

A crackerjack chopper fireball. In the time-honoured tradition of exploding helicopter movies, the chopper pilot hovers at just the right distance to allow the copter to be consumed in the explosion.

And as the explosion goes off behind Seagal, we get to see him dive away in slow motion, in vintage, action movie fashion.

First known use of a cave to blow up a helicopter. 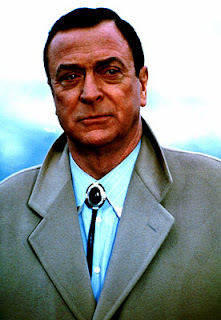 In keeping with the extraordinary over-the-top quality of the film, there’s a fantastic, scenery-chewing performance from Michael Caine.

With a bizarre slicked back, black hairstyle, Caine’s every third word consists of “sonofabitch” as he erratically attempts an American accent. And, in one particularly memorable scene, he leaves us with an extraordinary image, raging: “I’m gonna have Eskimos and environmentalists probing every orifice of my body for the next two weeks.”

Sadly, On Deadly Ground remains the only film Seagal has ever directed. Today Steve concentrates on the routine cop thrillers his agent was probably always telling him to do. We can only hope that Seagal will one day go behind the camera again, and gift the world a further classic.

The film delivers a conveyor belt of classic dialogue. Corking lines are scattered throughout the script like confetti.

There’s the bizarre from Seagal: “You tell your father I’m nothing but a mouse hiding from the hawks in the house of a raven.”

The crude from the henchmen: “I want you to protect this rig like it was your sister’s cherry.”

And, of course, mind-blowing, epic, mouthfuls of bollocks. [Talking about Seagal]: “He's the kind of guy that would drink a gallon of gasoline so he could piss on your campfire! You could drop this guy off at the Arctic Circle wearing a pair of bikini underwear, without his toothbrush, and tomorrow afternoon he's going to show up at your pool side with a million dollar smile and fist full of pesos. This guy's a professional, you got me?“

Empire Strikes Back director Irvin Kershner cameos as the director of a cheesy TV advert that Michael Caine films to highlight his green credentials.

Still want more? Then check out the Exploding Helicopter podcast episode on On Deadly Ground. Download the episode from iTunes, Podomatic, YourListen, Stitcher, or acast.

Posted by Exploding Helicopter at 19:02