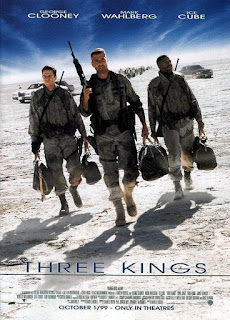 I was talking to a friend the other day and saying that I really needed to get more war movies on the site. Any post-Vietnam war film has got to be a rich source of helicopter explosions.

So with fortuitous timing Three Kings (1999) turned up on TV. It’s set just after the first Gulf War in 1991. A ceasefire is in place and the coalition forces are getting ready to return home.

As they administer the surrender of Iraqi troops four soldiers come into possession of map detailing a buried stash of stolen gold. With a return to the drudgery of their day jobs the soldiers decide that liberating the bullion will be more rewarding than liberating Kuwait.

The four soldiers - played by George Clooney, Mark Wahlberg, Ice Cube, and Spike Jonze – head out into the desert to track down the gold. Along the way they have run-ins with the remnants of the Iraqi army, freedom fighters and a journalist intent on filing at least one decent story.

Now I always love watching films to see how they attempt to slip something into the story that will later turn out to be key to the plot. Take for example Die Hard which, alongside beginning with a near flawless piece of character exposition, explains why Bruce Willis spends the rest of the film running around in bare feet.

At their worst these types of plot devices are ball-achingly painful. Usually when the director doesn’t trust the audience to pick up on the detail and draws out attention to it with all the subtlety of a knee-capping.

Fortunately the one in Three Kings, whilst by no means perfect, is certainly at the superior end of the scale and, most excitingly for me, central to the films helicopter explosion. 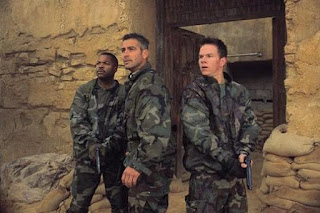 So in an early scene we see the four mismatched soldiers driving out into the desert in a truck. A couple of them are goofing around in the back trying to shoot American footballs which they’re throwing out the back while Ice Cube and Spike Jonze argue about the merits of black quarterbacks.

The plausibility of the scene has already been set-up by conversations earlier in the film about how little action they’d seen as part of the conflict. And with Spike Jonze’s white trash cracker character established you can believe it when he straps an explosive to one of the footballs that he throws out the back.

While the scene makes sense within its self, it’s too distinctive to for you to think the exploding footballs won’t make a reappearance later. Sure enough it does when one of the exploding balls is dropped down a ventilation shaft.

Is that the last we’ve seen them of them though? No. Because when an Iraqi helicopter attacks their position. Ice Cube takes to the roof of the building they’re in armed with one of the exploding footballs which he pitches at the cockpit of the chopper. Touchdown!

Director David O. Russell doesn’t fumble the ball. He goes the whole ten yards with this helicopter explosion.  Slow motion, multiple angles of the explosion and then when the shattered fuselage crashes into the ground it blows up again. I have nothing but the highest praise for how Russell lingers over destruction of this chopper.

You not seriously telling me you’ve seen another film where they’ve used an exploding American football to blow-up a helicopter are you? 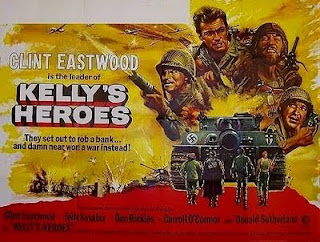 This is one of those rare beasts – an action film which is both fun and intelligent. The premise of the plot has a lot in common with Kelly’s Heroes. But the plot’s always got a new twist that it’s ready to throw at you to keep you interested. The scripts also got a nice line in subversive humour.

I particularly liked how the political context of the Gulf War is cleverly used in this film. With the civil divisions between the Shia population and Sunni ruling elite adding both a dramatic element to the plot but also providing a subtle commentary on the consequences of this conflict on the Iraqi people themselves.

You know what I really can’t think of one.

The plot to Three Kings has more than a passing resemblance to Kelly’s Heroes starring Clint Eastwood. Interestingly the part was originally intended for Clint Eastwood but director Russell wanted a younger actor. Nicholas Cage was also considered before Clooney was cast.

Posted by Exploding Helicopter at 15:11