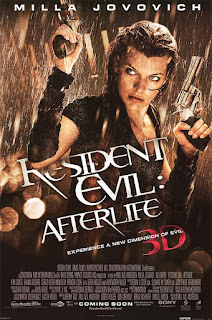 The blond Dutchman burned an indelible image into the mind in Blade Runner. Since then, barring the odd exception, Hauer has ground out a living in unexceptional sci-fi flicks. Continuing to trade on the diminishing cache of his role as the psychotic replicant Roy Batty.

Jovovich career mirrors Hauer’s. An early appearance in the acclaimed sci-fi flick The Fifth Element has been followed by the middling Ultraviolet and the soon-to-be five strong Resident Evil franchise.

I’d like to think 15 years from now she’s still going to be ploughing away in the genre. Widely recognised as the undisputed Queen of low budget sci-fi.

Resident Evil: Afterlife (2010) is the fourth entry in the series. In brief, Alice (Milla Jovovich) is continuing her mission to destroy the Umbrella corporation as she seeks out other survivors who are heading for the virus free outpost of Arcadia.

Probably not unreasonably, the film makes little allowance for viewers who might be joining the franchise at this point. Having once played the computer game which spawned this franchise little prepares you for what is going on.

Resident Evil: Afterlife felt a bit like it’d been bolted together in an Umbrella laboratory. Take a smattering of characters from the earlier films. Borrow liberally from The Matrix, The Thing and Dawn of the Dead (2004) and overlay with enough Resident Evil lore to keep the fans happy.

It‘s not terrible just utterly unexceptional. That said Jovovich has a certain impassive faced cool as Alice which I kind of like. Action cinema is sadly very short of bona fide female leads and Jovovich is definitely one.

While there’s little original offered here, director Paul W S Anderson keeps makes sure there’s a shiny and slick gloss to all the action. This was released in 3D in the cinemas. I was watching this in good old fashioned 2D so certain sections are made completely redundant.

One of the big action set pieces opens the film. Alice infiltrates an Umbrella base in Japan in a particularly Matrix-lite sequence.

Umbrella’s evil mastermind Wesker (Shawn Roberts) escapes in a cool double rotor bladed helicopter which looks a bit like a stealth fighter plane. Unbeknownst to him Alice has sneaked onboard. The two shape up to have a show down, but Wesker is a bit of a dim witted evil mastermind. He fails to properly engage the auto-pilot and the chopper goes crashing into the side of a cliff before he and Alice can get it on. 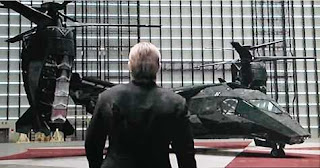 We then have to wait for the end of the film before we get any further chopper fireball action. This time it’s Alice’s turn to be a bit dim witted. Having bested Wesker in the film’s climatic fight, Alice locks him into a massive laboratory come warehouse. Only she locks him in with some of those cool choppers we saw earlier.

Flying off he thinks he’s outfoxed his opponents at the last. Using his patented ‘evil mastermind remote control unit’ he sets off the self destruct system on his base. Only Alice in a seemingly pointless piece of chicanery Alice has put the explosives onboard his craft. Cue predictable moment of confusion as Wesker hears the countdown begin rather closely to where he was sitting than he’d planned.

I can’t say I was too impressed by the helicopter explosions in this. We barely see the first one and have to content ourselves with an impressive amount of burning wreckage. I guess they couldn’t have shown us anymore as otherwise we’d be wondering how anyone managed to survive the crash. Especially as there’s 70 minutes left in the film which Alice and Wesker need to appear in.

Not to great. First known destruction of a helicopter by a human zombie mutant.

Yes, both Alice and Wester survive the first exploding helicopter. It’s also possible Wester also survives the second explosion as some eagle eyed viewers claim to have seen a parachute falling following the explosion. With one eye commendably fixed on the future of the franchise director Paul W S Anderson wisely keeps his options open for the next film.

Kim Coates plays Bennett a slimy film producer who is one of the survivors that Alice meets. Coates specialises in these roles and I always like to see him play the. He gets to kill a couple of people in particularly callous fashion. It’s a nice turn but you just wish he had a bit more dialogue or a particular scene where he can get his teeth into.

One for instance like this classic scene from The Last Boy Scout (1991).

With this film and a small role in Black Haw Down Coates also has some impressive exploding helicopter credentials.

Jovovich adopts a croaky dead pan voice when she’s plays Alice. A bit like she’s trying to do a Clint Eastwood ‘Man With No Name’ type drawl. Sometimes it works, a lot of the time it really grates.

Much like the T-virus that the Resident Evil world revolves around, this film franchise refuses to die. This, the fourth in the series, is the highest grossing film of the franchise. Unsurprisingly a fifth film is slated for an autumn release in 2012. Two further CGI-only spin-off films have also been produced - Resident Evil: Degeneration and Resident Evil: Damnation.

Review by: Jafo
Posted by Exploding Helicopter at 10:48