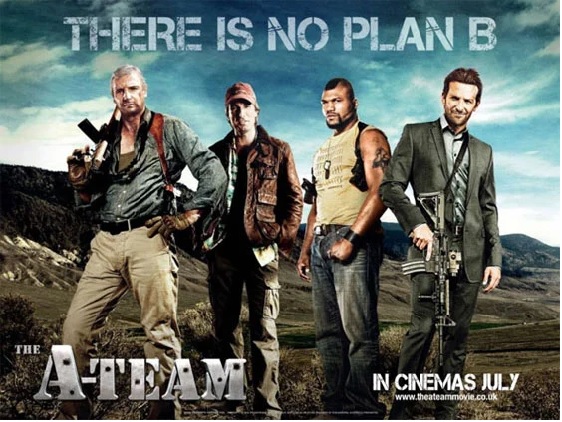 You'd have thought the makers of The A Team (2010) had pulled their trousers down and taken a dump on the faces carved into Mount Rushmore, such is the opprobrium heaped on this film.

Now I loved TV series when I was a kid, but that doesn't mean I can't recognise it's flaws in this Eighties cultural landmark. Formulaic, and often silly to the point of farce, the series required not so much a suspension of reality as a complete detachment from it.
How else could tens of thousands of rounds of ammunition be fired without by our heroes without once injuring, letting alone killing, someone?
So, when Exploding Helicopter reads complaints about this film's infamous flying tank scene, we say it's no more ridiculous than being imprisoned in a warehouse with a old tractor and a welding torch. Not once, but every single week.

Don't get Exploding Helicopter wrong. We're not about to launch a full scale defence of this film. The film is far from perfect, but the idea that it's an act of sacrilegious desecration is to assign an utterly undeserved status to the source material.
The film signals it's intent right at the start and you either buy in then or it's best to just abort. Interestingly for us the sequence is the key one for us as it includes a helicopter explosion.

Having requisitioned an old chopper from a hospital, the newly assembled A Team attempt to affect their escape from Mexico. They're pursued by some corrupt army officers in another helicopter.

Unfortunately, the old air ambulance the A Team are in has no weapons, so all they can do is take evasive action. This involves an aerodynamically impossible 360 roll along with some other equally implausible manoeuvres avoid some missiles.

Having used up all their tricks, it looks like the A Team's chopper is about to blown from the sky. But unbeknownst to the Mexicans pursuing them, they've now crossed into US airspace. An American jet fighter appears out of nowhere and blows the pursuing helicopter to smithereens.

We enjoyed the helicopter chase sequence even if it borrowed it's aeronautic acrobatics from Blue Thunder and Die Another Day.

The explosion was well executed but it's incredibly brief and director Joe Carnahan cuts straight to the whooping reactions of the A Team in the other helicopter.

While the fighter plane's missiles are the direct responsible for the helicopter's destruction, the ultimate cause was clever use of international airspace. First known usage as far as I can tell.

No. If we were talking about the tv series the answer would obviously be, 'but of course'. However, unfortunately for everyone in the chopper we're no longer in the 80s.

I'll admit I'm struggling with this one. All told this is a pretty derivative actioner. Nothing's too great, nothing's too bad.

Liam Neeson. Does the man ever enjoy himself? He always looks pained in everything he appears in. Every time he smiles it looks like he's been cued to do it by someone shoving a hand up his backside.

The script for The A Team was written by Skip Woods who is quickly carving out a reputation as a guarantee of exploding helicopter action. He also wrote the screenplays for X Men Origins: Wolverine and Swordfish which both feature helicopter explosions and chopper sequences.

Review by: Jafo
Posted by Exploding Helicopter at 15:52