You Only Live Twice 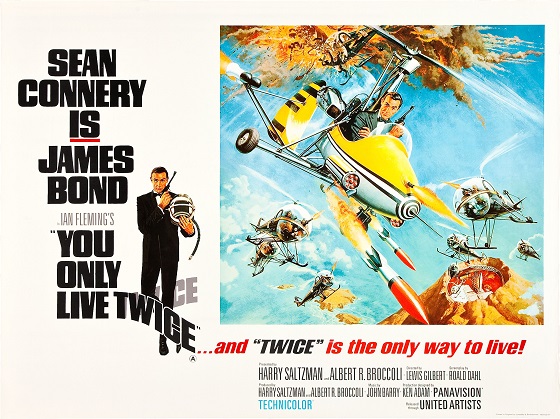 As a kid, I used to watch the James Bond films over-and-over again. My dad had taped them off TV, and during the long summer holidays I’d work my way through the series, then go back to the beginning and start again.
So, having engrained these films into memory I’ve very rarely felt the need to revisit them. That’s why, before this viewing, it must be around 25-years since I’ve seen You Only Live Twice.
The experience was very strange. The film was exactly as I remember, yet simultaneously different. What my younger self had overlooked was the off-the-charts level of sexism and smut.
“Why do Chinese girls taste different from other girls?” asks Sean Connery in the film’s opening line of dialogue, setting the tone for the relentless innuendo that’s about to follow.
The other point which jumped out at me was the ridiculousness of Connery’s Japanese conversion. It’s the least convincing Japanese fake I’ve seen since I bought a Matsui TV.
As was then usual, the great John Barry provides the score. And if you ask for my two pence’s worth on the subject, the music is among his best work. The Nancy Sinatra-sung theme tune is also a cracker.
The plot, though, is pretty loose. In fact, during scene where Bond gets married and trains as a ninja for no discernible reason, it completely halts. It’s as if the scriptwriters went outside for a cigarette and told everyone to carry on without them for 20 minutes.
So, let’s wrap up these random jottings with the some exploding helicopter talk. Bond must find Blofeld’s base, so Q introduces our hero to Little Nellie - a heavily-armed, flat-pack helicopter.
007’s reconnoitre appears attracts the attention of four Spectre helicopters. Fortunately, in an earlier scene, Q had handily briefed Bond and the audience on the different weapons Little Nellie has.
Bond uses the flame thrower to despatch the first helicopter, before manoeuvring above his next victim. Now it’s time for the aerial mines which float gently down on little parachutes to blow up the helicopter and its bemused pilot.
Bond continues to make short work of Spectre’s chopper squadron by blowing-up the next with his rockets, before completing the full house by destroying the final foe air-to-air heat-seeking missiles.
Artistic merit
Top notch, especially as you don’t often get to see an aerial dogfight played out between helicopters. And Little Nellie’s range of weaponry means we get to enjoy diverse methods of destruction.
Exploding helicopter innovation
First known use of a do-it-yourself helicopter. And aerial mines. I’ve never seen them before or since.
Number of exploding helicopters
Four. Which ranks it highly in the list of films with multiple exploding helicopter, alongside Broken Arrow, Rambo III, and Independence Day.
Positives
Helicopter fans get a nice treat during a car chase earlier in the film. Agent Aki (Akiko Wakabayashi) calls up a big Chinook helicopter equipped with a huge magnet to scoop up the villains car before dumping it into the ocean.
Negatives
Even by Bond’s standards the speed with which he moves in on his new Japanese wife after the murder of Aki is rather unseemly. Christ man, she still warm in her grave!
Favourite quote
“Little Nellie got a hot reception. Four big shots made improper advances towards her, but she defended her honour with great success.”
Interesting fact
You Only Live Twice is the only Bond film where 007 does not drive a car.

Still want more? Then listen to the Exploding Helicopter podcast episode on You Only Live Twice. Listen via iTunes, Acast, Sticher, Spotify or right here.

Posted by Exploding Helicopter at 13:20