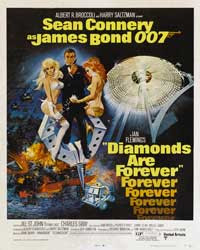 Is this the worst James Bond film ever? It's hard to say. Especially as there’s been considerable competition for that title down the years. But one thing’s for certain, this is a decidedly shoddy effort.

Normally, Britain's most famous spy to performs his acts of heroic espionage against a backdrop of glamorous, globe-spanning locations. However, Diamonds Are Forever (1971) takes place, almost exclusively, amidst the sterile environs of Las Vegas.
Along the way, the viewer is left unshaken and unstirred by scenes set in a funeral parlour and at a petrol station forecourt. As for the 'big' finale, this is staged on a visibly rusting oil rig. So much for 007's license to thrill.
Looking at the drab settings, you start to wonder if the producers didn't have much money to work with. Which, as it turns out, they didn't.

With George Lazenby hanging up his Walther PPK, Sean Connery was lured back with a whopping cheque for $1.2m. A then unheard of sum for a film, Big Tam's inflated fee was 20 per cent of the film's entire budget. No wonder there was no money for location filming or special effects work (more on that later).

Little expense also seems to have been expended on the decidedly pedestrian story. Until the finale, events unfold with little urgency. And for the most part the plot has all the scope of a private eye novel.

Still, the film is not without elements to enjoy. Charles Gray puts a great turn in as Blofeld, effortlessly oozing urbane charm with his wonderfully expressive voice.

And it's to them that we owe the film’s first helicopter explosion. They double-cross a diamond smuggler by placing an explosive inside the suitcase of cash he's come to collect. As he flies off in a helicopter, the hidden explosive detonates blowing-up the whirlybird.

But that's not the end of the chopper fireball action. During the oil rig finale a squadron of helicopters are flown in to attack the villain's lair. The oil rig’s defences try to hold off the attack and machine guns manage to shoot down two of the attacking copters.

Diabolical. The film's budget issues are all too apparent in these scenes. Previous Bond entries (You Only Live Twice, From Russia With Love) had successfully and authentically blown up helicopters using clever model work. Here the helicopters just disappear behind orange special effects blobs.

There’s no innovation on offer in this film. If anything Diamonds Are Forever seems to be trying to take the art of exploding helicopters backwards.

I love the guy who sits passively in the control room on Blofeld’s oil rig intoning the audible countdown in a thick, deadpan, German accent: “Zyx min-eeets und koun-ting!”

Connery’s bloated pay check estimated to be around 20% of the film‘s budget. Would the helicopter explosions have looked to shoddy if they handed over so much cash?

The James Bond franchise could have looked very different as the potential casting for Diamonds Are Forever shows.

George Lazenby was offered the film, but declined as he was didn’t want to sign a lengthy contract to appear in further sequels.

The producers then tried to get Michael Gambon who declined on the basis of ill health. Batman Adam West also turned down the role because he felt Bond should be played by an Englishman. American TV actor John Gavin was then signed to the role. But Gavin subsequently had his contract paid in full after the record breaking deal with Connery was struck.

Review by: Jafo
Posted by Exploding Helicopter at 20:35