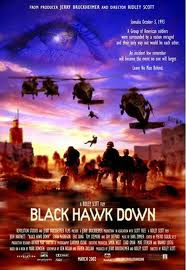 Black Hawk Down depicts events which shaped American foreign policy for a decade. Not that you’d know it from this film.
First, a quick recap. In 1993, US soldiers bungled a mission to capture militants attempting to overthrow the government of Somalia. The ensuing debacle left 19 American soldiers and unknown number of Somali civilians dead.
Beyond the human casualties, the pictures of dead US soldiers being dragged through the streets turned the American public against intervening in foreign wars. The humanitarian consequences of this would be keenly felt in Rwanda and the Balkans.
All which suggests that Black Hawk Down (2001) had the potential for being an interesting film. One with significant political heft. Unfortunately, someone asked Jerry Bruckheimer to produce it.
With the ‘King of High Concept’ at the controls any thought that the film might provide a political or historical critique is swiftly abandoned. Instead we get a straight-out shoot ‘em-up. A loud ‘Huah!’ is as close as the film comes to making an intellectual statement.
Still, as an action-fest, Black Hawk Down is a marvellously effective piece of cinema. Ridley Scott, a man whose made a career out of glossy but shallow entertainments, portrays conflict in an impressively gruesome and visceral way. The violence is brutal, sudden, unpredictable, and confused. If this is what combat like, watching this film is as close as Exploding Helicopter ever hopes to come to it.
Complementing the visual thrills is the excellent cast. The depth of talent is a wonder to behold. Amongst stiff competition, Tom Sizemore emerges as the MVP. As a hard-ass Lieutenant he swaggers through the film in a manner reminiscent of Robert Duvall’s napalm snorting Kilgore in Apocalypse Now.
Also faultless is the amount of helicopter action. Indeed, helicopters are central to the film - the title is a reference to the mission’s turning point. But in the first half of the film, it looks as if chopper conflagration fans are to be disappointed.
Two Black Hawk helicopters are shot down, but neither explode. However, with members of the crew still alive, US soldiers attempt to rescue their stricken comrades.
After fighting their way to one of the crash sites they find, there’s no one left to save. So, to stop the aircraft providing anything of value to the enemy, they plant a charge inside the wreckage blowing it up.
The second helicopter explosion is altogether more satisfying. After freeing a trapped crew member, a soldier uses a grenade to blow-up the chopper which explodes with a rich, amber-orange fireball.
Artistic merit
Given the film features innumerable explosions it’s disappointing that the destruction of the first helicopter is fluffed.
Exploding helicopter innovation
It’s unusual to see an already wrecked helicopter explode, however, you can see examples in Courage Under Fire and X Men Origins: Wolverine.
Number of exploding helicopters
Two wrecked helicopters are destroyed.
Positives
As befits a film entitled Black Hawk Down there’s a juicy helicopter crash scene to enjoy. After the whirlybird’s tail rotor is damaged, the pilot desperately tries to maintain control of the stricken aircraft. The scene is sound-tracked by ‘mayday’ calls and angry bleeping warning alarms.
Negatives
Ewan McGregor plays Grimes a desk jockey who’s pressed into frontline service by the crisis. Exploding Helicopter has never been convinced that the Trainspotting star can act, so it’s little surprise that our Ewan’s extraordinary attempt at an American accent only serves to make him sound more Scottish.
Favourite quote
“We got a Black Hawk down, we got a Black Hawk down.”
Interesting fact
Eric Bana’s part was originally offered to Russell Crowe. However, he was unable to do the film and lobbied for Bana to get the part.

Review by: Jafo
Posted by Exploding Helicopter at 21:55