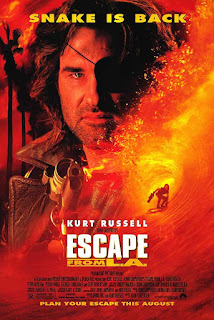 Escape From LA (1996) has got a pretty bad reputation amongst John Carpenter fans.

But you know what? Fans are sometimes the worst judges. They can have impossible expectations, impose creative straightjackets, and overreact to anything which differs from their own preconceived ideas.

Waiting 16 years to make the sequel to the classic Escape From New York (1981) probably didn’t help. Making the job of overcoming the accumulated expectation all the harder. But judged in it’s own merits Escape From LA is a good film.

Carpenter has on one level remade Escape From New York but at the same time made a completely different film. While the first was a simple action film set in a dystopian future, this sequel attempts to combine action with social satire.

We’re presented with a grossly exaggerated, gonzoid, comic book LA, but one rooted in the reality of the city and America as whole. Politics, religion, plastic surgery, capital punishment, the environment, the list of targets the film takes pot shots at is lengthy. It’s unsubtle, over the top, but it’s a subversive vision of America that you don’t often see in mainstream movies.

Sure there are flaws. Some of the editing is shocking, in one scene Valerie Golino is simply cut off half way through a sentence. And the special effects leave a lot to be desired. But they have a certain cartoon-ish quality which fits in with the tone of the film.

You can see this in, what we at this website certainly consider to be, the films key scene: the helicopter explosion.

The films villain and de facto ruler of LA Cuevo Jones (Georges Corraface) has blackmailed the authorities into sending a helicopter into LA in which he intends to escape the prison.

Russell though hijacks the chopper to make his own getaway. Seeing his plans about to be foiled Jones fires a rocket launcher at the helicopter. Badly damaged the chopper flies on trailing flames and smoke.

Unable to land the chopper safely Russell bails out at the last moment.  The chopper crashes into the ground and explodes in a massive fireball.

Whether this was an artistic decision or for budget reasons is hard to know. It’s further complicated by the fact a building in the background of the scene has a big sign on it saying “Miniatures”. 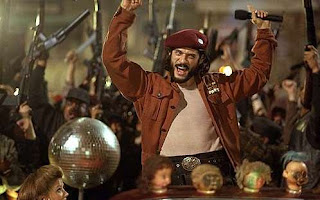 The effects used to create the “fire” onboard the helicopter are ridiculous. They’ve clearly been superimposed with little effort to make it look real. It looks like someone’s napalming a tree line in the back of the helicopter yet Russell’s mullet is not so much as singed by the conflagration behind him.

The helicopter’s final seconds of descent are embarrassing. It’s as if someone is pushing the chopper across the screen with their finger. But when it finally crashes the fireball which erupts looks like genuine pyrotechnics. Nor does it look like any expense was spared here as the fireball is huge, dark blood orange in colour, smeared with sooty blacks. It’s very good.

After the helicopter first lands the rotor blades retract into the chassis. Quite what advantage this lends is never clear. Regardless, it becomes the first known destruction of a helicopter with retractable rotor blades.

It could also be the earliest example of someone escaping a chopper fireball by jumping clear of a helicopter whilst its in flight. The only other example I can think of this is in Die Hard 4.0 where a sniper jumps clear moments before his chopper is destroyed by a flying car.

Three survive and five die in a quite complicated set of circumstances.

To make his escape Russell teams up with a rag tag collection of LA residents, including Steve Buscemi, Pam Grier, and some of her gang. Whilst shooting Cuevo Jones henchman from the helicopter, Grier is shot and killed. When Jones goes to fire the rocket launcher Buscemi fearing a fiery doom leaps clear of the helicopter landing safely after falling on to a shop canopy. 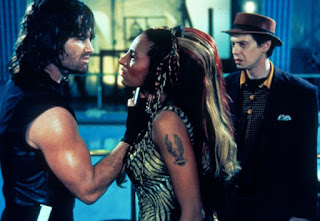 After flying out of LA Utopia and Russell both jump clear of the crippled chopper moments before it crashes and explodes.

Perhaps my favourite Al moment is when he sneakily steals a chocolate bar in Die Hard. Here, he puts in one of his stock non-speaking roles. If when he doesn’t do anything special its just nice to see him on screen.

The quality of the special effects was widely knocked when this film was released. It probably didn’t help that the “envelop pushing” Independence Day came out in the same year.

The film was apparently in the pipeline for over 10 years. A script was commissioned as far back as 1985, however, Carpenter sat on it as he felt it was too ‘light and campy’. Given the end product it’d be interested to know different the final film was from the original draft.

Escape From LA is also unusual as Carpenter made his name making clever remakes Assault On Precinct 13 an updating of Rio Bravo, and The Thing an updating of its namesake The Thing From Another World. This film then is oddly John Carpenter remaking himself.

You want more don't you? Then why not check out the Exploding Helicopter podcast episode on Escape From LA. Listen on iTunes, Acast, Stitcher, Podomatic, or YourListen. Or right here...

Posted by Exploding Helicopter at 07:32