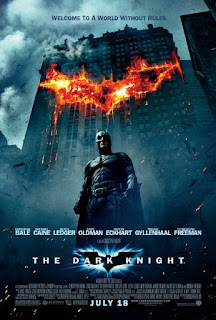 This is a difficult film to tackle. As the most revered superhero ever made, it occupies a sacred place in the affections of a lot of lonely, maladjusted young men who spend far too much time on the internet.
As such, reviewers who are anything other than slavishly fawning towards the film can expect to be besieged by an angry social media mob baying for virtual blood.
Let it not be said though that Exploding Helicopter ever cowered in the face of anonymous keyboard warriors. So, let's dive in and cover the basics.

The Dark Knight is the follow up to 2005's 'gritty' (surely one of the most popular movie buzzwords of the Noughties) reboot of Batman.

Picking up from Batman Begins, the caped crusader's campaign to curtail the criminal capers (we'll always have a soft spot for Sixties Batman) of Gotham's residents seem to have gone quite well.

The criminal elite of the city are feeling distinctly threatened, so make the dubious decision of recruiting the Joker (Heath Ledger in his last full role) to help get rid of Batman. It probably seemed a good idea at the time, but, as it turns out, hiring a mentally unstable psychopath comes with its own set of issues.

Gary Oldman plays Commissioner Gordon, a maverick cop who merrily ignores due process, (although perhaps not in the same way as his role in Leon) in his attempts to bring the criminals of the city to justice. 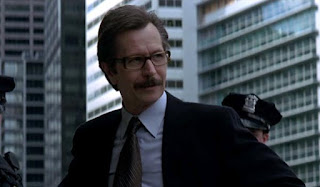 As the film develops, we follow the District Attorney, Harvey Dent as he works with both Batman and Commissioner Gordon to try to bring Gotham back to a reasonable level of street crime and anti-social behaviour. The film then follows the plots and plot-thwarting of the Joker and Batman respectively, until we get to the main finale, a rooftop showdown.

As it turns out, the finale is not the actual finale at all. Instead we're treated to another ending (a phenomenon best embodied by Jackson's 'The Return of the King', a film with more endings than a choose your own adventure book) which ties up the story with Two-Face and sets us up for the series finale.

The film can be thought of as Batman's attempts to plan for his succession. He recognises that he cannot always go on as the illegitimate (but righteous) force of justice in the City and also knows that his successor will need more authority than being simply anointed by the Batman.

The moral difficulties around unaccountable power are acknowledged (if not adequately dealt with) in a plot element around almost Murdochian-levels of phone tapping within the city by Batman. It's a hell of a lot more nuanced than say, 24, in its 'its not wrong if you do it for the right reasons' attitude but is by no means the last word on the subject. 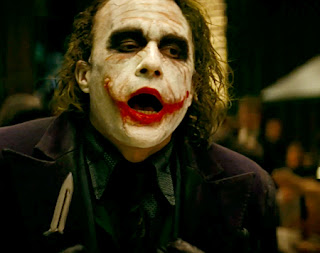 None of this is to say its a bad film, there's so much in there, with some very beautiful shots and solid performances (although I don't think I'll ever engage with the Bale growl properly). Directed by Christopher Nolan, the film really benefits from a determination to do as many stunts and effects shots 'live' as possible.

This culminates in an excellent protracted car chase where the Joker is attacking a police convoy in the hopes of killing Harvey Dent. The whole sequence is superb and includes both a personal movie highlight for me, the flipping of a lorry, and the all important helicopter explosion.

With his control over the route to be taken by the convoy, the Joker manages to plan for the possibility of his plans being thwarted by an apparently unarmed helicopter. As the chase continues, the helicopter drops lower and lower to follow the action. Meanwhile, disposable henchmen string cables across the street between two high rises. The inevitable occurs and the helicopter plunges to earth a tangled mess, before the all-important explosion.

The actual destruction of the helicopter is nicely teased out. The cables go out in plenty of time for the audience to anticipate the helicopter's impending doom.

Flying into what are essentially tripwires is a credit to the devious mind of the writers.

Nearly all the film in truth. This is excellent story telling with a great cast and a great eye to atmosphere and tone.

There is a strange disconnect between the two story strands of the Joker and Two Face. So much energy goes into ending the Joker's story that it feels a bit of a challenge to try to crank up the intensity again to get a similarly powerful resolution to the Two Face story.

"Do you want to see a magic trick?"

Several scenes were filmed on IMAX film stock meaning those sections of the film are shown at a much higher resolution. If you're looking for them, these scenes/shots are easy to pick out.  And were captivating in an IMAX screen.
Posted by Exploding Helicopter at 20:21