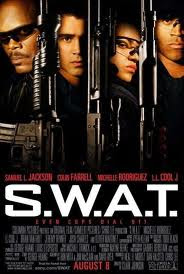 SWAT is a Meccano movie. Functional, bolted together, and with all the joins and moving parts clearly visible.

Surprise! The disgruntled SWAT team member who’s fired at the beginning of the film is the man who Colin Farrell - our SWAT team hero - must go up against in the film’s finale.

Surprise! Their boss is a ‘pencil-pushing punk’ who’s going to have Jackson’s badge and ‘hand him his ass’ if he messes up.

And surprise! The SWAT team member who mentions he likes champagne is the one who sells the team out after they’re offered a huge bribe.

Like the children’s construction toy, it works and it’s effective. It’s just not very attractive to look at.

Once the film’s finished establishing its ball-achingly predictable plot strands, we get to the most interesting aspect of the film - the helicopter explosion.

The SWAT team have to move an international terrorist to a federal prison. Unfortunately, the dastardly villain has offered a $100m prize to anyone who can free him from captivity.

Farrell and his SWAT team buddies are set to helicopter their captive to the prison from the roof of the police station. However, Farrell’s former partner-cum-nemesis has got hold of a long-range sniper rifle and shoots outs the engine on the chopper.

Unable to control the helicopter, the pilot takes the chopper down for a crash landing on the street. Only it’s too hard and heavy and the helicopter explodes on impact.

In a film which religiously conforms to cop movie stereotypes, it’s good to see they didn’t try to get clever by excluding the helicopter explosion.

While it’s fairly routine, there are some nice touches. For instance, as the helicopter begins the crash landing, it clips the top of the police station, which causes one of the rear tail rotors to sheer off and embed itself in a wall - narrowly missing the SWAT team.

We also get to see some of the main rotor blades spin off after the chopper crashes in the street. 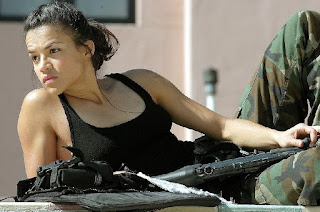 At the beginning of the film Farrell splits with his girlfriend. We never see her again, but there’s a curious throwaway line about her in a later scene. That, combined with the go-nowhere flirting with Michelle Rodriguez, makes me suspect a romance sub-plot was filmed but subsequently cut.

Oliver Martinez, who plays villain Alex Montel, has to be one of the dumbest criminal masterminds in cinema.

His attempt to slip quietly into the US come immediately unstuck when he tries to slip a penknife through customs.

Staggeringly, despite being filmed after 9/11, the immigration officials let him off with a warning and allow him to enter the country.

His next idiotic blunder is to kill his uncle in a restaurant full of bystanders, before taking his dead relative’s car. Martinez manages to drive two blocks before he’s stopped by a policeman who arrests him for driving the car without the proper paperwork.
“I borrowed it from my uncle,” pleads Martinez.
“We’ll just need to confirm that with him, sir.”
Doh!

“What, no roll, Hondo?”
“They only roll in John Woo movies, not real life.”

The litany of directorial talent that turned out to be ‘busy on other projects’, tells you a lot about the quality of this film. Zack Snyder, Michael Bay, John Woo, Joel Schumacher, Rob Cohen and Antoine Fuqua all passed on helming duties. Clark Johnson was eventually signed, having previously only directed in TV.

Still want more? Then check out the Exploding Helicopter podcast episode on SWAT. Find it on iTunes, YourListen, Acast, Stitcher or Podomatic.

Posted by Exploding Helicopter at 20:36