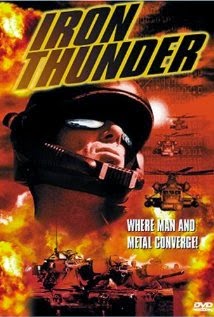 We get no pleasure from saying this, but Iron Thunder (1998) is the worst movie we’ve ever reviewed.

The really sad part is, it’s not without promise. The film has a cool title (so cool that there’s already a movie with the same name starring Anthony ‘Amy’ Elmore) and stars Richard Hatch of Battlestar Galactica fame.

Well, let me tell you. It is all bad. Iron Thunder has nothing a viewer wants: likeable characters, an interesting story, or even just stupid fun. All copies of this cinematic abortion should be eradicated from the earth.

Richard Hatch plays a guy with a plug in his head. This allows him to plug-in to a new experimental tank, supposedly forming a perfect union of man and killing machine. Unfortunately, as anyone who’s watched a film involving testing a new super-weapon will suspect, it’s not long before Hatch’s mental screws come loose causing him to go rogue with the super-tank.

Keen for the return of their expensive hardware, the military despatch a team of soldiers to track down and stop Hatch. Will most of their number be killed before one plucky soul finds a way to circumvent the tank’s superior technology? I wouldn’t dream of spoiling it for you……

Chief among Iron Thunder’s failings is the rock-bottom budget which give proceedings an ugly, junk-like look. From the horrible CD-ROM-style graphics to the toy tanks that are laughably used as miniatures, every expense has been spared with miserly enthusiasm.

Punctuating the sub-crud action are a series of interminable, ball-achingly dull scenes where characters talk to each other to no great effect. Compounding both these problems is the films punishing runtime – a brutal, inexcusable 110 minutes. Why? What were they thinking?

Try to imagine a more stupid Digital Man (1995) crossed with the mentally challenged Bulletproof (1988). Now imagine the whole thing playing out for almost two full hours and you might have some clue as to how unbelievably bad this movie is. 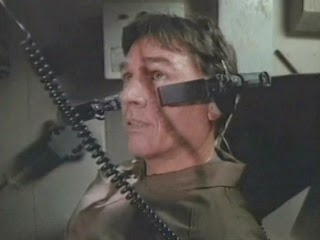 Aptly, the director (or to be more accurate, perpetrator) of this movie is one Jay Woelfel. It is funny how people live up to their name for everything about this film is indeed woeful. It’s a wonder to think that he was ever allowed to unleash this atrocity on the public. How come there were no repercussions? Avoid this movie like the plague.

Still, our duty to cataloguing the world of exploding helicopter movies compels us to provide a review and detail the chopper fireball on display.

The whirlybird conflagration occurs towards the end of the film. A chopper flies with some top military honchos flies out to where Iron Thunder is trundling round.

The crazed Richard Hatch though has decamped from his tank and is now running around with a machine gun. He takes aim at the chopper hovering overhead and fires off a volley of bullets. Naturally, otherwise we wouldn’t be writing about this, the helicopter explodes

In keeping with the z-grade production standards of the rest of the film, the chopper fireball is a shoddy piece of work. The footage of the actual helicopter explosion looks like it might be nicked from another film. Director Woelfel tries to liven up proceedings by having flaming wreckage cascade to the ground. Adding to the lack of believability are the unconvincing reaction shots of people on the ground.

Only known destruction of a helicopter by a man with a plug in his head.

While the film often feels like it’s never going to end, we can confirm that it does have a conclusion.

Every minute between the opening and closing credits.

This review is a guest post by our friends Brett and Ty from the great website Comeuppance Reviews. They're dedicated to celebrating action movies from the eighties VHS era. Check out their website and discover some forgotten gems.

Posted by Exploding Helicopter at 20:38