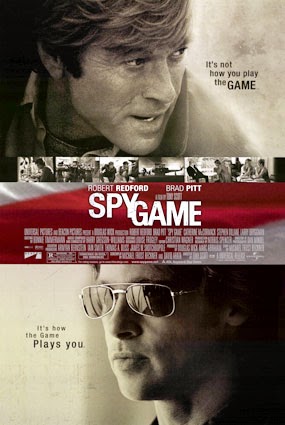 There was a time when it seemed Robert Redford would stay forever young.

While his contemporaries slowly wrinkled and went bald, Redford remained supernaturally preserved. His boyish face, framed by that lustrous golden fop of hair, seemed to elude the ravages of time.

But eventually, Father Time did catch up with him. The craggy lines came, his sturdy posture started to hunch a little, and gradually that perfect, bouncing blonde coiffure started to look like a mockery of the ravaged features below.

Sadly, the only person who didn’t seem to notice any of this was Bob himself.

Oblivious to the fact that his face was starting to resemble a wedding cake left out in the rain, he kept right on choosing classic young man roles. First, there was The Natural (1984), where a 48-year old Redford (already 15 years too old for the role) outrageously appears in a flashback as his character’s 18-year-old self.  Less Sundance Kid, more ‘Sundance, who are you Kiddin’?’

Worse was 1990’s Havana (the famously duff Cuban rehash of Casablanca) where viewers were asked to believe the beautiful young starlet Lena Olin would be powerless before the raw magnetism of Redford – whose face by now was looking as worn and leathery as a battered chesterfield sofa.

It wasn’t until Indecent Proposal (1993) that Redford himself finally realised the game was up. When the only way you can get Demi Moore into bed is by offering her a million dollars, you know your days as a twinkly-eyed lady-killer are over. Following this, Bob promptly took his crow’s feet behind the camera to continue his film career as a director. 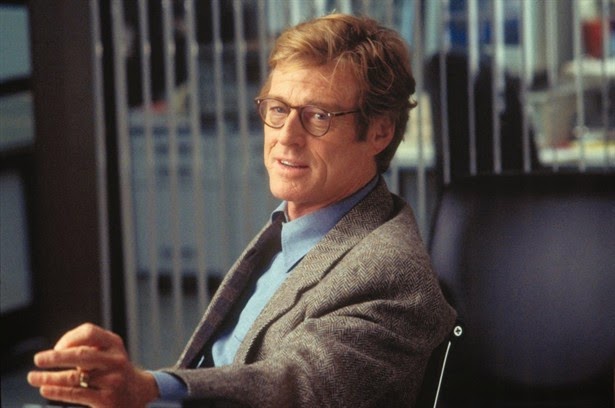 All of which, by round-about route, brings us to Spy Game (2001), a film which saw an older, wiser, age-appropriate Redford return to acting. He plays a veteran CIA agent who’s just about to toddle off into retirement.

But on his ‘last day at work’ (see Danny Glover in Lethal Weapon, Robert Duvall in Falling Down etc), he learns that his protégé (played by Brad Pitt) has been captured by the Chinese government while carrying out an unauthorised mission.

Fearing a diplomatic incident, the CIA’s spineless bosses want to wash their hands of Pitt and let the dastardly Chinese execute him. Will Redford find a way to rescue his friend? And can he do it before the leaving speeches and carriage clock presentation?

Given that Redford is playing a retiree, some viewers might be tempted to sit back and relax, happy in the knowledge that any age-related embarrassment will not be on the menu. Over-confident fools!

Ever enthusiastic to grapple with such an elastic concept as time, it turns out our Bob has picked a film that’s riven with multiple decade-spanning flashbacks. So, we’re barely out of the opening credits before Redford's teleported back 20 years to events during the Vietnam War.

Facing this challenge, most actors would use a little judicious hair-tinting or forgiving soft-focus camerawork to help portray their younger self. Not our Bobbie. He simply dons a Seventies-era flared collar shirt in the ironclad belief that he still doesn’t look a day over forty. (Note: at this point, he was 65.A pensioner. More Cocoon than Platoon material.) It’s patently ridiculous, but all you can do is sit back and admire the chutzpah of the man.

It’s hard to fathom where such copper-bottomed self-confidence comes from, but we perhaps touched on the real reason earlier – it’s that incredible bouffant. 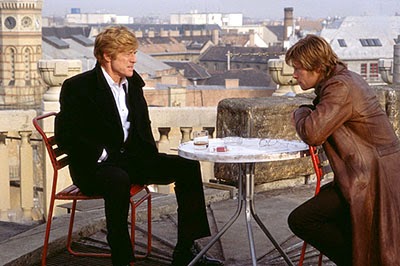 While every other male Hollywood barnet has slowly thinned or greyed over the decades, or simply grown implausible (Stallone, for example, looks like he’s wearing a black woolly cap), Redford’s magnificently-coiffured mop has remained perfectly preserved atop his head.

Each time he looks in the mirror and sees that golden thicket, he must think he’s immortal. Perhaps somewhere in an attic there’s a painting of a balding, greying Redford, but with a face as smooth as a baby’s backside.

And speaking of things that don’t get old, what more timeless movie thrill is there than an exploding helicopter?

This takes place during the infamous Vietnam flashback where Redford orders Pitt to assassinate a top NKVD official. While Pitt lies in wait for his target, he’s spotted by a gook helicopter which opens fire on him. Pitt returns fire with a machine gun, damaging the chopper’s engine.

The wounded whirlybird spins slowly towards the ground before disappearing behind a small hill. We hear a crash and a huge fireball suddenly erupts into the sky. Charlie don’t surf, and after this chopper fireball, he don’t fly either.

You can’t fault the explosion which is a spectacularly large mushroom cloud of reds, yellows and oranges. But, marks have to be deducted for not actually showing the helicopter explosion.

Having the chopper disappear behind a convenient piece of geography is a tired old cheat we liked to see ended. Surely, there’s a Hollywood special effects union that could take action?

Viewers of a certain vintage (particularly those dumbfounded by modern gadgetry) will experience a retro thrill at seeing a real-life pager play an integral role in the film.

For younger readers, a pager was a bit like a mobile phone on which you could receive, but not send, very limited text messages. Until the early 1990s, they were seen as the height of twentieth century communications technology. But kids, before you start feeling smug, in 20-years everyone’s going to think all this Twitterbook and Facetweeting you do is a bunch of backward tomfoolery. You’ve been warned.

In recent years, James Bond and Jason Bourne have popularised a whizz bang view of the espionage world. One where agents hack into top secret files with a few seconds of computer wizardry, dispose of the guards with their mixed martial arts skills before parkouring their way to safety.

Spy Game, though, paints a decidedly old-school picture of the world of espionage. One where fragments of intelligence are painstakingly pieced together after hours spent poring over dusty brown folders.

Which therefore makes the choice of Tony Scott to direct utterly perplexing. Famed for his fidgety camerawork, rapid cutting and over the top approach to filmmaking, he would seem the perfect choice for the latest Tom Clancy rather than this Le Carre-esque tale of spycraft.

The exploding helicopter sequence isn’t the only scene in the film where the producers looked to save money on the chopper related budget of the film. According to IMDB, Tony Scott wanted extra money in order to use a helicopter to film a scene that takes place on the roof of a tower block.

When the producers refused, Scott used his own money to pay for a helicopter. I just wish he’d thrown the money at the chopper fireball scene instead and given us a better thrill.

In one scene, Redford’s character dispenses a little advice to his young protégé: “When did Noah build the ark? Before the rain.” Given Redford creaky appearance, it’s fair guess he was talking from first-hand experience.

Still want more? Then check out the Exploding Helicopter podcast episode on Spy Game. You can listen via iTunes, Spotify, Player FM, Acast and Stitcher. Or right here and now....

Posted by Exploding Helicopter at 18:56