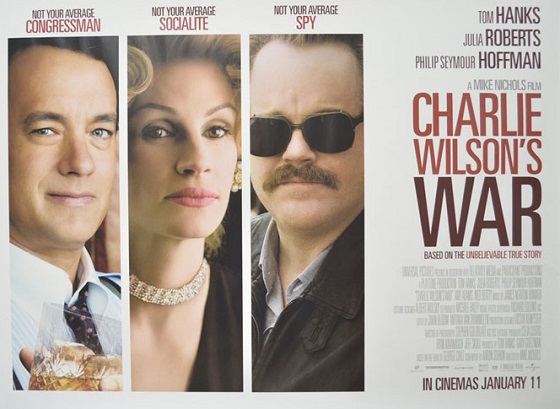 Charlie Wilson (Tom Hanks) is little known member of Congress who uses his relative obscurity to enjoy a playboy lifestyle of women, alcohol, but definitely no drugs. But in reality, he wields great influence as a member of a secret committee overseeing covert CIA operations.
Believing Afghanistan to be the key battle ground in the Cold War, he creates an unlikely coalition of bedfellows to supply the Mujahideen with more sophisticated weaponry to fight the Russian invasion.
In a zippy montage, the newly equipped Afghanis quickly defeat the Soviet Union. Within a few short years Communism collapses and everyone in America and Afghanistan lives happily ever after. Only, of course they don’t.
And there’s the rub. Because this is a very peculiar film.
The story retells the political events that shaped our recent history. Essentially how the Cold War became the War on Terror.
Yet, this is presented as a glossy comedy as if those self-same events were about some long forgotten diplomatic incident with no real-world consequences.
These contradictory elements are thrown into acute focus when the film shows us Wilson’s conversion to the Afghani cause. Visiting a refugee camp, he’s moved by the tales he hears of the war’s horror.
Quite why Wilson, a man overseeing the CIA’s covert operations to prop up murderous dictators as long as they were helpful to Uncle Same, would be overcome by the humanitarian plight in front of him is never explained.
Unfortunately, such simplicity runs throughout the film. Director Mike Nichols (The Graduate, Catch 22, The Birdcage) and scriptwriter Aaron Sorkin (The West Wing) attempt to acknowledge the context and consequences of the events their showing in a few cursory scenes tacked on the end. But it’s a case of too little, too late.
But hey, for all this the film’s plot hinges on arming the Mujahideen with weapons to shoot down Soviet helicopters so it cannot be all bad.
The culmination of Wilson’s efforts come when a group of Afghani’s bring down three Hind helicopters with rocket launchers.
As the Hinds open fire on a group of civilians, the Afghanis fire off their newly acquired stinger missiles, blowing them up. We then see a further three helicopters destroyed. Two certainly look like archival footage which is incorporated into the film throughout. Whilst a third looks a combination of old news reel plus a contemporaneous footage.
Artistic merit
Director Nichols has made some terrific comedies and dramas, but he is at a loss with how to shoot an action sequence. The choice of shots and editing are painfully dated, with Nichols somehow making a scene with three helicopters blowing up a disappointment.
As for the archival footage showing another three helicopters exploding, we are watching real people die. Therefore, it is not becoming for Exploding Helicopter to provide an artistic critique.
Number of exploding helicopters
6.
Positives
Philip Seymour Hoffman is predictably excellent in his supporting role. His introductory scene makes it seems like it’s going to be a histrionic performance, but it soon settles down into a low key acerbic portrayal of his character.
Negatives
Julia Roberts plays a wealthy Texan neo-con who wants American to intercede on the side of the Afghanis. Her performance descends into grotesque caricature and is not aided by a face nearly which appears paralysed by botox injections.
Favourite quote
“I told you all we had to do was shoot down the helicopters.”
Interesting fact
Director Mike Nichols was at one time interested in making Rambo’s First Blood but with Dustin Hoffman in the lead. Sadly, it's not documented if Nichols ever considered doing The Graduate with Sylvester Stallone.