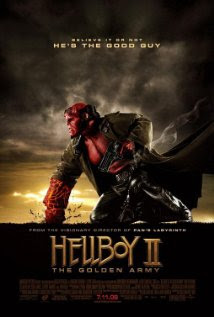 I really wasn’t expecting a lot from Hellboy II (2008). I hadn‘t seen the first film, and I‘ve seen too many poor films based on comic books to have much faith in this. I could easily have not bothered to watch this.

But I love it when a film takes you by surprise. And Hellboy II snuck up behind me and stuck an ice cube down the back of my shirt. This is a really good film.

Ron Perlman returns as denizen of hell who works secretly for the US government. His team of paranormal investigators are called in after Prince Nuada (Luke Goss) - who lives in a parallel unseen world - attempts to reclaim all the pieces to a crown which will allow him to command an invincible army. Nuada’s ultimate aim being to reclaim the world from humans. Can Hellboy stop him?

This is an immensely likeable film. Ron Perlman is excellent as Hellboy vividly drawing him as impulsive and impetuous with a nice sideline in grouchy humour. A decidedly un-heroic hero.

Guillermo Del Toro has a wonderful gift for creating imaginary worlds and rendering them on screen. And there’s plenty of his artistic hallmarks on screen where mechanical objects can become organic, living, breathing things. 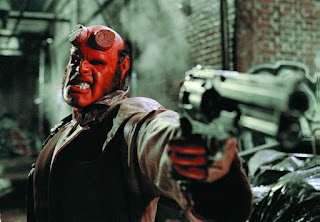 While it is has a great blend of imaginative fancy, humour and action, it does still have flaws. The script can find no useful role for Hellboy’s colleagues in the Paranormal Investigations unit. Selma Blair as Liz Sherman has absolutely nothing to do in the film as does Doug Jones as Abe Sapien.

Indeed Sherman’s pregnancy subplot seems like a desperate attempt to give Blair some reason for being in the film. It adds nothing, goes nowhere, and all told is a complete irrelevance.

But this is to nit pick. Colourful and imaginative, entertaining throughout, Hellboy II is a film which wears its many qualities lightly.

So we come to the most important aspect of the film, the helicopter explosion. Our heroes track down Prince Nuada, who unleashes a forest demon, which looks a gigantic, stick of celery with tentacles. Alerted to the havoc being wrought on the streets a news crew in a helicopter fly past. The forest demon picks up a car and hurls it at the chopper which unsurprisingly bursts into flame. 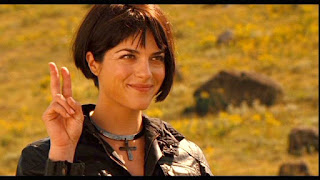 Having rightly lauded Del Toro for the creativity and imagination he’s realised this film, I have to say he didn’t bother too much with this sequence.

The explosion is disappointingly brief. There’s no falling wreckage, no rotor blades sheering off, just a fireball which fills the screen and a cut back to events on street level. Come on man! You’ve created how world’s couldn’t you have expended just a little bit energy on this chopper fireball?

First known helicopter destroyed by a giant piece of celery.

It should be noted that this is not the first helicopter to be destroyed by the use of a car as a projectile missile. Die Hard 4.0 demonstrated just how such a sequence should be done. 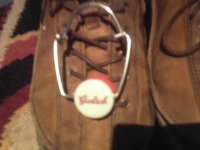 Hellboy II stars a barely recognisable Luke Goss as Prince Nuada. Goss was an 80s pop star in the group Bros before turning his hand to acting. For a short time they were massive - in the UK at least - single handedly starting a craze where people wore Grolsch bottle tops on their shoes. Bizarre.

Before this film Goss had worked with both Perlman and Del Toro before on Blade II.

Review by: Jafo
Posted by Exploding Helicopter at 22:06