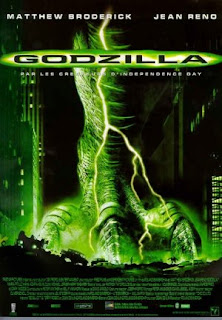 Whose idea was it to make Godzilla pregnant? Godzilla is a lean, mean, building stomping machine. Godzilla is not a lactating parent with post natal depression. It’s the most ridiculous pregnancy plot since Arnold Schwarzenegger gave birth in Junior.

I can confirm all the charges levelled at this blockbuster are justified. Matthew Broaderick doesn’t convince as the scientist. Why would a guy who studies worms for living repeatedly risk his life to save New York?

The romantic sub plot with Maria Pitillo was bad enough without being saddled with her dreadful performance.  And at 2hrs 20mins the film’s in dire need of a trim.

If there were any plausible plot points in the script someone rounded them all up, paid them off, and told them they were never going to appear in this film. 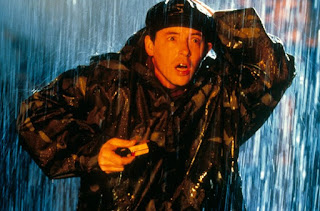 For example, one minute Godzilla is towering above buildings the next he’s disappearing into underground tunnels presumably too small for him. Equally as problematic is the question of how a giant, massively destructive reptile repeatedly eludes the world’s best equipped army.

And that’s without mentioning Jean Reno and his merry band of French special forces. Why are they so intent on destroying Godzilla and saving New York? I can only guess this was filmed before the French became cheese eating surrender monkeys who wanted nothing more than the destruction of the US. But anyway I digress.

So what can I add to the body of criticism for this film? Why a detailed appreciation of the exploding helicopter action in the film, that’s what. 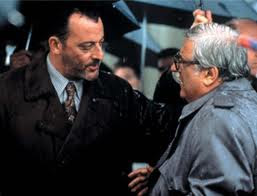 So Godzilla is now chewing up half of New York and the military have been brought in to save the day. Some helicopters pick of trail of the Godzilla. Unfortunately their heat seeking missiles don’t lock as everyone’s forgotten their junior school biology lessons which would’ve taught them that reptiles are cold-blooded. Doh!

It appears like this scene is a subtle homage to Star Wars. The whole sequence is reminiscent of the trench run scenes in Star Wars. The graphics for the helicopter targeting system and lines of dialogue are very similar.

But that aside, despite being a massive sky scraper sized mutant lizard Godzilla manages to elude the pursuing choppers. They think they’ve got him cornered but he suddenly comes crashing through the building behind the hovering helicopters. Godzilla lashes out with his arm and sends one chopper crashing into the side of a building, before chomping his teeth down onto another one like it’s tasty airborne snack.

The remaining chopper tries to flee chased by Godzilla. The helicopter looks certain to be caught, but suddenly Godzilla disappears. The pilot radios in that he’s managed to shake off the beast. Phew!

Only somehow Godzilla has got in front and underneath the helicopter and suddenly rears upwards and chews up the third and final chopper. Who would‘ve thunk it!

Excellent. This is an action set piece in a big budget blockbuster so director Roland Emmerich makes sure he wrings as much juice out the sequence as possible. Having Godzilla smash through the building behind the choppers was a genuinely good sleight of hand. And who doesn’t want to see a helicopter get eaten?

First known destruction of helicopters by a giant, mutant, reptile.

We’re no fans of CGI but in the $100 million plus production it’s no surprise that all the explosions are well executed.

A regular grumble of exploding helicopter sequences is pilots making decisions which defy logic, but are mightily convenient for the plot. For example, when being chased by Godzilla why doesn’t the helicopter pilot simply increase his altitude and take himself out of harm’s way? Equally, how can Godzilla keep pace with an Apache attack helicopter which has a top speed of 182mph?

Jean Reno doesn’t understand English. Apparently. This nugget was mentioned in the audio commentary to the Rollerball remake. Yes, masochist that I am I didn’t think I’d punished myself enough by watching that dreck, I thought I’d watch the whole thing again with cast members wittering away over it.

Review by: Jafo
Posted by Exploding Helicopter at 10:43