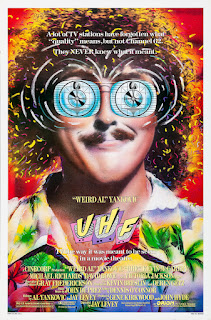 "Weird" Al Yakovic is not a man whose career you'd immediately connect with exploding helicopters. A singer and songwriter whose musical career has mostly rested on redoing popular songs with new lyrics that focus on either food or nerdy inside jokes, Weird Al did have his first and only shot at creating a feature comedy in the late 1980's with UHF, and decided to use it as a context to create a series of spoofs for a number of prevalent movies of that day.
These skits are also an easy way to let Al take his brand of parody (i.e. take something popular and change a few words) to the big screen without having to put together a cohesive plot. The clothesline that runs through this one is that Al has been left a rundown television station to handle, and gets an unexpected hit when doofy janitor Stanley Spudowski (Michael Richards) becomes an overnight sensation. It's up to Al, Stanley and a host of other "weird" characters to keep their station from being put out by their scenery chewing rival television station owning nemesis (Kevin McCarthy).
The lengthiest parody sequence in the movie - these sequences are either portrayed as fictional films within this film, or as an elaborate fantasy sequence by Al - involves a recreation of Rambo: First Blood Part II and Rambo III. As these two films are benchmarks for helicopter explosions, it's no surprise that during this parody a helicopter meets its inevitable fate.
Unfortunately, this film had a very low budget. That makes the special effects, as they are, charming, but the fantasy helicopter battle a little underwhelming. Both helicopters used in this sequence are repainted surplus from the looks of it, and the explosion, when it arrives, happens with simply a large explosion on the screen happening in the foreground of the action while the enemy helicopter remains intact behind.
It's obvious that Al along with longtime friend and director Jay Levey had little interest in the legitimacy for the scene, though considering the high camp that was happening all around, this fireball was probably as silly as they could manage.
Artistic merit
Yankovic's brief chopper sojourn results in the destruction of not only a rival helicopter but a great number of landmarks. The Eiffel Tower, the Coliseum and the Hollywood sign are all the victims of a torrent of helicopter fire. I'm willing to wager this is the single most destructive helicopter attack in cinematic history.
Exploding helicopter innovation
The explosion, despite the carnage that follows, is fairly underwhelming. It does kill the main villain of the film, though it's still only in a fantasy sequence, so McCarthy actually manages to live until the end. Hopes that another climactic helicopter battle - perhaps one outside of the confines of Al's limited imagination - are dashed, and the worst of what McCarthy receives is the complete destruction of his life's work and a swift kick in the nads.
Number of exploding helicopters
One.
Positives
The sheer destructive capacity of Yankovic's helicopter, though obviously exaggerated, is nonetheless incredible to imagine.
Negatives
The helicopters as presented are both generic looking and cheap. Orion was running on fumes at this point, and this film's budget seems to be a victim.
For the movie, since the plot relies on a series of pop culture parodies that rely on an intense knowledge of late 80's pop culture, it's a very hit or miss affair. Al sometimes seems out of his depth as an actor, and the film's cheap look is only counterbalanced by some good gags and a generic but sweet message.
Favourite quote
"For those of you just joining us, today we're teaching poodles how to fly. Come here., Foofy. Ah, Foofy. Are you psyched? Are you ready? Okay... Here we go. Get ready. And... FLY! .... Oh, man... You know, sometimes it takes them a little longer to learn how to do it right. Okay, come on. Come on. Cheer up. Cheer up. Eh, eh, eh. Who's next? Ah, Gigi!"
Interesting fact
Originally the part of Philo was written for Weird Al's friend, Joel Hodgson, of Mystery Science Theater and Cinematic Titanic fame. He turned it down; too bad, his unremittingly laconic style would have been fun to watch.
We're pleased to be able to host this guest post from Danny over at Can't Stop The Movies who do great work reviewing every piece of celluloid that's slid, sped or spooled through a film projector.
Posted by Exploding Helicopter at 11:25